Solar jobs and wealth creation in Europe are set to increase tonearly 175,000 full time jobs and 9,500M value added by 2021, according to a new EYreport.

The EY report also shows that an increase in ambition for the European Union 2030renewable energy target from 27% to 35% will result in more than 120,000 new solar jobsalone.

MEP Marijana Petir, stated “This surge is only possible if countries increase their solardeployment rate in line with policy requirements to 2020. With the right policies in place thisgrowth could be even greater by 2030. Member States should have the necessary flexibilityto boost renewable energy that is available on their territory. With this approach Memberstates could develop incentives to reduce the greenhouse gas emissions and to create newjobs in the most efficient way.”

Christian Westermeier, President of SolarPower Europe said: “The more solar installed themore jobs and economic growth we will see in Europe. We need to remove all barriers tosolar starting with withdrawing the trade measures currently in place on solar panels andcells accompanied by a predictable regulatory environment for PV in Europe. EY found thatthe average PV system price in Europe has decreased by 23% in 2016, compared to 2014,but we know that the price could be even lower if we ended the artificially high tariffs on solarproducts, which would boost jobs and economic activity in the countries of the EU.” 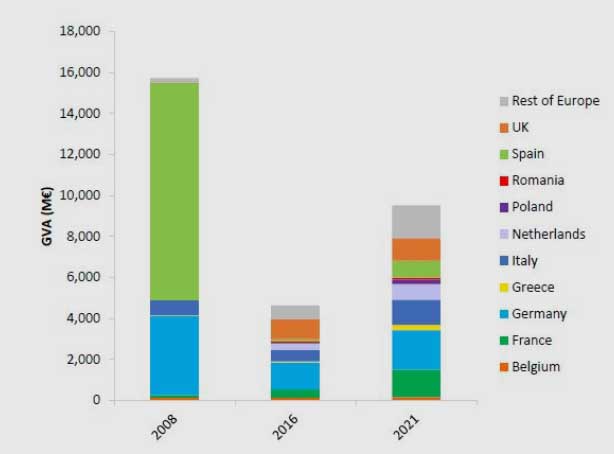