Ecological and climate breakdown share many of the same drivers: notably, the destruction of forests and other natural ecosystems by industrial agriculture.

80% of global deforestation is a result of agricultural production, which is also the leading cause of habitat destruction. Animal agriculture – livestock and animal feed – is a significant driver of deforestation, and is also responsible for approximately 60% of direct global greenhouse gas (GHG) emissions from agriculture.

Halting deforestation and restoring the world’s forests is the cheapest and fastest way to reduce GHG emissions and ensure rapid carbon uptake.

At the 2010 United Nations Climate Change Conference in Cancun, members of the Consumer Goods Forum (CGF) committed to eliminating deforestation by 2020 through the responsible sourcing of the commodities most linked to forest destruction: cattle, palm oil, pulp and paper, and soya.

Yet, despite these commitments, global commodity production remains a leading cause of forest destruction. Analysis by Greenpeace International suggests that, by the start of 2020, some 50 million hectares of forest – an area the size of Spain – are likely to have been destroyed for global commodity production since those promises were made in 2010.

In early 2019, Greenpeace challenged more than 50 traders, retailers, producers, and consumer goods companies to demonstrate their progress towards ending deforestation by disclosing their cattle, cocoa, dairy, palm oil, pulp and paper, and soya suppliers. Not a single company was able to demonstrate meaningful effort to eradicate deforestation from its supply chain.

We have just over a decade to get GHG emissions under control if we are to limit global warming to below 1.5°C. Preventing climate and ecological breakdown will require transformative changes to the way forests are managed and agricultural commodities are produced, dramatic reductions in meat and dairy consumption and the phasing out of crop-based biofuels and bioplastics.

The onus is on brands that use high-risk commodities like beef, palm oil, and soya to demonstrate that their supply chains are free from deforestation. Brands must also slash their use of meat and dairy, leading to a more than 70% reduction in per capita consumption in high-consuming areas such as North America and Europe by 2030. This means replacing industrially produced milk, pork, beef, and poultry products with healthy and affordable plant-based foods.

Faced with the climate and ecological emergency, companies have a stark choice – evolve their businesses or start winding down.

To download our report click on the cover above, or use the link below: Countdown to Extinction report 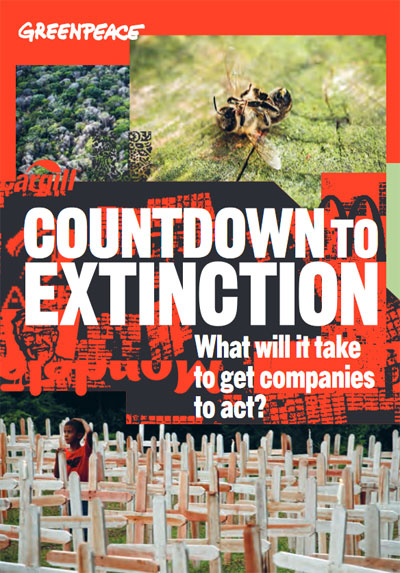