Living within a mile of active wells has been correlated to increased risk for heart and neurological problems, cancers and adverse birth outcomes.

An estimated 17.6 million Americans live within one mile of an active oil or gas well, according to a study published (August 23), in Environmental Health Perspectives, a peer-reviewed open access journal published by the National Institute of Environmental Health Sciences. The study, by researchers at PSE Healthy Energy, a nonprofit research institute; the University of California, Berkeley; and Harvey Mudd College, is the first peer-reviewed nationwide measurement of the number of people living in close proximity to actively producing oil and gas wells.

Studies have found that active oil and gas production degrades the quality of air, surface water and groundwater; contaminates soil; and elevates exposures to noise and light pollution. When people live within a mile of these operations, they have a higher risk of being hospitalized for numerous medical issues, including heart and neurological problems, cancers and increased asthma incidence and severity, according to separate peer-reviewed studies. Residential proximity to these operations has also been associated with adverse birth outcomes, including pre-term birth, lower birth weight, neural tube defects and congenital heart defects.

“When one in two members of a population are potentially exposed to a health risk, that’s a significant public-health concern.”

But only a few peer-reviewed studies quantifying populations in proximity to these operations have been published, and those studies do not tie pollution emissions to specific types of oil and gas development operations.

“Our study was specifically designed to determine how many Americans have increased health risks from potential exposure to pollutants emitted from oil and gas development,” said Eliza Czolowski, a research associate at PSE and lead author on the study.

“When one in two members of a population are potentially exposed to a health risk, that’s a significant public-health concern,” Czolowski said.

The researchers looked at hydraulic fracturing (fracking) wells, which typically use sand, water and chemicals to release oil or gas from rock formations — a process generally referred to as “unconventional” — as well as active conventional oil and gas wells.

“Despite the differences in conventional and unconventional oil production techniques, the health risks can be very similar,” Czolowski said. Many air pollutants, including benzene, formaldehyde and particulate matter, are emitted from both conventional and unconventional operations because they are co-produced with oil and gas, not specifically because a well is hydraulically fractured, Czolowski explained. Emissions of air pollutants from associated activities such as well drilling and truck traffic are also not specific to hydraulic fracturing.

The researchers note that some of the well data they sought was unavailable. They encourage additional studies that follow similar rigorous, public-health focused methodologies, especially those that take well density — a variable excluded from their analyses — into account.

The study concludes that given the large number of individuals and large percentages of populations potentially exposed to pollutants emitted from oil and gas development, protective regulations and policies should be considered. Health-protective policies could include minimum distances between these operations and places where people live, play and learn, as well as the wide deployment of the best available air pollution-reduction technologies. 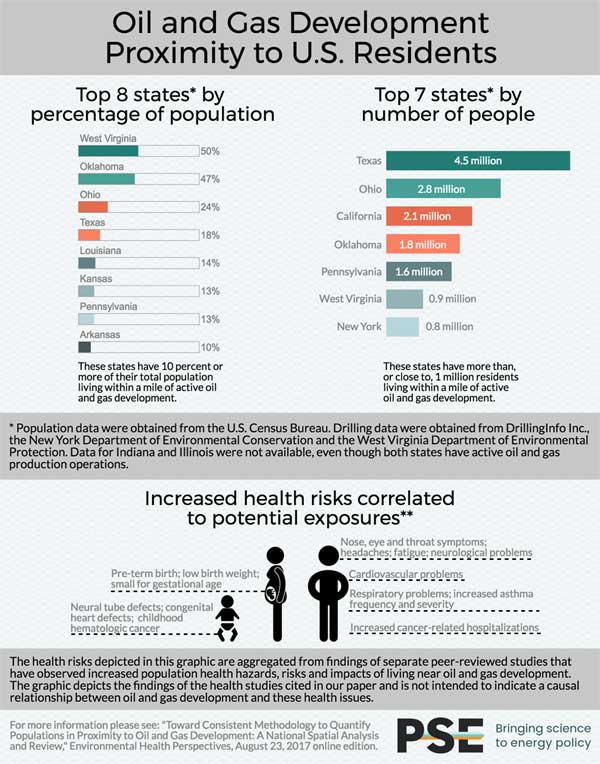