On June 11, the German partners of the three-year EU project AbattReLife presented their results on a final conference at the Fraunhofer Institute for Silicate Research ISC in Würzburg.

The final event organized by Bayern Innovativ was associated with two workshops and a tour of the new laboratory and technical facilities for electrochemistry, analysis and coating Fraunhofer ISC. During a period of three years the project partners studied in five project steps what causes aging of electric vehicle batteries and what could stop the aging process or at least slow it down. Also they were looking for secondary uses or a final recycling of aged batteries.

Simon Schuster from the Technical University of Munich explained the impact of different operating conditions during charging and discharging on the aging behavior. In electro mobility a residual capacity of 80% is usually defined as the end of life. Up to this value lithium-ion batteries age at moderate and constant speed. But some batteries with a capacity lower than 80% change their behavior. The power curve is experiencing a significant bend and nonlinear aging begins. This is favored by excessive charge rates, too high loading capacities, and very low temperatures. The project showed that it was possible to delay aging by reducing loading capacities, limiting voltage, and raising temperatures, ideally to around 35 °C.

Tobias Bach, project manager of ABattReLife at the Fraunhofer ISC, examined the components of the battery cells which showed visible changes. While the positive electrode changed little, the negative graphite electrode was affected by micro fractures, deposits and a metallic lithium veil. In order to avoid alteration of the batteries during examination, they were opened under safety glass. To investigate the batteries in a space-resolved way, small laboratory cells were built from different parts of the electrodes. Shortly before the extreme bend of performance small areas showed significant changes, the so-called lithium plating. With computed tomography, the scientists at the Fraunhofer ISC discovered that the conductor compressed these areas stronger than the rest of the battery. This indicates that pressure produces a local overload, which leads to massive loss of lithium and completely destroys this part of the battery. Since the plating is irreversible, the process overlaps other areas – the battery has reached its end. Thus means some types of batteries are not suitable for a second life. The process of lithium plating has to be taken in account in order to reuse batteries for stationary applications.

But many batteries previously used in electric vehicles will find a secondary use. Bernd Baumgartner, Managing Director of Beck Automation, presented examples for local energy storage devices, such as used in the Vattenfall Infopavillon in Hamburg. The energy storage devices developed by Beck Automation were to fulfill several requirements. They were to be made of readily available components, have a wide range of applications, be easy to establish everywhere and were to be open to subsequent adjustments. BMW provided used battery modules. The goal of the ongoing project is to support self-supply, to relieve the power system, to compensate peaks, to provide electricity in case of emergency, and to optimize loading processes throughout the day.

Anna Gellner and Lutz Wuschke of the Technical University of Freiberg developed a mechanical recycling process for batteries of electric vehicles. In contrast to existing technologies they searched for an effective, low priced method that recovers more raw materials. They developed a mechanical crushing method to sort the materials using filters, magnets and gravity, and so were able to recover more than 50% of the resources. During the development, however, it became clear that the process had to be adapted to the different types of battery and that the effort depends highly on the different components. The recycling process has already been optimized in order to use it on a pilot scale. The question remains, whether greater effort is justified from the economical point of view.

During the tour of the Fraunhofer ISC laboratory and technical facilities for electriochemistry, analysis and coating, Tobias Bach showed the individual workstations, including the highly specialized equipment that was used to study battery cells with post-mortem analysis, and answered further questions about the project.

In the two final workshops, the participants were able to discuss their ideas and questions with the project partners. The focus was on the operating and environmental conditions that affect the aging mechanism, as well as on the opportunities and risks involved in second-life use of battery cells.

More information about the EU project can be found on www.abattrelife.eu. 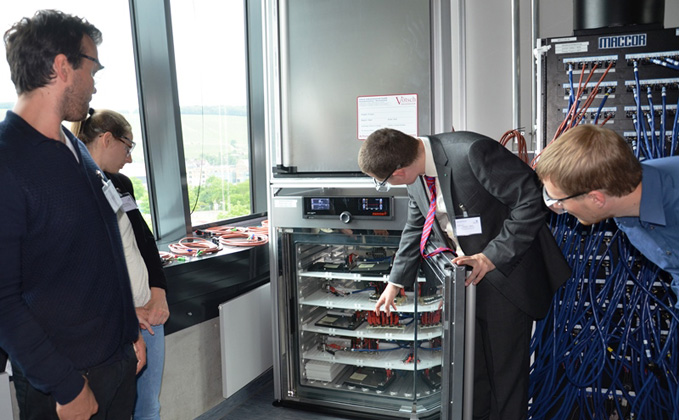