Solar commitments declined 24% in dollar terms even though there was record new photovoltaic capacity added, breaking 100GW barrier for the first time.

Global clean energy investment[1] totaled $332.1 billion in 2018, down 8% on 2017. Last year was the fifth in a row in which investment exceeded the $300 billion mark, according to authoritative figures from research company BloombergNEF (BNEF).

There were sharp contrasts between clean energy sectors in terms of the change in dollar investment last year. Wind investment rose 3% to $128.6 billion, with offshore wind having its second-highest year. Money committed to smart meter rollouts and electric vehicle company financings also increased.

However, the most striking shifts were in solar. Overall investment in that sector dropped 24% to $130.8 billion. Part of this reduction was due to sharply declining capital costs. BNEF’s global benchmark for the cost of installing a megawatt of photovoltaic capacity fell 12% in 2018 as manufacturers slashed selling prices in the face of a glut of PV modules on the world market.

That surplus was aggravated by a sharp change in policy in China in mid-year. The government acted to cool that country’s solar boom by restricting access for new projects to its feed-in tariff. The result of this, combined with lower unit costs, was that Chinese solar investment plunged 53% to $40.4 billion in 2018.

Jenny Chase, head of solar analysis at BNEF, commented: “2018 was certainly a difficult year for many solar manufacturers, and for developers in China. However, we estimate that global PV installations increased from 99GW in 2017 to approximately 109GW in 2018, as other countries took advantage of the technology’s fiercely improved competitiveness.”

The biggest solar projects financed included the 800MW NOORm Midelt PV and solar thermal portfolio in Morocco, at an estimated $2.4 billion, and the 709MW NLC Tangedco PV plant in India, at a cost of about $500 million. India is one of the countries with the lowest capital costs per megawatt for photovoltaic plants.

Offshore wind was a major recipient of clean energy investment last year, attracting $25.7 billion, up 14% on the previous year. Some of the projects financed were in Europe, led by the 950MW Moray Firth East array in the North Sea, at an estimated $3.3 billion, but there were also 13 Chinese offshore wind farms starting construction, for a total of some $11.4 billion.

David Hostert, head of wind analysis at BNEF, said: “The balance of activity in offshore is tilting. Countries such as the U.K. and Germany pioneered this industry and will remain important, but China is taking over as the biggest market and new locations such as Taiwan and the U.S. East Coast are seeing strong interest from developers.”

Onshore wind saw $100.8 billion of new asset finance globally last year, up 2%, with the biggest projects reaching go-ahead including the 706MW Enel Green Power South Africa portfolio, at an estimated $1.4 billion, and the Xcel Rush Creek installation in the U.S., at $1 billion for 600MW.

Among other renewable energy sectors, investment in biomass and waste-to-energy rose 18% to $6.3 billion, while that in biofuels rallied 47% to $3 billion. Geothermal was up 10% at $1.8 billion, small hydro down 50% at $1.7 billion and marine up 16% at $180 million. Total investment in utility-scale renewable energy projects and small-scale solar systems worldwide was down 13% year-on-year at $256.5 billion, although the gigawatt capacity added increased.

Global venture capital and private equity investment jumped 127% to $9.2 billion, the highest since 2010. The biggest deals were $1.1 billion of expansion capital for U.S. smart window maker View, and $795 million for Chinese electric vehicle firm Youxia Motors. In fact, there were no fewer than eight VC/PE financings of Chinese EV specialist companies in 2018, totaling some $3.3 billion.

Looking at the 2018 clean energy investment numbers by country, China was again the clear leader, but its total of $100.1 billion was down 32% on 2017’s record figure because of the plunge in the value of solar commitments.

Jon Moore, chief executive of BNEF, commented: “Once again, the actions of China are playing a major role in the dynamics of the energy transition, helping to drive down solar costs, grow the offshore wind and EV markets and lift venture capital and private equity investment.”

The U.S. was the second-biggest investing country, at $64.2 billion, up 12%. Developers have been rushing to finance wind and solar projects in order to take advantage of tax credit incentives, before these expire early next decade. There has also been a boom, in both the U.S. and Europe, in the construction of projects benefitting from power purchase agreements signed by big corporations such as Facebook and Google.

Europe saw clean energy investment leap 27% to $74.5 billion, helped by the financing of five offshore wind projects in the billion-dollar-plus category. There was also a sharp recovery in the Spanish solar market, helped by heavily reduced costs, and a continuation of the build-out of large wind farms in Sweden and Norway offering low-cost electricity to industrial consumers.

Other countries and territories investing in excess of $2 billion in clean energy in 2018 were:

More on BNEF’s 2018 clean energy investment figures can be found at https://about.bnef.com/clean-energy-investment/. 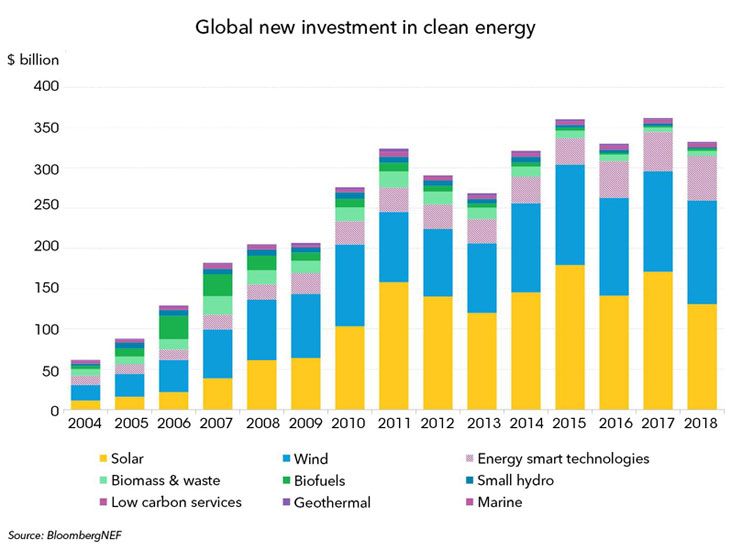 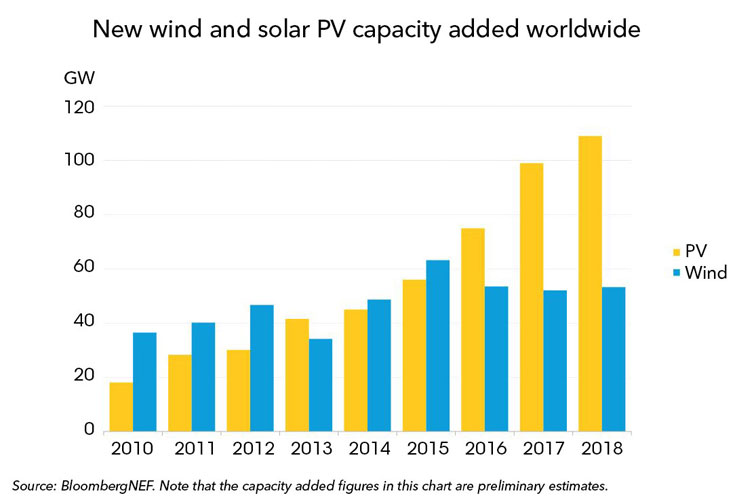