Long-lasting contamination won’t be cleaned up by ash removal alone.

A Duke University study of coal ash ponds near 21 power plants in five Southeastern U.S. states has found evidence that nearby surface waters and groundwater are consistently and lastingly contaminated by the unlined ponds.

High levels of toxic heavy metals including arsenic and selenium were found in surface waters or groundwater at all of the sites tested. Concentrations of trace elements in 29 percent of the surface water samples exceeded EPA standards for drinking water and aquatic life.

“In all the investigated sites, we saw evidence of leaking,” said Avner Vengosh, a professor of geochemistry and water quality in Duke University’s Nicholas School of the Environment. “Some of the impacted water had high levels of contaminants.”

The study, which appears June 10 in the journal Environmental Science & Technology, did not test drinking water wells, but that will be the next phase of the research, Vengosh said.

During the summer and fall of 2015, the team sampled 39 surface water and seep samples from coal ash ponds at seven sites. They also analyzed water chemistry data from 156 shallow groundwater monitoring wells near coal ash ponds at 14 North Carolina power plants that had been compiled by the state’s Department of Environmental Quality.

Shallow wells — typically 30- to 50-feet deep — are not as deep as a drinking water well, which might be 100 to 300 feet. But there’s a potential the shallower contamination could flow deeper and affect drinking wells, Vengosh said.

Not only was the evidence of contamination widespread, it also appears to be persistent in the environment. Some of the sites studied have been retired and no new coal ash is being deposited there, but nearby surface waters, and in one case groundwater, were still being contaminated.

“The degree to which leakage affects the concentration of toxins in nearby waters varies because of several factors, including the nature of the coal ash, processes in the pond and the flow through the local soil,” said Jennie Harkness, a Ph.D. student at the Nicholas School and the lead author of this study.

While it is legally permitted for some coal ash ponds to release liquid effluents to nearby surface waters through regulated outfalls, the new data show that these ponds are also leaking in unpermitted ways. “Coal ash ponds pose risks to the environment and water resources,” Vengosh said.

The highest concentrations of dissolved metals and metalloids (manganese, vanadium, selenium, arsenic and molybdenum) were found in shallow wells near a retired ash-disposal site in Tennessee.  The contaminated groundwater there had concentrations exceeding drinking water and aquatic life standards for cadmium, iron, nickel, lead, selenium and zinc.

Vengosh said it is reasonable to conclude from these findings that physically removing the coal ash ponds would leave “a legacy of contamination. You would still have a major issue to address the subsurface groundwater contamination. After decades of leaking, the impact has already happened.”

Funding for this study was provided by the Southern Environmental Law Center. 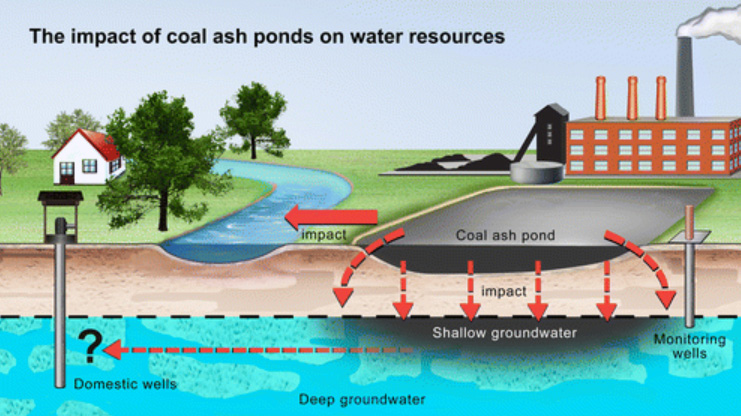