The EU-supported “SmartFlex Solarfacades” project has successfully completed the test operation of its referece solar façade. A glass façade featuring a wide range of semi-transparent solar modules that had been custom-designed but industrially manufactured was installed as a “second skin” on the office building of the Lithuanian glass processor Glassbel. The exceptional size and weight of the modules proved particularly challenging during the manufacturing process. The project has demonstrated how custom-designed solar façades represent not only an aesthetically appealing solution, but also a financially viable means of achieving climate targets in buildings.

The 75 glass-glass modules produce around 12.5 megawatt hours of electricity every year. The photovoltaic system, which has an output of more than 15 kilowatt peak (kWpeak), was installed on a surface area of 600m² on the south and west façades of the Glassbel office building in Klaipeda, Lithuania, in November of last year. The solar façade provided the architects with an abundance of design possibilities. 15 different types of glass-glass modules were used on the reference building.

“Printed module glass, laminating films of various colours and differently coloured solar cells can be used to custom design solar façades any way you like. The biggest challenge with our solar façade was producing the glass-glass modules, which were very large and very heavy. The largest were 3.6 metres long and 1.7 meters wide,” says Tomas Lenkimas, Head of Glassbel’s R&D department. “In contrast, applying the photo print onto the module glass was relatively easy. The installation of the façades, which was carried out by a specialist façade engineering company, also went very smoothly.”

To measure the yield, one of the project partners, the renowned Photovoltaik-Institut Berlin (PI Berlin), installed a weather and measuring station on the roof of the office building and tested the modules on-site. “The PV system has now been operational for six months. Based on the monitoring data we’ve gathered so far, we predict that the system’s specific yield could be up to 800 kilowatt hour per kWpeak,” explains Thomas Weber, project manager at PI Berlin. “Thanks to our close examination during the commissioning phase we were able to suggest some improvements, which led to a 25% increase in earnings in parts of the plant. This knowledge will help us to develop the Smart-FLeX products in future projects, “says Weber.

According to the calculations of the project partners, the acquisition costs of a “second skin” solar façade – at around €550 per square meter – are approximately the same as for a façade made of stone or metal, but are significantly lower than those of a glass-window façade, which can cost up to €840 per square meter.

“We even identified further cost-saving potentials during the project. But it is already clear from the test system that customised solar façades represent not only an aesthetically attractive, but also a financially viable alternative to other types of façades,” says Dr Juras Ulbikas, Senior Researcher at the Applied Research Institute for Prospective Technologies (ProTech) in Lithuania and Coordinator of the SmartFlex project. “Furthermore, installing solar façades can help in the effort to meet statutory climate protection targets for buildings.”

“An unexpected side effect of the solar façade, and one that is great for those of us who work here, is that it keeps the building cool. We’ve all noticed that the indoor climate is now much more pleasant. The partial shading from the solar cells improves the heat transfer trough the facade, but we still have an almost unimpeded view of our surroundings. We can even let some air in when it’s raining because the second façade keeps the wind and weather at bay,” explains Tomas Lenkimas. 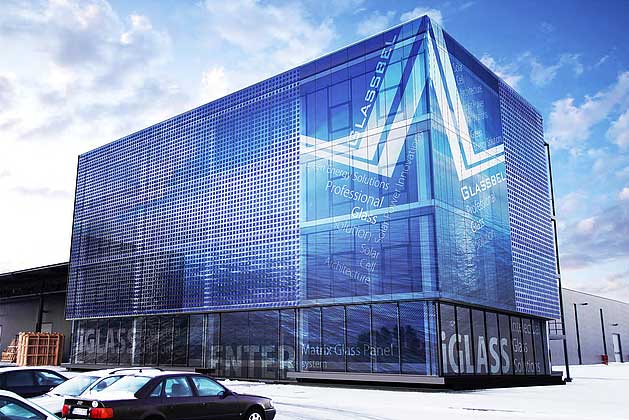