Power generation in the EU became much more climate friendly in 2016. CO2 emissions from power plants in the EU-28 declined by 4.5 per cent. The primary reason for this drop was the increased use of natural gas instead of coal for power generation, a trend that was most pronounced in the UK, but also in Italy, the Netherlands, Germany and Greece. Last year’s decline in CO2 emissions was possible despite a 0.5 per cent increase in electricity consumption across the EU, as the increase in production from renewables fully covered rising demand. This analysis originates from a report released today, titled “Energy Transition in the Power Sector in Europe: State of Affairs in 2016”. The study was carried out by the German energy think tank Agora Energiewende in cooperation with the British think tank Sandbag.

According to the study, the share of renewables in the European power mix rose from 29.2 to 29.6 per cent. Renewables thus remain the leading source of electricity ahead of nuclear, which had a 26.3% share. Wind and solar conditions were not particularly favourable last year, and as a result, wind and PV production barely exceeded 2015 levels. New growth was also below trend – although new wind installations were high, new solar and biomass were well below trend. However, the authors of the report have hope of stronger growth in green electricity in 2017 and beyond due to the recent and drastic fall in the cost of PV and offshore wind electricity. Both PV and wind are now the cheapest sources of new power in many parts of Europe.

Does the 2016 shift from coal to natural gas represent a lasting development? The authors say this is very uncertain. The shift was driven by the closure of many coal plants, and switch in the coal-gas economics by the extremely low natural gas prices that prevailed in the later months of the year. The outlook is currently dim: there are very few coal plant closures announced to 2020, the gas price has risen back above the price of coal, and the proposed reforms for the European Emissions Trading System (EU ETS) are unlikely to significantly raise the carbon price.

“The massive reserve of excess certificates in combination with continued oversupply means the EU ETS cannot set incentives for climate friendly investment up to 2030 in the absence of fundamental reform. As a result, the ETS is not fulfilling its core purpose”, says Patrick Graichen, Director of Agora Energiewende. “Effective incentives are only found in the UK, which has introduced a minimum price for CO2 emissions. This minimum price was a key driver of the drastic decline in British coal power production in 2016. If Europe would like to prevent even a small change in the price of coal from creating a jump in emissions, then legislators should further reform the ETS and couple it with national minimum prices for greenhouse gas emissions”, Graichen recommends.

“The energy transition in the European power sector slowed slightly in 2016: electricity consumption has stopped falling now that economic growth has picked up, and investment into new solar and biomass seems to have slowed. But, encouragingly, emissions still fell significantly, due to a switch from coal to gas. Further switching is possible, but only if more coal plants close, the carbon price significantly rises, or gas prices fall back down again”, summarizes Dave Jones, analyst at Sandbag.

The study additionally details the progress that EU countries have achieved in expanding renewables and improving energy efficiency, two areas with binding national targets for 2020. Some reductions in electricity consumption have been achieved since 2010 in Sweden, Italy, the UK, Denmark, France and Portugal. By contrast, electricity consumption has increased inter alia in Poland and Bulgaria.

The EU-wide share of renewables in power generation rose 10 percentage points in 2010–2016, reaching 29.6 percent. “This is a major achievement in the EU energy policy of the last decade,” says Graichen. “The EU should build upon this success in the period after 2020 by working now to create regulatory conditions that drive further growth. However, the EU Commission’s ‘Clean Energy for All Europeans’ package does not do enough in this regard.”

Denmark, Lithuania, the UK, Italy and Germany have dramatically increased their share of electricity from renewables. Latvia, Hungary, Luxembourg, the Netherlands and Malta ranked last in green power development. The study, which presents these and many other facts and figures, is available for download free of charge at www.agora-energiewende.org and at http://www.sandbag.org.uk. 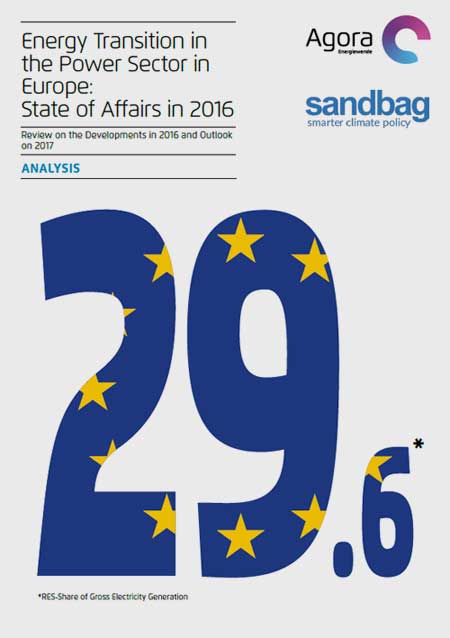