Asia and America are quickly embracing low-cost and clean solar power, whilethe European Union needs to adapt its policy frameworks to get ready for the nextsolar growth wave.

Michael Schmela, Executive Advisor and Head of Market Intelligence at SolarPower Europe, stated, “Once a solar leader, the European Union is in danger of being eclipsed by Asian powerhouses, such as China, in both solar power production and installations. Even the US, with a much smaller population than the EU’s 28 member countries combined, added about twice as much solar power capacities in 2016.”

James Watson, CEO at SolarPower Europe stated, “2016 will be remembered as the year that the first solar power purchase agreements were signed at levels that have made solar the lowest-cost power in many regions of the world. With clean solar being cheaper than inflexible generation technologies in much of Europe today, there is the need to drive the next solar investment cycle so we can pursue the decarbonisation of the European power sector. This requires the right policy framework. The Clean Energy Package recently presented by the European Commission provides very concrete and actionable levers, though there is still room for improvement.”

SolarPower Europe asks the European Parliament and Member States to take into consideration the following 5 top priorities to unleash growth for cheap and clean solar power in Europe when negotiating the Clean Energy Package:

Alexandre Roesch, Policy Director at SolarPower Europe says, “After having inspired somany regions in the world, Europe needs to find its own inspiration again and act as theleader of the energy transition. We need to build a major industrial project around solarand renewables. To start with, increasing the 2030 renewable energy target to at least35% will send a strong signal that Europe is back in the solar business”.

These solar market data are a first estimate from SolarPower Europe for 2016 solar power ongridinstallations that are based on official data from government agencies whenever possible. Ifsuch information was not available from primary sources, SolarPower Europe has gathered datamostly through its members, comprising national solar associations and corporations, as well aswith help from international association members of the Global Solar Council in America, Africaand Asia Pacific.

An update for the 2016 solar market numbers will be released in the SolarPower EuropeMarket
Report 2016 during the SolarPower Summit on 7-8 March 2017 in Brussels. A 5-year solardemand forecast until 2021 will be published in SolarPower Europe’s ‘Global Market Outlook ForSolar Power 2016 – 2021’ with the support of the Global Solar Council, which will be launched atthe Intersolar Europe trade fair in Munich on 30 May 2017. 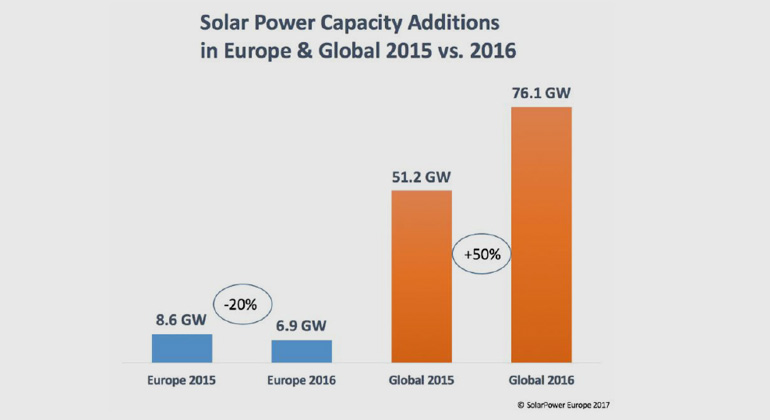