On the background of a new demonstration of global change with the hottest year on record took place in 2015 the UN Climate Conference COP21 of Paris. It had an extraordinary political importance with the personal attendance of all the world countries’ Heads of States.

Another initiative linked to the growing pollution in cities such as Beijing and Delhi and their problems in getting control of their energy, water, and transport problems was the launch of India’s 100 Smart Cities Project. It came on top of a new Global Alliance for Buildings that emerged at the COP21 as well.

At the final bargaining of the COP21 Treaty, it is regrettable that politicians could not manage to include the mention “RENEWABLES” in the final text. But implicitly those got a big boost in the new COP21 of Paris: without promotion of clean Renewable Energies and phasing out of the dirty fossil ones the agreed target to limit eventually the global temperature rise to 2° or less is an illusion. But the Renewables looked already over the shoulders of the negotiators in Paris! More than ever before stood the year 2015 for the new dominance of Renewable Energy in the global power markets: more Solar Photovoltaics (PV), Wind, and other Renewable Power capacities were installed last year than any conventional type of fossil or nuclear. Wind Power worldwide climbed to 435 GW with 64 GW of new capacity added in 2015. Another striking example is PV that attracted over $100 billion of new investment last year for a power capacity installation of some 50 GW. Total world capacity of PV stood end of 2015 at 230 GW of which 190 GW have been installed in the last five years only. By 2020 over 500 GW of PV will most likely have been installed worldwide, accounting for 10% of the over all power mix. That’s what is called an industrial revolution!

The Renewables are beating the established power stronghold of fossil and nuclear sources on its own playing field: money, economic competition. The cost of solar power came down dramatically by two effects, mass production of PV modules and low lending rate of capital – the Euribor went last year down to close to 0%. And PV mass production is accelerating: in 2015 for the first time 4 PV module producers had manufacturing capabilities of 4 GW each.

The conventional energies, on the other hand, had and have nothing to laugh about. The sudden emergence of the Renewables took them by surprise. This is a titanic battle as trillions of dollars are at stake. Crashing oil prices ruined most of the fracking projects, challenged the economies of oil and natural gas exporting nations, and forced the embattled oil majors to cancel new drilling projects. It does not help that the power sector has still its defenders of coal and nuclear. Be it that at the occasion of the COP21 many supporting scientists and politicians came out with their conviction that nuclear is good to combat climate change. And Russia agreed at the time of COP21 with Egypt to build a new atomic power plant there. But investors are now increasingly shying away from the financial risk in coal and all the fossil energies that are condemned in the long run. And it became known among investors that modern nuclear technology like the one projected at Hinkley Point in the UK is excessively expensive. Banks, pension funds, etc. are now divesting out of the conventional energies and turn their attention to the Renewables instead.

All this development could not leave untouched the conventional electric utilities as their business of operating large centralized power stations is not well fit to care for decentralized small renewable power plants. As a result, EdF, the world’s largest utility and big promoter of nuclear announced to be in financial difficulties, GdF Suez, the word’s second biggest wrote off most of its fossil fuel power plants and decided to switch its activities to the Renewables. Correspondingly it even changed name. In Germany the situation with the conventional utilities is not any better than it is in France.

Leaving alone some unproductive trade restrictions imposed by the EU and the US the global market prices of solar PV modules lie currently at approximately half a $ per Watt. Modules made of crystalline silicon cells have traditionally the upper hand. But up to 15% of the global markets favour those of the Thin-Film cells employing CdTe, CIS, or other material. The latter are hardly any more expensive than the silicon ones and might in the future enlarge their market share.

PV dissemination around the world is not yet very equal. Nowadays world PV markets are dominated by China, Japan, the US, the EU, and a few others. At the occasion of the COP21 the President of India, Narendra Modi launched a new Global Solar Alliance. This move highlighted the evidence that it is high time for the Indian subcontinent to catch up with the rest of the world in terms of PV market implementation. Even an African Solar Alliance found entry into the COP21 Treaty.

Actual system prices depend on local conditions and are not globally the same like those of the PV modules. In Germany for instance a ground mounted PV installation cost usually less than 1 $ per Watt; a kit for residential use can be found for 1 $ per Watt + installation cost. There is an experienced profession of installers available for making those costs reasonably low as well. Keeping in mind low capital cost, kWh costs of 8 cents without any subsidy are achieved in Germany. In more sunny climates as in Southern Spain the same system can deliver electricity at 5 cents per kWh.

In the US, Japan and other countries, PV system prices come a lot higher. In Japan domestic PV costs some $2.8/Watt and ground mounted $1.7/Watt. Relatively generous FITs are applied by the Government to improve competitiveness. The US counts median PV system prices of $4/Watt when building applied and $3/Watt for large-size ground-mounted ones. A lot of incentives and subsidies come in to smoothen these costs that are inflated by high BOS and administrative costs. Nevertheless, PV has achieved grid parity in 20 States in the US. The US’ traditional enthusiasm for PV is helped by the federal Investment Tax Credits ITC that were extended in December 2015 by the Congress for another 5 years. It is interesting to note that ITC favours auto-consumption as they apply to homes and other buildings. One should also mention on the State level Net Metering and RPS and on the community level some more incentives. YIELDCOs are a most successful tool to collect finance for PV on the Stock market.

In all this is China the Middle Kingdom: China doubled its coal consumption in the last 10 years so that it employs almost as much of it as the whole rest of the world. But from now on consumption is supposed to become flattening. On the other end is China by far the world leader in the production and installation of the Renewables of all types: PV, Wind Power, Hydro-power, Biomass, etc.

The future will bring a lot more of the same: thriving in the longer run towards a 100% Renewable Energy World. It is a grass-root movement with strong support from Communities and cities worldwide, from industry and investors. 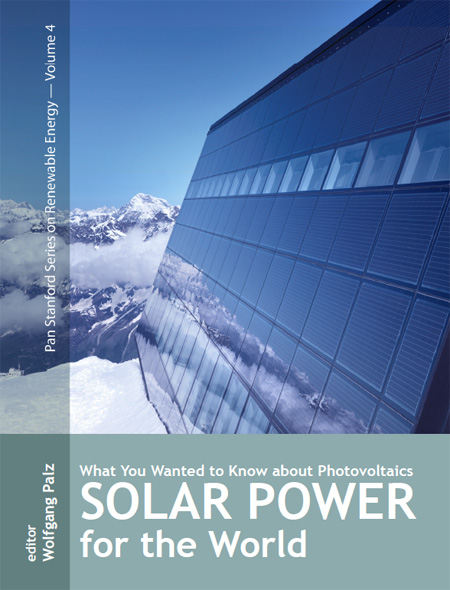