How much energy is produced within the European Union (EU) and how much is imported from third countries? In which Member States are electricity and gas the cheapest? How does the energy mix in my country compared with other Member States? What is the share of renewables in energy consumption and how efficient is the consumption of energy in the EU? What is the share of diesel passenger cars in the EU and what is the modal split of both passenger and freight transport? Does my country have fewer road accidents? How is the EU progressing in reducing its greenhouse gas emissions? Is my country well ranked in terms of resource productivity? How many tonnes of waste are generated and recycled every year per inhabitant? And what about the development of biodiversity over recent years?

The answers to these questions and many more are found in the 2016 edition of the Energy, transport and environment indicators statistical book, published today by Eurostat, the statistical office of the European Union. The objective of this publication is to provide an overview of the most relevant indicators on energy, transport and environment. It presents data for the European Union, for the EU Member States as well as for the candidate countries and EFTA countries.

A multi-thematic statistical book
The publication opens with a general data chapter which offers a first macroscopic overview of the main characteristics of the EU and its position with regard to the main economies worldwide.
In the Energy chapter, indicators presented include supply, final consumption, renewable sources, energy dependency, energy efficiency, and energy prices. Some interesting figures from this part show notably that:
Transport indicators cover infrastructure, equipment, freight and passenger transport, accidents and transport-related emissions for the different modes of transport. From this section, readers will learn for example that:

Finally, the Environment chapter includes indicators on climate change and greenhouse gas emissions, waste generation and treatment, water resources, abstraction and use, wastewater treatment, forestry and biodiversity, chemicals, material flow accounts and economic indicators on environmental protection expenditure, the environmental goods and services sector and environmental taxes. Did you know for instance that: 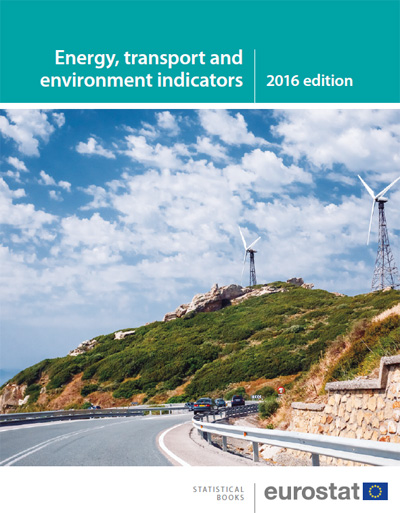