When asked to cite “the most important problems facing this country that government should address,” 13% of respondents cite electricity as one of their top three priorities. This places electricity at No. 11 on the list of problems, far behind unemployment (38%) and health (32%) but ahead of corruption, housing, and political violence.

In some countries, however, electricity stands out as a top priority, including Guinea (where 33% cite it as one of the three most important problems), Nigeria (32%), Ghana (31%), and Benin (28%) . Along with Lesotho (23%) and São Tomé and Principe (21%), these countries place electricity supply among their five most frequently cited problems. Similarly, on a question about priorities for increased government spending, citizens in Lesotho (36%), Nigeria (28%), Benin (25%), Ghana (25%), South Africa (24%), and Guinea (23%) are most likely to rate electricity as their first or second choice.

Afrobarometer data describe “lived poverty” based on how often people go without basic necessities: enough food, enough clean water, needed medicines or medical care, enough fuel for cooking, and a cash income. The frequency of going without enough to eat is a particularly good proxy for overall household experience of poverty. In a household without electricity, members are significantly more likely to go without enough food. For example, where an electric grid is available, 37% went without enough food at least once during the previous year; where no grid is present, the proportion who experienced hunger rises to 60% (see infographic right). Comparable patterns hold for the relationship of other basic services to hunger (Mitullah, Samson, Wambua, & Balongo, 2016).

Further research may clarify whether having electricity reduces lived poverty or poverty reduces the ability to obtain reliable electricity – or whether the two operate in a selfreinforcing vicious circle. But for infrastructure planners, the message is clear that the poor should be a priority target for provision of electricity. 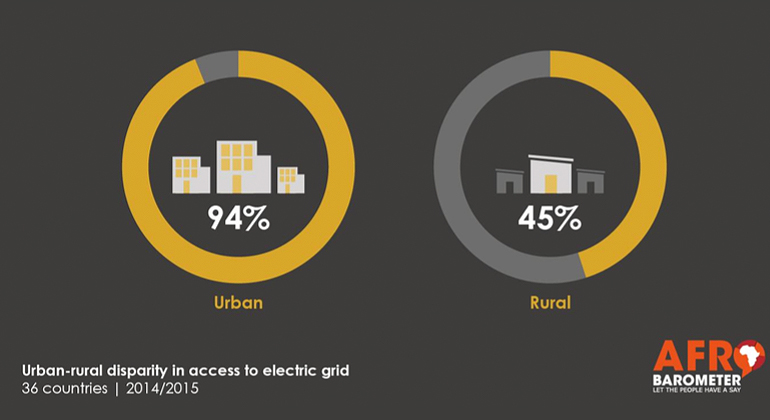