“Solar installations are forecasted to grow year-over-year globally despite recent headwinds in the sector with solar stocks, yieldcos, bankruptcies and the negative perception surrounding solar public companies. Solar has grown from just 2.6 GW in 2007 to a forecasted 66.7 GW in 2016 showing impressive resiliency along the way as it becomes one of the fastest growing new generation sources around the world,” commented Raj Prabhu, CEO and Co-Founder of Mercom Capital Group.

China installed 15.1 GW of solar in 2015, retaining its top spot as the largest solar installer in the world. Mercom forecasts China to install 18.5 GW in 2016. The additional 5.3 GW installation quota combined with the expected rush to meet FiT deadlines in the first half of the year should help China exceed 2015 installation numbers. China’s Q1 2016 installation figures of 7.14 GW confirm that it is off to a fast start. China recently reduced the FiT by up to 11 percent based on regions. To address the subsidy payment issues and raise additional revenue, the renewable energy surcharge has been increased by 27 percent, and an on-grid power tariff for commercial and industrial customers has been reduced to tackle shortages in the renewable energy fund. To address curtailment issues, the government has proposed a policy of guaranteed purchase of renewable power which it plans to implement gradually.

The unexpected extension of the U.S. Investment Tax Credit (ITC) in December last year has completely changed the dynamics of the U.S. solar market. Mercom forecasts a conservative 13.5 GW of solar installations in 2016 as vendors are indicating a slower first quarter – at least in terms of new projects – as developers are taking their time to line up suppliers and negotiate contracts. This of course may change in the second half of the year.

Japan is expected to install around 10.5 GW of solar this year. Its current solar installation goal is 28 GW by 2020. Japan cut the feed-in tariff in March of 2016 by 11 percent. While the country started off with an overly generous FiT in 2012 of ¥42 (~$0.387)/kWh, it is now down to ¥24 (~$0.221)/kWh. Japan continues to struggle with grid connection, curtailment issues, and an undeveloped pipeline. Of the approved pipeline, only about 15 percent has been installed. Japan is also looking to implement solar auctions in order to cut subsidy costs.

India is expected to install over 4 GW in 2016 which will bring it to the fourth spot globally. India currently has a pipeline of over 21 GW under development and in pending auctions as the country targets its installation goal of 100 GW by 2022. Aggressive bidding in its recent auctions has caused some concerns to the viability of these projects due to unrealistic low bids. The latest India update can be found here.

The top three solar markets in Europe are again expected to be the U.K., Germany and France.

Proliferation of solar auctions around the world is an important development over the last 12 months with subsidy costs from solar becoming an issue in many countries. Germany completed three auctions in 2015, the U.K. and Japan are looking at a similar model, France is conducting solar auctions, and China is also contemplating auctions. India and South African solar policies are primarily based on auctions while Brazil and Mexico are also largely auction-based. 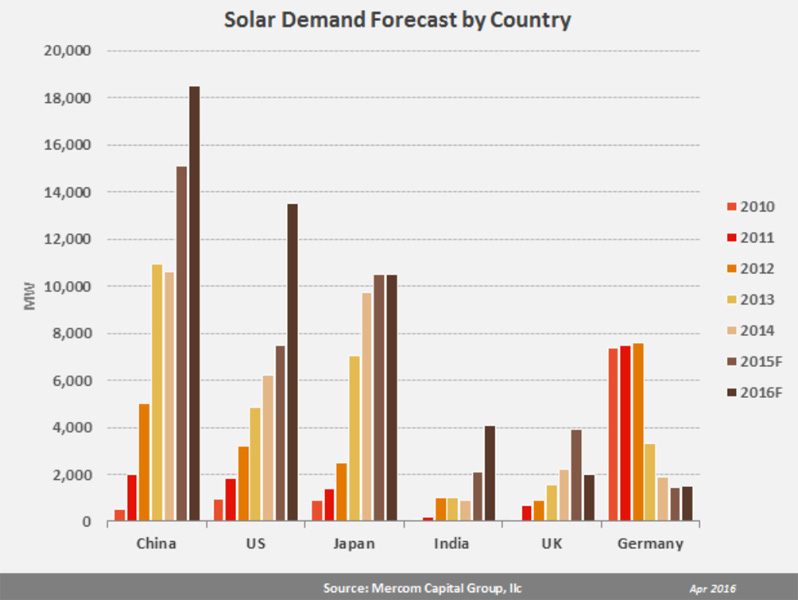