Beatrice Marpe is a women’s leader in the remote village of Tokoishi, about 100 kilometers south of Kenya’s capital, Nairobi. The job of a Maasai women’s leader is usually to help solve marital issues, but Marpe, 55, has taken on a new role: solar ambassador.

Being a solar power advocate is about more than renewable energy for Marpe; it’s personal. Her husband died 11 years ago after being killed by leopards in the night while he guarded their livestock.

In the past, the men of the village used bonfires, spotlights and kerosene lamps to keep predators away from their cattle at night. Now, solar lights have been introduced to the village to ensure the wild animals stay away without anyone having to stay outside to deter them.

Samuel Njoroge, the SunTransfer manager in the region, says the company offers customers a pay-as-you-go financing model that allows families to purchase a solar energy system via an installment credit. With the money saved that would have been spent on kerosene lamps, the credit can be paid off within three years.

When SunTransfer approached Marpe with its solar power idea in July 2014, she agreed to try it, and found that it worked.

Now when other women visit Marpe’s home, she explains how solar energy works and encourages them to take it up too. Once women are interested, they convince men to agree to the idea.

“This has been working very well, and the men are now getting more involved,” Marpe says.

“Solar energy comes with a lot of benefits apart from the light that scares away the wild animals,” Njoroge says. “Compared with kerosene and firewood, the cost is low. [People] are also able to watch TV, something that is rare in this area.”

In neighboring Tanzania, Loise Loseku, who lives in Enguik village, is taking things a step further: She’s installing solar panels herself, a task that would traditionally be seen as men’s work. The 29-year-old mother of six has been doing this work for six years.

Loseku is part of the Maasai Stoves and Solar Project, which has introduced solar power and clean-burning cookstoves to the community. Women are trained to distribute and install the panels and stoves in their manyatta (traditional mud houses). In a week, Loseku can serve four homes, sometimes more. Customers pay $11 for each installation, a subsidized rate under the program; the actual cost is $52.

Robert Lange, a retired physics professor from Brandeis University, founded the project in Tanzania to promote the use of clean energy in rural, remote villages.

Smoke from open fire and traditional cookstoves poses a serious threat to health, particularly for women and children. The World Health Organization has found that, worldwide, more than 4 million people die prematurely from illnesses attributable to household air pollution.

Local women play a significant role in running the program and help guide its direction on the ground. “We chose to use women because after conducting a few workshops in the villages, we realized that women were more willing and open to the idea than men,” Lange says.

In each village, the women work in groups of five to 10. They are selected for the roles by the other women in the community, who assemble to meet with the officials from the Maasai Stoves and Solar Project, then select who should be in the installation group, based on leadership skills.

“We meet every month with project officials and women groups from other villages to share ideas and discuss the way forward,” Loseku says.

“Within these working groups, the women elect their own leaders, who manage them and organize their daily work. The women are trained in approximately 10 days to install the stoves and solar panels,” Kisioki Moitiko, the project manager in Tanzania, says.

Loseku says the program allows her to earn extra money for her family, as well as helping her community.

“People now come to us inquiring about solar because they have seen it work well at their neighbor’s home.”

This story was supported by an International Women’s Media Foundation (IWMF) reporting grant. 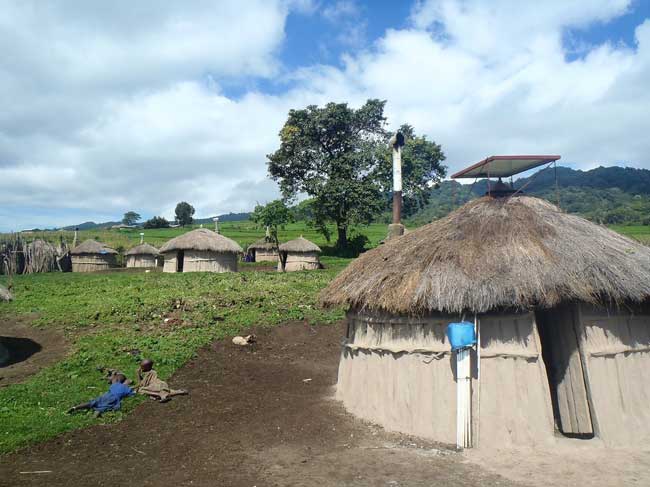