The upstream assets of the world’s seven largest privately owned listed oil and gas companies could collectively be worth $100 billion more if they aligned their investment plans with the 2˚C target, a new study released by the Carbon Tracker Initiative shows.

It finds that pursuing a business as usual growth model will only make more financial sense than a smaller, lower cost 2˚ C project portfolio if oil prices exceed $120 per barrel for a significant period of time.

The report further warns that projects that rely on high oil prices are more risky and once a ‘fossil fuel risk premium’ is added prices would need to reach unprecedented levels of $180 per barrel – more than double OPEC’s long-term average assumption of $80 a barrel — for the BAU case to be more attractive.

The think-tank’s Carbon Sensitivity analysis is believed to be the first independent 2˚C stress test published of upstream spending on new oil and gas projects.

Shareholders have filed resolutions asking for ExxonMobil, Chevron and other US energy companies to undertake stress tests to ensure they maximise value and don’t just pursue a BAU strategy in the face of stronger regulation and weakening fossil fuel demand as economies transition. The boards of Royal Dutch Shell and BP decided to support similar resolutions last year that were carried by strong shareholder majorities. The international Financial Stability Board has set up a task force on climate that has just consulted on how this kind of sensitivity analysis could reduce climate risk.

The carbon sensitivity analysis compares the BAU value of the oil majors’ combined upstream portfolio with the value of a portfolio of only those lower projects needed to satisfy demand in a 2˚C world.

“In a 2˚C world, the major oil and gas companies will need to manage declining demand for oil. However, this can still prove to be a value-add proposition if they simply avoid developing high cost, high carbon projects,” said Mark Fulton, adviser to Carbon Tracker and co-author of the report.

This risk premium represents the greater risk associated with pursuing high cost growth projects, compared to a lower cost portfolio that would satisfy 2˚C demand. The resulting higher discount rate only strengthens the case that a 2°C portfolio can be worth more to investors today, unless future oil prices rise to very high levels on a sustained basis.

“Oil majors have had phases of prioritising value over volume in the past, but that has to become permanent, as the risk premium for pursuing high cost projects is increasing,” said Paul Spedding, former global head of oil and gas research at HSBC and adviser to Carbon Tracker.

OPEC’s outlook averages around $80 a barrel to as far off as 2040, while the IEA’s 450 scenario has oil prices averaging less than $100 a barrel to 2040 – well below the levels needed to justify a BAU strategy. Shareholder resolutions have been asking for stress tests against the IEA scenarios. This analysis shows that a 2°C path can be good news for investors if company management make the right decisions.

“Prudent capital expenditure can have a positive outcome for shareholder value – executives can deliver the best results for investors by running their companies as if preparing for a lower demand world, whether they personally believe it likely or not,” said Andrew Grant, financial analyst at Carbon Tracker.

The report argues that it is wise for oil majors to make conservative assumptions about future demand, noting that that a small amount of oversupply – roughly 2% – led to the current era of price volatility and $380 billion of capital expenditure cancelled or deferred by the industry between late 2014 and the end of 2015. A significant portion of this is known to have been high-cost production.

Methodology: Carbon Tracker analysed the combined upstream project portfolios of the seven oil and gas majors. It compared the Net Present Value of their business as usual project pipeline with the NPV of only the lower cost projects needed to satisfy demand in the International Energy Agency’s 450 scenario for a 2˚C world. It conducted a sensitivity analysis with a range of oil prices up to $180 a barrel using a 10% discount rate and applying a further FFRP of 0.5% to the BAU portfolio to represent its greater volatility. 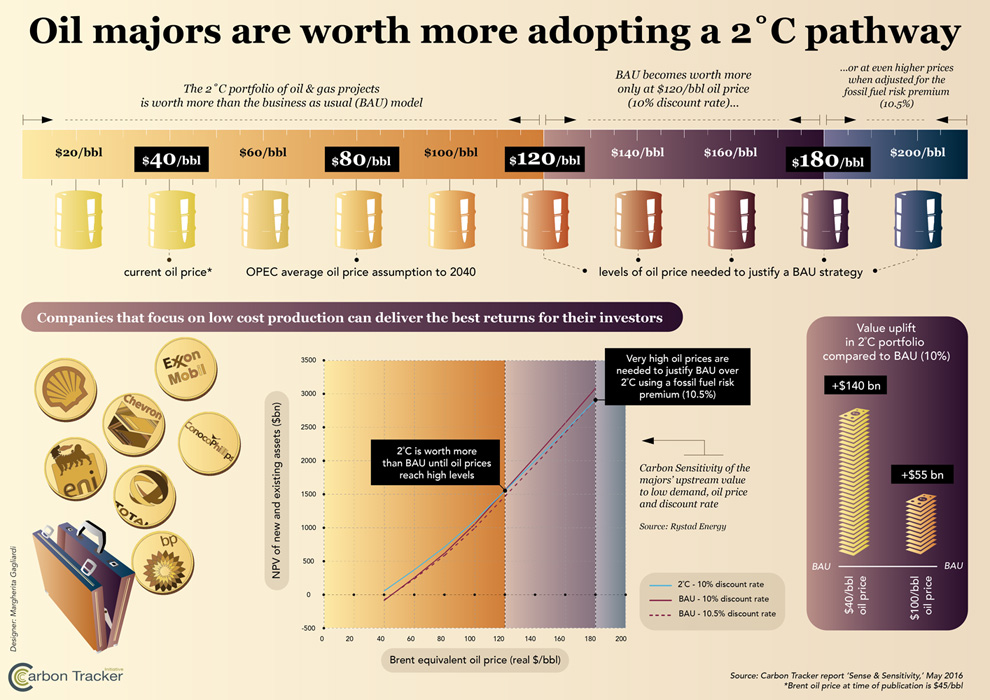