Roland Berger study: Low oil price diminishes the profitability of renewable energies compared to fossil fuels – but the situation will not last.

The current low price of oil makes renewable energies look less profitable when compared with fossil fuels. There is a risk that the EU’s and Germany’s energy and climate policy goals could be thrown off track, especially if this short-term trend leads to the wrong conclusions: For one thing, the current situation does nothing to change the fundamental scarcity of fossil fuels and for another, renewable energies and in particular onshore wind power are already charting a course to success, which it would be unadvisable to interrupt. Governments are called upon to invest primarily in the expansion of the power grid. But operators, too, need to act. As the experts from Roland Berger found in their new study, “Onshore wind power – Playing the game by new rules in a mature market”, wind farm operators in Germany alone could boost their profits by more than EUR 300 million per year. One of the study’s findings was that operating costs harbor average savings potential of 45 percent.

“Power generation capacities stemming from wind power have jumped by a factor of fifty worldwide over the past 20 years,” said Torsten Henzelmann, Partner at Roland Berger. “And online wind power in particular is now competitive in many European markets.” Costs came down by one third between 2010 and 2014, and at good locations onshore wind power is cheaper than power from coal-fired or nuclear power plants, even without subsidies. “This is a positive trend that can and must continue. If we view it in the context of the recent collapse in the oil price, it is clear that operators and policymakers alike must act now,” advised the expert. Even though the oil price slump is, in the short term, depressing the profitability of renewable energies as against the money that can be made from fossil fuels and as such is only bolstering critics in their beliefs, it would be wrong to make any rash decisions solely on this basis, warns Henzelmann: “Yes, oil is cheap, but fundamentally, fossil fuels are just as scarce as they ever were. Energy policy needs to take a long-range perspective. The price of a barrel of oil is going to go up again at some point. That is why wind power remains a vital source of our future power supplies.”

Grid expansion is a key requirement
The Roland Berger experts see a need for action from policymakers and the public sector. They shine a spotlight on the inadequate grid infrastructure, which is not only putting the EU’s ambitious climate targets at risk but also jeopardizing the security of our power supplies. “Climate protection and energy security are two sides of the same coin,” commented Henzelmann. “In order for both of them to be guaranteed, European nations need to invest more money in their grid infrastructure. Otherwise such a significant source of energy as online wind farms will never really come into its own.”

Countries’ latest investment plans testify to the fact that onshore wind power is destined to take on an increasingly important role: 13 percent of Europe’s electricity is expected to be generated through onshore wind farms by 2030; the figure in 2012 was just 6 percent. A doubling of wind power generation in Germany is also anticipated by 2030. That said, we are already seeing serious bottlenecks in the current power grid. New transmission capacity is urgently needed for wind power in particular to help even out the peaks and troughs of power generation. “The UK alone would need to almost triple its transmission capacity by 2030 and the Iberian peninsula would need to see its capacity rise tenfold,” explained Henzelmann. “EUR 150 billion in investment will be needed across the EU in the medium term.”

The EU also needs to pour more money into smart power grids. Smart grids are what enable improvements in power efficiency through the exchange of data between power generators and consumers. China and the US are among the foremost nations to be investing double or triple the EU’s contributions in this area, and South Korea is spending EUR 600 million a year on research into smart grids alone, more than the whole of the EU put together, where spending amounts to EUR 400 million. “Future investors in onshore wind power will make their decisions dependent on an adequate grid infrastructure,” warned Henzelmann. “So Europe needs to catch up quick if it doesn’t want to miss the boat.”

Wind farms could be more efficient
Policymakers are not the only ones being called upon to act: onshore wind farm operators also need to take action. In times of falling subsidies, wind farms need to become more efficient to stay competitive. And the potential for improvement is considerable: Germany’s 477 onshore wind farms alone could boost their profits by more than EUR 300 million. Operating costs are one particular area where onshore wind farms could save 45 percent on average, according to calculations by the Roland Berger experts. There are six main cost levers that operators should apply: first in line are maintenance costs as the biggest single cost block, but then the costs of land leasing, repairs, insurance, project management and capital could all also be dramatically reduced.

“Our study demonstrates an overall positive trend in the industry’s level of professionalism,” said Roland Berger Partner Torsten Henzelmann. “This will serve to make wind power even more competitive and help the industry expand its role as an indispensable part of our energy supply infrastructure.” 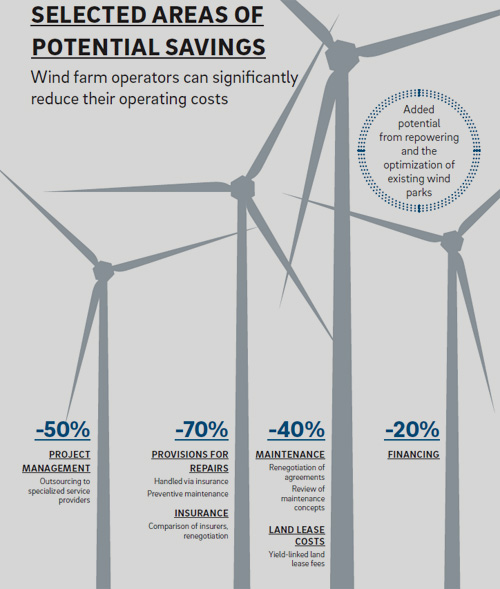