A study has divided the world into 12 climate zones on the basis of the Köppen–Geiger classification map. The paper confirmed Chile’s Atacama region has the world’s highest solar radiation but also showed the region with the highest performance ratio for PV systems was near Moscow.

A research team from Slovenia’s University of Ljubljana has proposed a new methodology for global climate classification whose primary aim is to evaluate solar project performance.

The Köppen-Geiger-Photovoltaic (KGPV) map is said to be the first global climate classification scheme used to analyse the long-term performance and reliability of PV modules and to compensate for a lack of standardization in climate zones. “The usefulness of the KGPV scheme can be proved by comparing the climate zones with relevant PV indicators such as the energy yield, performance ratio or module operating temperature,” the researchers wrote.

The 12 climate zones and four PV indicators examined by the Ljubljana team – solar irradiance, weather data, local conditions and PV panel data – are projected towards the year 2100 under the climate change projections derived from the “SSP5-8.5” climate change scenario created by the Institut Pierre Simon Laplace, a group of nine laboratories conducting research into climate science.

The scientists claim that although data for temperature and precipitation are already available, thanks to thousands of ground-based measurements integrated into large datasets, similar collections of data points for solar radiation either do not exist or are limited to the northern hemisphere, where most ground stations are located. To fill the gap, the researchers adopted global horizontal irradiation data from the reanalysis-based ERA-Interim dataset provided by the European Center for Medium-range Weather Forecasts.

A KGPV map was generated using those datasets and divided into five climate zones: A-Tropical, B-Desert, C-Steppe, D-Temperate, E-Cold and F-Polar. The zones were then subdivided into Low (L), Medium (M), High (H) and Very High (K) irradiation zones. In order to simplify the findings, the resulting 24 areas were then halved using a population density and land-surface ratio.

“The uncertainty of the model largely depends on the quality of the input data and can deviate largely from the acceptable values in specific locations like high mountains and coastal regions,” the research team stated. “However, the developed model, together with the used irradiation database, proves to be a reliable tool for PV performance modelling.”

The study confirmed the world’s best PV location is Chile’s Atacama desert but also showed the region with the best performance ratio was near Moscow, in Russia. 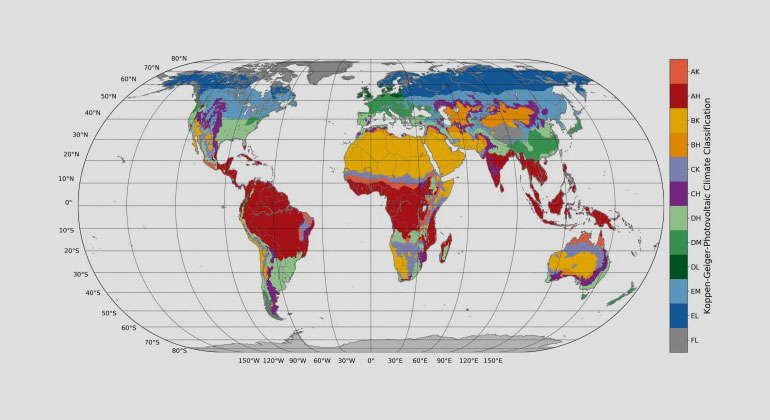