They have found that these cooperatives have developed a significant capacity to survive and adapt in response to the hostile context brought about by the economic and political regime. And even though interest in these cooperatives is on the increase, they still have limited weight within the Spanish energy system.

The transition from fossil to renewable energy sources is a necessary condition for the sustainability of human societies. There are movements in societies seeking to make this transition “not merely technological but also designed to exploit the capacity for social transformation they offer, given the possibility of their modular use and capacity for producing energy on a local level”, said Álvaro Campos-Celador, researcher in the Department of Thermal Engines and Machines of the UPV/EHU’s Faculty of Engineering – Bilbao and author of the study, together with Jon Terés-Zubiaga of the same department, and Iñigo Capellán-Pérez of the University of Valladolid.

Renewable energy cooperatives are good candidates for this; they are made up of groups of citizens and undertake to generate and market renewable energy. “Models of this type could replace the current energy model, which is virtually in the hands of five major companies, and make it more democratic, non-profit making, and one in which citizens can play an active role in energy, which is something so important and central to their lives,” pointed out Jon Terés.

Yet “renewable energies are not enjoying the best of times; even though they have had very strong institutional support since 2004, a series of regulatory changes took place around 2011 and almost completely hampered the possibility of implementing renewables in an economically viable way, and led to the bankruptcy of enterprises and small investors”, explained Campos.

The researcher describes the reasons that led to this change as complex. “Before the economic crisis, forecasts had been made indicating that consumption was expected to rise in the population and investments were made in all kinds of power stations, both renewable ones and ones based on fossil fuels. What happened is that from 2008 onwards consumption not only failed to continue to rise, it began to decrease, so many investments ended up jeopardised, above all in the free-market scenario,” explained Campos.

In the study they analysed, in that situation, the ownership of the various sources of energy existing across Spain. “Over 90% of the ownership and production of fossil energies corresponds to the major electricity companies that enjoy, let us say, excellent relations with that various governments there have been, and yet renewable energies correspond more to other investors,” specified the researcher. This conflict could have been responsible for what happened”.

What is more, during the same period “a story appeared in the press saying that renewables were expensive and were making the price of electricity higher and that we were all paying for this. When examining the references of the people who were evaluating this phenomenon, we saw that it was possible to demonstrate the opposite, in other words, that renewables were in fact cutting the price of electricity,” he said.

Faced with all this hostility, “the cooperatives found themselves forced to adapt to the new context and have managed to forge ahead with new projects by means of innovative funding methods,” reasoned Terés. For example, the initiative “Recupera el Sol” (Recover the Sun) aims, by means of small contributions by citizens, to “socialize” photovoltaic plants, which many owners have found themselves forced to renounce because they could not secure a return that was sufficient to offset the financial costs of their investment.

Right now, the number of contracts that the cooperatives have across Spain as a whole exceeds 70,000. “Although this does not account for more than 0.3% of all the electricity contracts in Spain, it is true that the number is growing significantly, and in particular over the last 3 to 4 years,” said Campos.

“I believe that the mission of the cooperatives right now is to demonstrate that renewable energy and this way of managing energy is viable, and even cheaper in terms of the price of electricity. There is no doubt that much remains to be done, but in actual fact there is a very strong potential. And a more favourable regulatory framework would undoubtedly encourage the expansion of renewables,” concluded Campos.

This study was conducted by three researchers: Iñigo Capellán-Pérez, member of the Research Group on Energy, Economy and System Dynamics of the University of Valladolid, and Álvaro Campos-Celador and Jon Terés-Zubiaga, both of whom are lecturers in the UPV/EHU’s Department of Thermal Engines and Machines. 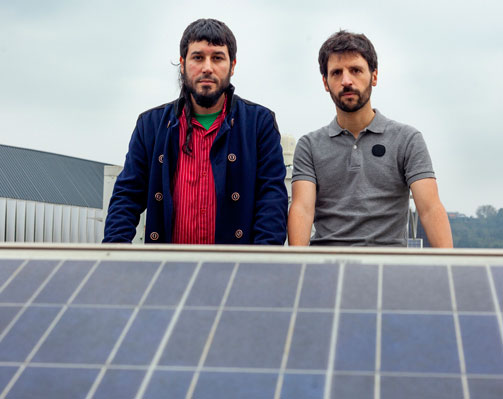 UPV/EHU-University of the Basque Country 2018