Around the world, more than a billion people still lack access to electricity. This number is shrinking, down by one third since 2000, despite rising population levels, according to an International Energy Agency (IEA) special report on energy access, published.

The report says that while coal has supplied nearly half of the progress from 2000 to date, its role is set to decline “dramatically”. This is because renewables are becoming cheaper and because the hardest-to-reach people are in remote, rural areas where off-grid solutions offer the lowest cost.

The report shows the number of people without access to electricity will shrink by another third by 2030, with 60% of these gains supplied by renewables. Furthermore, if the world commits to providing universal access by 2030, then renewables would bridge 90% of the remaining gap, the IEA says.

There have been spectacular gains in providing access to electricity this century, cutting the number without it from 1.7 billion in 2000 to 1.1 billion in 2016, the IEA says. Most of this progress has been in Asia, as the charts below show (blue, yellow and green lines and columns).

India has led the way, with 500 million gaining access to electricity. Sub-Saharan Africa now has the majority of people still without access, at 600 million, an increase over the past 15 years due to rising populations. Recently, this number peaked and started to fall (red line and columns).

The rate of progress has been accelerating, the IEA says, rising from 62 million people gaining electricity access each year during 2000-2012 to 103 million during 2012-2015.

Coal has been the main source of this new supply, generating 45% of the electricity used by people gaining access for the first time between 2000 and 2016 (purple pictograms in the chart, below).

There has also been a growing role for renewable sources of electricity, the IEA notes, with particularly rapid growth in decentralised off-grid access (dark green pictograms). From 2000-2012, renewables provided 28% of new access to electricity. This figure rose to 34% during 2012-2016.

There are regional differences in the sources of new electricity connections. In India, for example, coal generated 75% of new supplies, against 20% for renewables. (This pattern is expected to reverse, see below.)

Looking ahead, the IEA says the number of people without access to electricity will fall to around 700 million by 2030, under its central scenario.

Asia will reach close to 100% access to electricity by 2030 (lilac, yellow and green lines and columns, below) and India will meet its aim of universal access in the early 2020s (blue). The vast majority of the 700 million still without electricity in 2030 will be in sub-Saharan Africa.

Note that this chart reflects the IEA’s central “New Policies Scenario”. This includes existing policies plus announced policies and intentions. It also reflects assumptions about the costs of different technologies and the rates of population and electricity demand growth.

Coal’s role in providing electricity access “declines dramatically”, the IEA says, providing power to 16% of those who gain access over the next 14 years. This compares to 45% during 2000-2016. 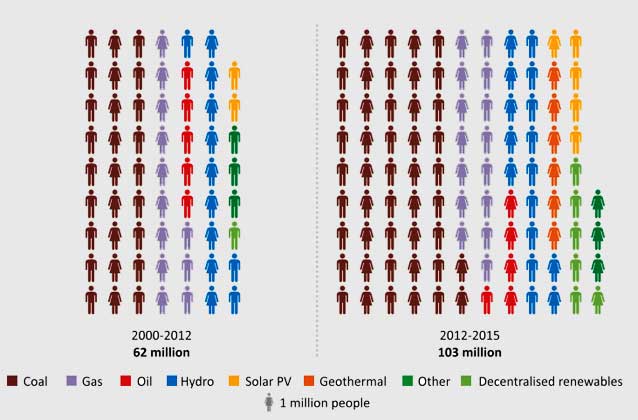