However, overall clean energy investment was steady in the first half of the year, thanks to a strong second quarter for wind power investment, led by the U.S. and China.

A mixed picture for global clean energy investment in 2018 is emerging, with dollar investment in solar under pressure while commitments to wind power and energy smart technologies such as electric vehicles and batteries are running above last year’s levels.

The latest authoritative figures from research company Bloomberg NEF (BNEF), show world investment in clean energy[1] in the first six months of 2018 at $138.2 billion, down just 1% from the same period in 2017. The second quarter, from April to June, actually saw a rise year-on-year – of 8% to $76.7 billion.

A sectoral split for the first half of 2018 shows solar investment down 19% compared to the same period last year at $71.6 billion, with wind up 33% at $57.2 billion. The slippage in solar reflects two main developments – significantly lower capital costs for photovoltaic projects, and therefore fewer dollars spent per megawatt installed; and a cooling-off in China’s solar boom. These trends are set to gather pace in the second half.

Justin Wu, head of Asia-Pacific at BNEF, said: “On June 1, the Chinese government released a policy document restricting new solar installations that require a national subsidy, with immediate effect. We expect this to lead to sharp drop in installations in China this year, compared to 2017’s spectacular record of 53GW.”

Pietro Radoia, senior solar analyst at BNEF, commented: “It will also mean overcapacity in solar manufacturing globally, and yet steeper price falls. Before the Chinese announcement our team was already expecting a 27% fall in PV module prices this year. Now we have revised that to a 34% drop, to an end-2018 global average of 24.4 U.S. cents per watt.”

In the first half of 2018, China invested $35.1 billion in solar, down 29% from 1H 2017. However, BNEF expects the full extent of the government-ordered cutback to become clear only from the second half of the year onwards. Its analysts see a possibility that that world solar installations in 2018 could fall for the first time on record. In 2017, they totaled 98GW, far more than for any other technology, renewable or non-renewable.

The jump in wind power investment in the first half of 2018 came thanks to a stream of large project financings from the U.S. to Taiwan and from India to the Netherlands and Norway. The headline deals included $1.5 billion for the 731.5MW Borssele 3 and 4 offshore wind farm in Dutch waters, $1 billion for the 478MW Hale County onshore wind project in Texas, and $627 million for the 120MW Formosa 1 Miaoli project (the first offshore wind array to be financed in the sea off Taiwan).

Wind was not the only strong sector in clean energy in the first half of 2018. Equity-raising by specialist companies in energy smart technologies saw a 64% increase year-on-year, to $5.2 billion. The top deals in the second quarter were a $852.5 million initial public offering by Chinese lithium-ion battery maker Contemporary Amperex Technology, or CATL, and a $795 million Series B venture capital round by Chinese electric vehicle company Youxia Motors. Another Chinese EV specialist, Future Mobility Corporation, raised $500 million in a Series B round of its own.

The smaller sectors of clean energy – biomass and waste, small hydro, geothermal and biofuels – each saw investment in the $0.7-1.2 billion range in 1H 2018. All apart from biofuels were down compared to the same period of 2017.

The overall investment figure for clean energy globally of $138.2 billion in the first half of 2018 featured the following country-level performances: 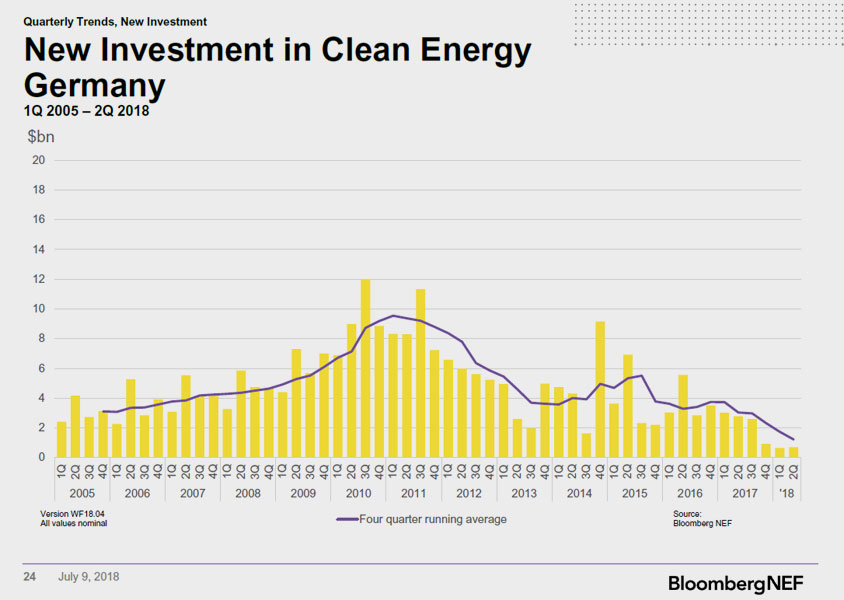