Among the most transformative events of the current decade has been the dramatic, and sustained, improvement in the competitiveness of renewable power generation technologies.

Support policies for solar and wind power technologies are driving a virtuous circle of technology improvements, falling costs and continued growth in new markets. In 2015, more renewable energy capacity was added to the global energy mix than in previous years, including 47GW of solar photovoltaic (PV) and 63GW of onshore wind.

This article originally appeared in Issue 5 2016 of our print magazine. The digital version of the full magazine can be read online or downloaded free of charge.

Solar PV module prices have fallen by 80% since the end of 2009 and are expected to fall even further in the near future. Countries around the world are realising that plummeting costs of solar PV equates to some of the cheapest electricity available, where good solar resources exist and financing costs are reasonable. The competiveness of solar PV is dramatically illustrated by the recent string of tender result announcements that have prices below $0.03 cents per kWh in Dubai, Chile and Abu Dhabi. Thanks to these recent developments, the promise of solar PV in the sunbelt is about to be realised, and this will have profound implications for Africa.

Africa has abundant solar resources (up to 117% higher than in Germany), but also has a desperate need for new capacity to improve existing supply quality and meet demand growth. The continent is increasingly turning to solar PV as an economic means to bolster energy security, meet social and development goals and support rapid economic growth in a sustainable manner. In 2014, new capacity additions of solar PV in Africa exceeded 800MW, more than doubling the continent’s cumulative installed PV capacity. This was followed by additions of 750MW in 2015 (refer to Figure 1). There is also a fast growing PV market to meet off-grid electricity needs. Technology improvements and lower costs have spurred local and social entrepreneurs in the solar home system (SHS) market and in developing stand-alone mini-grids.

Solar PV is a highly modular solution, both on-grid and off-grid, and can be deployed more rapidly than other generation options. Given the pressing need across Africa to boost electricity access and improve poor electricity supply, the ability to rapidly scale up solar PV is a significant advantage. Falling utility-scale costs will drive this growth – if the regulatory framework is up to the job.

The years 2015 and 2016 have been recorded as breakthrough years for solar PV in Africa. Many of the latest proposed utility-scale solar PV projects are targeting competitive installed cost levels that are comparable to today’s low-cost projects around the world. This is a very positive signal, given the nascent market for solar PV in Africa and the challenging business environment for infrastructure projects in many African countries.

South Africa, with its strong civil engineering sector and large renewable independent power producer (IPP) programme, which provides investor certainty, has the lowest installed cost (around $1.4/W for the best project) for an operating solar PV plant on the continent for the data available. Other countries are targeting cost structures in the range of $1.5 to $2.5/W in 2016. Given the challenges of doing business in some parts of Africa – and the fact that these will be either the first solar PV plants in a country, or one of just a handful – this cost range is competitive. Project announcements in 2016 that are targeting commissioning dates in 2018 (with perhaps some projects coming online in late 2017) are targeting a competitive total installed cost range of $1.2 to $1.9/W.

Off-grid utility-scale projects (> 1MW) are relatively uncommon, with little data available for Africa. However, there are off-grid projects in the 1MW to 5MW range that are targeting costs below $2/W for 2016 and beyond, which is relatively competitive for this scale in the African context. Mini-grids utilising solar PV are also becoming much more competitive, with stand-alone solar PV mini-grids having installed costs in Africa as low as $1.90/W for systems larger than 200 kilowatts.

With the rapidly improving competiveness of solar PV, the potential for very rapid solar PV growth in Africa is very real. However, ensuring that the right regulatory framework and institutional structures are in place will be an important pre-condition to this growth. Without these issues taken into account, project risk will be elevated and the higher cost of capital will seriously hinder project economics.

Efforts by development partners will therefore not only be essential from a capacity building perspective, but also potentially vital in using programmes to help de-risk solar PV projects (e.g. as is being done by the World Bank’s Scaling Solar project). If these efforts are successful, the dividend for Africa could be significant. IRENA’s REmap analysis – indicating a doubling of the share of renewable energy globally by 2030 – shows that Africa could be home to more than 70GW of solar PV capacity by 2030. This will yield low-cost electricity to power Africa’s future and provide access to the approximately 600 million Africans who still lack access to electricity today.

Now is the time for Africa to profit from its enormous solar potential, as it has never been more possible, and less expensive, for Africa to unlock the economic, social and environmental benefits of its solar resource. ESI

This article originally appeared in Issue 5 2016 of our print magazine. The digital version of the full magazine can be read online or downloaded free of charge. 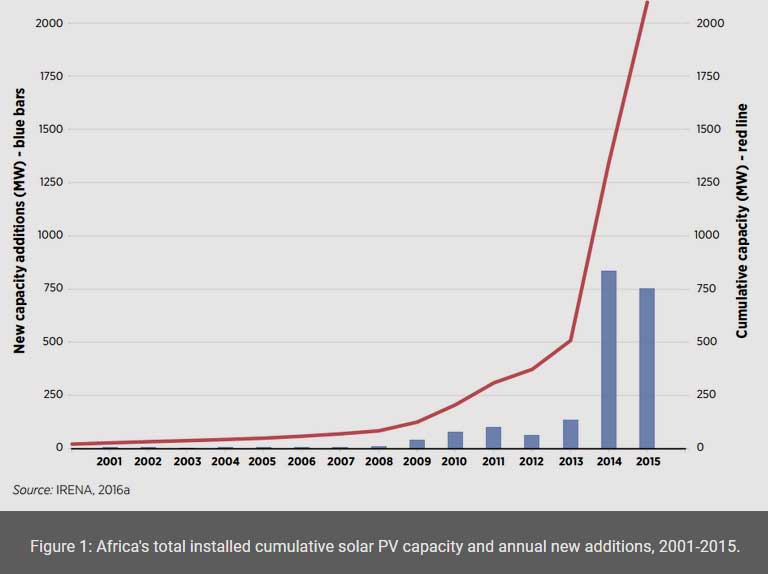 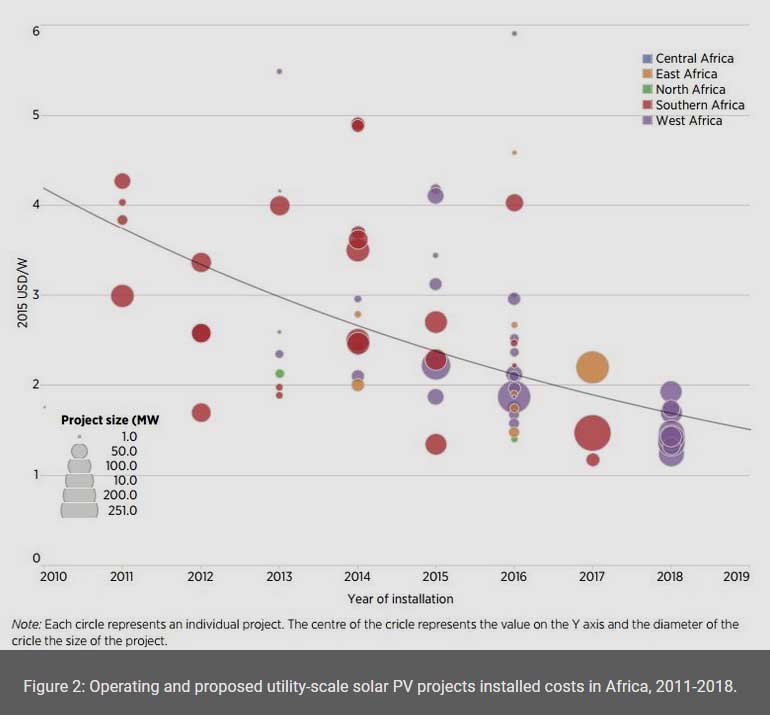 ESI AFRICA 2018 | Michael Taylor is the senior analyst leading IRENA’s analysis of renewable technologies costs and performance. He has 20 years’ experience as an energy economist in energy modelling, the economic analysis of energy sector issues and energy policy development.