The cost of PV modules and installations are a key factor in the discussion about possible dumping of Chinese module manufacturers. The Eurpean Commission is currently conducting an investigation in the matter and SAFE and its members are actively involved.

The study shows that since 2012, solar manufacturing cost has declined at high rates across China, other Asia as well as the rest of the world. The regional reductions range from 33 % to 47 %. The data also shows that the cost gap between the Tier groups narrows and that Chinese cost leadership still endures.

• Skaleneffekte: Factories of China Tier 1 have much higher production capacities and output than anywhere else. The largest factory in China operates at 3.2 GW while the largest factory in Rest of World operates at 650 MW. Also average factory size is signifi cantly larger and factories are designed optimally for high output and lower unit cost. Most important
large volumes allow considerable discounts for materials and equipment.

The PV market will continue to grow in the foreseeable future, with Asia and China in particular as the largest regional demand markets. IHS estimates annual growing market in terms of installed capacity (MW) of 8.6 % from 2015–2019. In this timeframe also the global cumulative installation will double. At the same time, manufacturing cost will continue to decline, at approx. 5 % annually.

For SAFE, the study shows: solar modules coul be 20 % cheaper in Europe. Instead, the market is sealed off and company that are adapting and benefitting from energy transition have to cope with that market. As low cost results in low prices, the European solar sector needs open access to Chinese solar products. This would be the easiest way to rekindle demand. In the end, European manufacturers would also benefit from a growing market as demand for products “Made in Europe” would also increase.

You are interested in the study? Send us an email to info@safe-eu.org 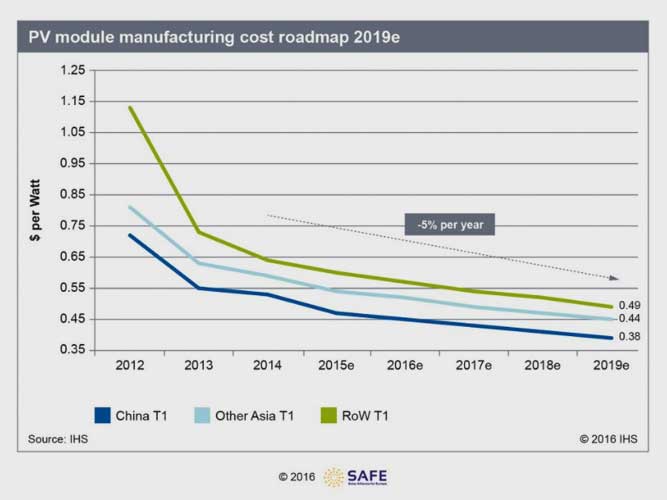