Despite the expiration of the storage-specific subsidy scheme, the German market developed very positively in the first half of 2019.

According to the analysis of the Bonn-based market and economic research institute EuPD Research this market growth is based in particular on the continuous boost in new installations of small photovoltaic systems. The number of new installations has already increased by 15% in the first half year. For the analysts further factors such as the new increase in electricity prices for private households, numerous regional subsidy programmes for home energy storage as well as falling prices for photovoltaic systems and storage systems had a positive effect on the development of home storage installations.

“Due to the strong connection between electric mobility and solar charging the sales of PV storage systems with a wall box will continue to increase significantly in the medium term as the electric mobility market grows”, Markus Hoehner, Founder and CEO of EuPD Research comments on the latest research results.

The continuous market growth in the residential energy storage market is accompanied by steady changes on the provider side. When SIEMENS entered the market at the beginning of 2019 the appeal of the energy storage market became apparent. Concerning the positioning of the various providers in Germany, the research shows that the Bavarian manufacturer sonnen once again is at the top of the ranking. The two Asian providers BYD and LG Chem follow in second and third place respectively. The domestic providers E3/DC and SENEC complement the five largest providers for home storage in Germany in the first half of 2019.

On a European level, the market share trend is slightly different. LG Chem ranks second behind sonnen while BYD ranks third. Additionally, it can be seen that there are further providers active in the European market for home energy storage that do not yet offer products in Germany, or only to a limited extent.

The presented market shares for home energy storage systems in Germany and Europe are based on an extensive supplier survey, surveys of installers and end customers as well as supplementary research by EuPD Research. It was assumed that 10% of the storage systems of suppliers with mainly two-stage distribution are still in the sales process or in storage and have therefore not yet been installed. In the case of providers with a predominantly three-stage distribution, a share of 15% was assumed for the not yet installed systems. 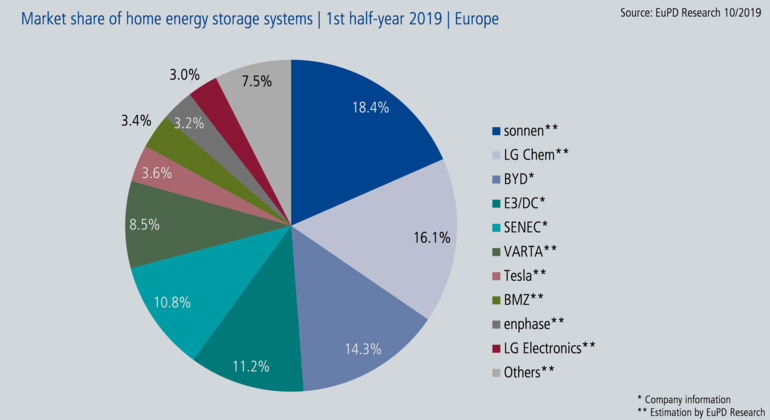