According to preliminary figures, the world has seen a new record in new wind installations, adding 63’690 MW within the year 2015. The total wind capacity of the world has reached 435 GW.

The global growth rate of 17,2 % was higher than in 2014 (16,4 %). Amongst the top 15 markets, Brazil, Poland, China and Turkey were the most dynamic countries and saw the strongest growth rates.

China has once more underpinned its role as the global wind power leader, adding 33 GW of new capacity. This represents a market share of 51,8 %.

The US market saw good performance with 8,6 GW of added capacity, the strongest growth since 2012. Low fossil fuel prices had no negative impact on the wind sector.

Germany, in anticipation of changes in legislation, installed 4,9 GW. Wind power contributed a new record of 13% of the country’s power demand in 2015.

Like a year ago, Brazil was the fourth largest market for new turbines with a market volume of 2,8 GW. It is the first major Latin America wind market.

While Canada performed well and Poland and Turkey both even climbed in the global ranking, Spain was a great disappointment with 0 MW added capacity. No country which had previously a leading role ever saw such complete standstill.

Stefan Gsänger, WWEA Secretary General: “Just several weeks after the groundbreaking Paris climate agreement, we are proud to announce that the wind community is ready to contribute its part to implementing a 100 % renewable energy and hence greenhouse gas neutral future. The new record proves what can be done – and even faster growth would be possible given the right policies are in place. Unfortunately we have to warn especially several European governments that they are about to put their leading roles in the renewable energy sectors on risk.” 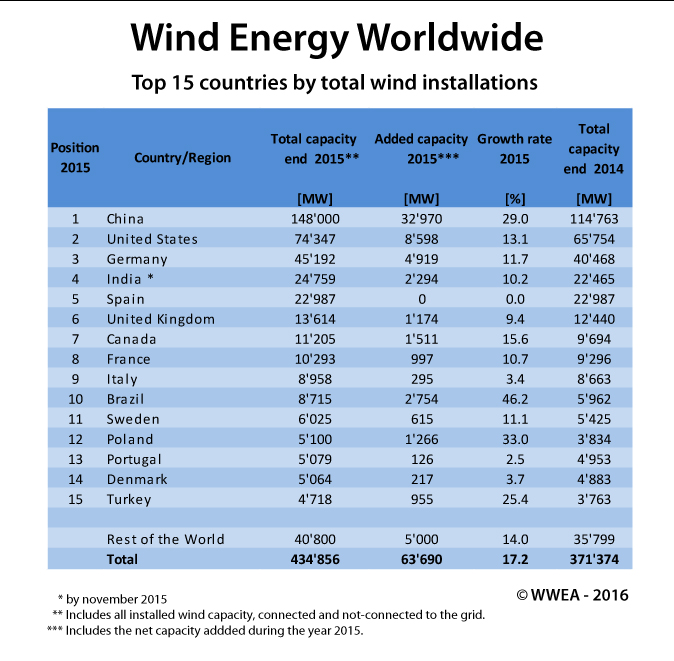