Energy consumption in Africa is the lowest in the world, and per capita consumption has barely changed since 2000 shows a new Atlas released today by the UN Environment and African Development Bank at the World Economic Forum being held in Durban, South Africa.

Current energy production in Africa is insufficient to meet demand. About a third of the total African population still lacks access to electricity and 53 per cent of the population depends on biomass for cooking, space heating and drying. A kettle boiled twice by a family in the United Kingdom uses five times as much electricity as a Malian uses in a year.

Prepared in cooperation with the Environment Pulse Institute, United States Geological Survey and George Mason University, the Atlas consolidates the information on the energy landscape in Africa. It provides information in the form of detailed ‘before and after’ images, charts, maps and other satellite data from 54 countries through visuals detailing the challenges and opportunities in providing Africa’s population with access to reliable, affordable and modern energy services.

“The Atlas makes a strong case that investments in green energy infrastructure can bolster Africa’s economic development and bring it closer to achieving the Sustainable Development Goals. It is therefore an important policy guide for African governments as they strive to catalyze national development by making use of their energy resources,” said Juliette Biao Koudenoukpo, Director and Regional Representative, UN Environment, Africa Office.

The Atlas shows both the potential and the fragility of the continent’s energy resources which are at the heart of Africa’s socio-economic development.  It highlights some success stories of sustainable energy development around the continent, but it also puts the spotlight on major environmental challenges associated with energy infrastructure development.

“This Atlas will be instrumental to ease access to information and data in the energy sector for all stakeholders, including the donor community, African governments and the private sector,” said Amadou Hott, Vice-President in charge of power, energy, climate and green growth, African Development Bank.

Reserves of coal, natural gas and oil represent 3.6 per cent, 7.5 per cent and 7.6 per cent of global reserves respectively. A growing population, sustained industrialization and rising urbanization mean that energy demand in Africa is increasing. Only an insignificant fraction of the existing energy potential has been tapped into—leaving the continent lagging behind in the production and manufacturing sectors due to low and unreliable access to energy.

Main findings and key concerns in the Atlas

The Atlas of Africa Energy Resources features over 64 maps and 73 satellite images as well as some 50 graphics and hundreds of compelling photos. The Atlas makes a major contribution to the state of knowledge on energy sector in Africa by highlighting the opportunities and challenges for sustainable development of the energy resources on the continent.

All the materials in the Atlas are non-copyrighted and available for free use, as long as the Atlas is acknowledged as the source. All images from the atlas including individual satellite images and other graphics can be downloaded from www.unep.org  and www.enviropulse.org 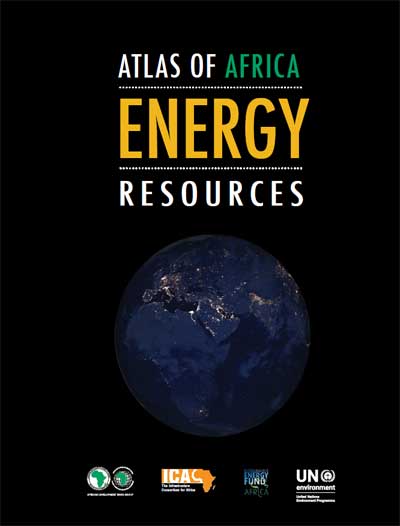