The Conference covered all aspects of wind utilisation, related policies, manufacturing, development, operation as well as economic and social issues, with a special focus on the role that distributed wind power can play to accelerate the deployment of wind power in the world.

The Conference appreciates the support of the governments and governmental as well as non-governmental organisations, especially the Israeli Government and ministries, the German Federal Ministry for Economic Affairs & Energy, IRENA, the International Renewable Energy Alliance, REN21, the Global100%RE campaign, the World Future Council, and all organisations and individuals enhancing the Conference.

The Conference recognizes that Israel is currently heavily dependent on fossil fuel combustion. The Conference applauds the Israeli government for its 17 % renewable energy target for 2030 and encourages the Israeli government to take further steps to achieve it and in due course go beyond it. The conference noted the available wind resource in Israel and encourages the government to include 3 GW of the proposed energy coming from wind energy as a mid-term target. The Conference is pleased to note that the first new wind farm in Israel in 25 years will start operation in the coming days.

The Conference appreciates the visit of the German all party Parliamentary delegation to the event and is particularly encouraged by the very positive attitude to the future of renewables and the commitment to provide continuing support to the Energiewende – the transition towards renewable energy – in Germany and beyond.

The Conference encourages the Government of Israel and of all MENA countries and beyond, to remove the barriers to renewable energy use in the region and develop a comprehensive long-term strategy that includes distributed wind power as well as local integration of renewable energies as key components. By allocating sufficient energy and thereby providing security of supply to all citizens, renewable energies have the potential of contributing to the long-term stability and peace in the region.

The Conference applauds the World Wind Energy Award 2015 to the Mali Folkecenter Nyetaa for its role as a pioneer of renewable energy in Africa and worldwide, and in particular with regard to rural electrification and all that can bring to the people of the African continent.

In addition the Conference supports the following objectives, policies and actions, some of them having been presented at previous WWECs: 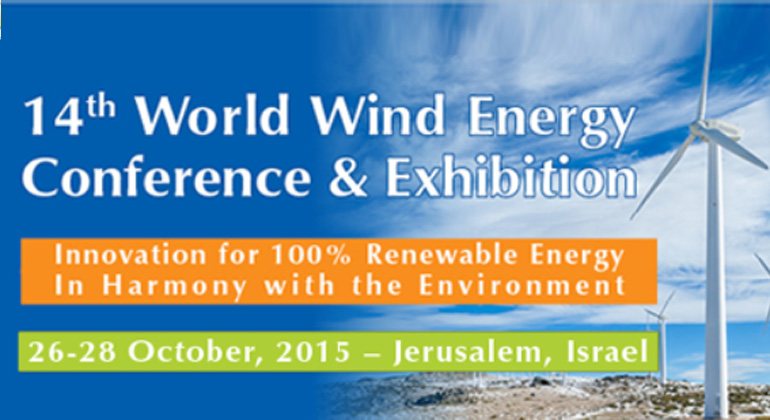