Air pollution levels remain dangerously high in many parts of the world. New data from WHO shows that 9 out of 10 people breathe air containing high levels of pollutants. Updated estimations reveal an alarming death toll of 7 million people every year caused by ambient (outdoor) and household air pollution.

“Air pollution threatens us all, but the poorest and most marginalized people bear the brunt of the burden,” says Dr Tedros Adhanom Ghebreyesus, Director-General of WHO. “It is unacceptable that over 3 billion people – most of them women and children – are still breathing deadly smoke every day from using polluting stoves and fuels in their homes. If we don’t take urgent action on air pollution, we will never come close to achieving sustainable development.”

WHO estimates that around 7 million people die every year from exposure to fine particles in polluted air that penetrate deep into the lungs and cardiovascular system, causing diseases including stroke, heart disease, lung cancer, chronic obstructive pulmonary diseases and respiratory infections, including pneumonia.

Around 3 billion people – more than 40% of the world’s population – still do not have access to clean cooking fuels and technologies in their homes, the main source of household air pollution. WHO has been monitoring household air pollution for more than a decade and,while the rate of access to clean fuels and technologies is increasing everywhere, improvements are not even keeping pace with population growth in many parts of the world, particularly in sub-Saharan Africa.

WHO recognizes that air pollution is a critical risk factor for noncommunicable diseases (NCDs), causing an estimated one-quarter (24%) of all adult deaths from heart disease, 25% from stroke, 43% from chronic obstructive pulmonary disease and 29% from lung cancer.

More than 4300 cities in 108 countries are now included in WHO’s ambient air quality database, making this the world’s most comprehensive database on ambient air pollution. Since 2016, more than 1000 additional cities have been added to WHO’s database which shows that more countries are measuring and taking action to reduce air pollution than ever before. The database collects annual mean concentrations of fine particulate matter (PM10 and PM2.5). PM2.5 includes pollutants, such as sulfate, nitrates and black carbon, which pose the greatest risks to human health. WHO air quality recommendations call for countries to reduce their air pollution to annual mean values of 20 μg/m3 (for PM10) and 10 μg/m3 (for PM25).

“Many of the world’s megacities exceed WHO’s guideline levels for air quality by more than 5 times, representing a major risk to people’s health,” says Dr Maria Neira, Director of the Department of Public Health, Social and Environmental Determinants of Health, at WHO. “We are seeing an acceleration of political interest in this global public health challenge. The increase in cities recording air pollution data reflects a commitment to air quality assessment and monitoring. Most of this increase has occurred in high-income countries, but we hope to see a similar scale-up of monitoring efforts worldwide.”

While the latest data show ambient air pollution levels are still dangerously high in most parts of the world, they also show some positive progress. Countries are taking measures to tackle and reduce air pollution from particulate matter. For example, in just two years, India’s Pradhan Mantri Ujjwala Yojana Scheme has provided some 37 million women living below the poverty line with free LPG connections to support them to switch to clean household energy use. Mexico City has committed to cleaner vehicle standards, including a move to soot-free buses and a ban on private diesel cars by 2025.

Major sources of air pollution from particulate matter include the inefficient use of energy by households, industry, the agriculture and transport sectors, and coal-fired power plants. In some regions, sand and desert dust, waste burning and deforestation are additional sources of air pollution. Air quality can also be influenced by natural elements such as geographic, meteorological and seasonal factors.

Air pollution does not recognize borders. Improving air quality demands sustained and coordinated government action at all levels. Countries need to work together on solutions for sustainable transport, more efficient and renewable energy production and use and waste management. WHO works with many sectors including transport and energy, urban planning and rural development to support countries to tackle this problem.

“Political leaders at all levels of government, including city mayors, are now starting to pay attention and take action,” adds Dr Tedros.  “The good news is that we are seeing more and more governments increasing commitments to monitor and reduce air pollution as well as more global action from the health sector and other sectors like transport, housing and energy.”

The database builds mainly on well-established, public air quality monitoring systems as a source of reliable data in different parts of the world. The primary source of data includes official reporting from governments. Other sources include Clean Air Asia and the European Environment Agency for Europe’s Air Quality e-Reporting database, ground measurements compiled for the Global Burden of Disease project, and peer-reviewed journal articles. The database together with the summary of results, methodology used for compiling the data and WHO country groupings can be found here. 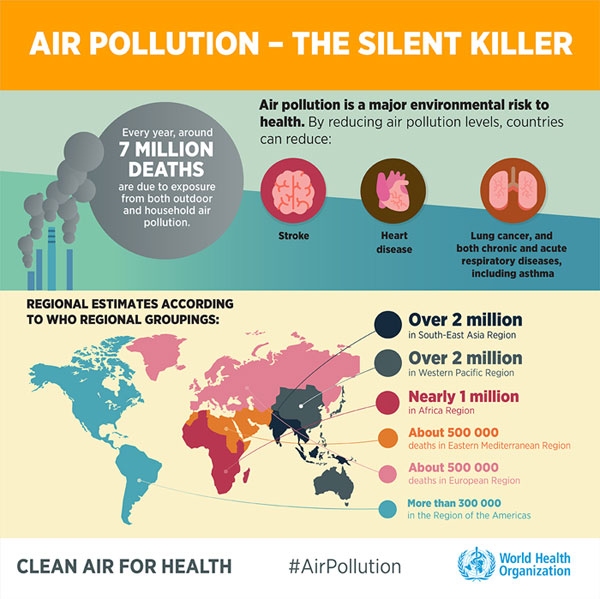 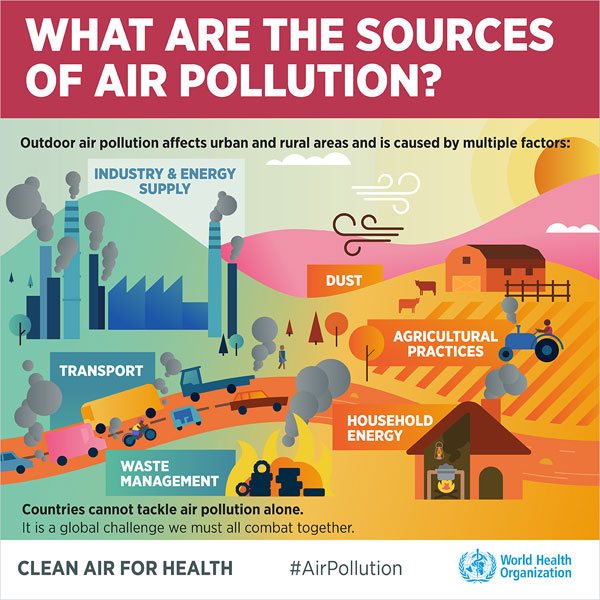 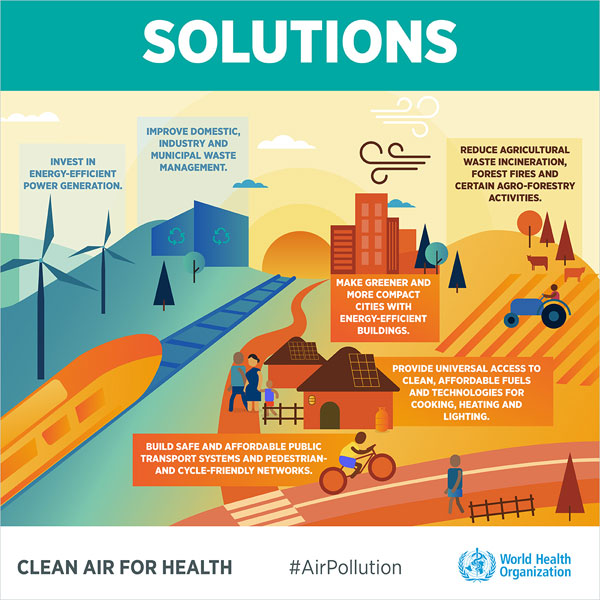