Tiny plastic particles also present a threat to creatures on land and may have damaging effects similar or even more problematic than in our oceans.

Researchers from the Leibniz-Institute of Freshwater Ecology and Inland Fisheries (IGB) and their Berlin colleagues warn: the impact of microplastics in soils, sediments and the freshwaters could have a long-term negative effect on terrestrial ecosystems throughout the world.

It is now widely accepted that microplastics contaminate our oceans and are harmful to coastal and marine habitats. And yet what effect do fragments of plastic have on ecosystems “on dry land”?

This question is the subject of a research initiated by IGB in partnership with Freie Universität Berlin that reviews previous individual studies on the topic of microplastics in relation to the effect of microplastics on terrestrial ecosystems. “Although only little research has been carried out in this area, the results to date are concerning: fragments of plastic are present practically all over the world and can trigger many kinds of adverse effects. The previously observed effects of microplastics and nanoplastics on terrestrial ecosystems around the world indicate that these ecosystems may also be in serious jeopardy,” explains IGB researcher Anderson Abel de Souza Machado, who is leading the study. Researchers from IGB have demonstrated in earlier studies that microplastics might be harmful to ecosystems when ingested by aquatic key organisms.

Over 400 million tons of plastic are produced globally each year. It is estimated that one third of all plastic waste ends up in soils or freshwaters. Most of this plastic disintegrates into particles smaller than five millimetres, referred to as microplastics, and breaks down further into nanoparticles, which are less than 0.1 micrometre in size. In fact, terrestrial microplastic pollution is much higher than marine microplastic pollution – an estimate of four to 23 times more, depending on the environment. Sewage, for example, is an important factor in the distribution of microplastics. In fact, 80 to 90 per cent of the particles contained in sewage, such as from garment fibres, persist in the sludge. Sewage sludge is then often applied to fields as fertilizer, meaning that several thousand tons of microplastics end up in our soils each year.

Potentially toxic effect on many organisms

Some microplastics exhibit properties that might have direct damaging effects on ecosystems. For instance, the surfaces of tiny fragments of plastic may carry disease-causing organisms and act as a vector that transmits diseases in the environment. Microplastics can also interact with soil fauna, affecting their health and soil functions. Earthworms, for example, make their burrows differently when microplastics are present in the soil, affecting the earthworm’s fitness and the soil condition.

Generally speaking, when plastic particles break down, they gain new physical and chemical properties, increasing the risk that they will have a toxic effect on organisms. And the more likely it is that toxic effects will occur, the larger the number of potentially affected species and ecological functions. Chemical effects are especially problematic at the decomposition stage, as spotted by the team of authors led by Anderson Abel de Souza Machado. For example, additives such as phthalates and Bisphenol A leach out of plastic particles. These additives are known for their hormonal effects and can potentially disrupt the hormone system not only of vertebrates, but also of several invertebrates. In addition, nano-sized particles may cause inflammation; they may traverse or change cellular barriers, and even cross highly selective membranes such as the blood-brain barrier or the placenta. Within the cell, they can trigger changes in gene expression and biochemical reactions, among other things. The long-term effects of these changes have not yet been sufficiently explored. However, it has already been shown that when passing the blood-brain barrier nanoplastics have a behaviour-changing effect in fish.

Humans also ingest microplastics via food: they have already been detected not only in fish and seafood, but also in salt, sugar and beer. It could be that the accumulation of plastics in terrestrial organisms is already common everywhere, the researchers speculate, even among those that do not “ingest” their food. For example, tiny fragments of plastic can be accumulated in yeasts and filamentous fungi.

The intake and uptake of small microplastics could turn out to be the new long-term stress factor for the environment. At the moment, however, there is a lack of standardized methods for determining microplastics in terrestrial ecosystems in order to produce an accurate assessment of the situation. It is often a difficult and labour-intensive process to detect tiny fragments of plastic particles in soils, for instance.

The new IGB study highlights the importance of reliable, scientifically based data on degradation behaviour and the effects of microplastics. This data is necessary to be able to respond effectively to contamination by microplastics and the risk they pose to terrestrial ecosystems – where, after all, most plastic waste that enters the environment accumulates. 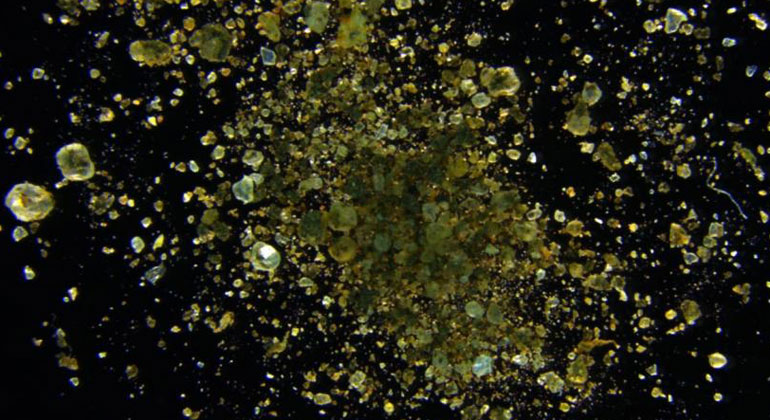 Leibniz-Institute of Freshwater Ecology and Inland Fisheries (IGB) in the Forschungsverbund Berlin e.V. 2018