The latest data show that this year continues to bring record-breaking temperatures. Every month in 2019 has ranked among the four warmest for the month in question, and June was the warmest June ever recorded. It is now confirmed that July was also an exceptional month.

The global average temperature for July 2019 was on a par with, and possibly marginally higher than, that of July 2016, which followed an El Niño event. This was previously the warmest July and warmest month of all on record. However, the difference between temperatures in July 2019 and July 2016 is small.

July is generally the warmest month of the year. This is because the large land masses of the Northern Hemisphere warm up faster than the oceans of the Southern Hemisphere can cool down during the northern summer months, and vice versa in the northern winter, so the seasonal patterns of the Northern Hemisphere drive the overall global temperatures. However, the warming trend is not limited to Julys. The animation below shows that the monthly global average surface air temperature has been increasing in all months of the year over the last four decades. When we look back over the last four years – 2015-2018 – they have been the four warmest years on record. It can also be seen that July 2019 was only marginally warmer than July 2016.

Putting July 2019 into the bigger picture, the month was close to 1.2°C above the pre-industrial level, as defined by the Intergovernmental Panel on Climate Change (IPCC). The Paris Agreement set specific ‘temperature targets’ with a goal to keep the increase in global average temperature to well below 2 °C above pre-industrial levels; and to aim to limit the increase to 1.5 °C. In the IPCC 1.5 special report, these targets relate to long-term averages, over 30-year periods, rather than individual months or years, with the current 30-year period being about 1 °C above the pre-industrial.

The average temperature value shown for July 2019 is based only on the ERA5 dataset from the Copernicus Climate Change Service (C3S), implemented by the European Centre for Medium-Range Weather Forecasts (ECMWF) on behalf of the European Union. The July 2019 average temperature was marginally higher than those of July 2016 based on the same dataset. This difference, however, is less than the typical difference between the values provided by the global temperature datasets of various institutions and as such other datasets may suggest another ranking. For instance, the average July temperatures for 2016 and 2019 calculated from the JRA-55 dataset produced by the Japan Meteorological Agency are even more similar to each other than the ERA5 values are, and lie in between the ERA5 values for July 2016 and July 2019. The July datasets from other institutions are likely to become available during the second half of August.

* The adjustment to the pre-industrial follows what is suggested in the IPCC ‘Global warming of 1.5°C’ report, which estimates the increase from the pre-industrial (defined as 1850-1900) to the 20-year period 1986-2005 to be “0.63°C (±0.06°C 5–95% range based on observational uncertainties alone)”.  The annual mean temperature difference between the periods 1981-2010 and 1986-2005 is non-significant for the datasets considered. These estimates are with respect to multi-annual reference periods, there are no estimates given for monthly values. However, there are no clear global differences between monthly trends, thus here we follow the most straightforward assumption of using 0.63°C also for all monthly anomalies. 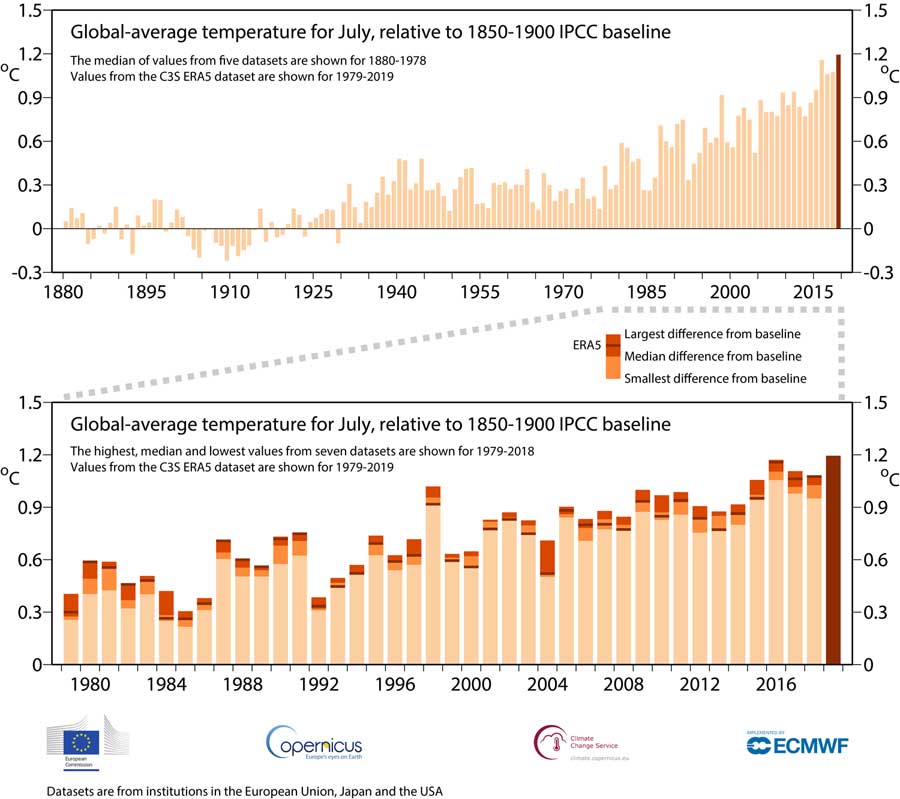