Only a small proportion of protected bogs are restored to their original condition despite this being a requirement under the Swiss constitution. It is estimated that the numerous drained raised bogs that still exist in Switzerland produce 19,000 tonnes of CO2 emissions per year.

If all these bogs were ‘rewetted’, this would halt such emissions. The max.moor mechanism devised by the Swiss Federal Institute for Forest, Snow and Landscape Research WSL makes it possible for raised-bog restoration to be used as a way to offset these emissions.

Those in Switzerland wanting to offset their flight or other greenhouse-gas emissions can now do so and thus contribute to restoring the country’s raised bogs. Rewetting a raised bog prevents a substantial volume of CO2 emissions from being released into the atmosphere. Up to now, there has been no particular mechanism for using the prevention of such emissions to offset actual emissions, mainly due to a lack of data on the exact volumes of CO2 emissions from drained bogs and those that have been rewetted. This lack makes it difficult to accurately calculate the emissions which can actually be offset.

The WSL’s new carbon offsetting approach can be used to reliably assess the level of emissions that have been prevented by rewetting raised bogs. The max.moor mechanism is based on the fact that peat is continuously degraded by ongoing drainage, releasing CO2. As a result, over time all the organic carbon still trapped in peat is released into the atmosphere. However, rewetting a bog means that over 1,000 tonnes of CO2 per hectare of potential emissions are avoided in the top 50 cm of the peat alone. By way of comparison: a flight from Zurich to New York produces 1.2 tonnes of CO2 emissions per person. Furthermore, some time after the bog has been successfully rewetted, the peat starts growing again, drawing CO2 from the atmosphere.

The max.moor carbon offsetting approach makes emission calculations simple while minimising expenditure on measurements and verification. Due to its easy manageability a substantial share of the revenue from the offsetting can be spent for rewetting bogs. Such offsetting payments are used to restore Swiss raised bogs, thus reducing CO2 emissions (currently standing at around 19,000 tonnes per year, based on IPCC standard values). Furthermore, such offsetting promotes biodiversity, enhances the Swiss landscape, improves flood protection and supports regional businesses. Thus, two out of three Swiss francs spent on raised-bog restoration projects stay in the region, with the lion’s share of wood harvesting and transport and building operations being performed by local construction firms.

For a number of years now, various European countries have been offsetting their CO2 emissions with bog restoration. Switzerland has not been among them – until now. Due to differences in topography, environment and climate, other countries’ models cannot be directly carried over into the Swiss context. The new max.moor carbon offsetting approach makes it possible for the first time in Switzerland for greenhouse-gas emissions to be offset by bog-restoration projects, using an easy-to-manage, cost-effective procedure. Two carbon offsetting service providers (myclimate and the South Pole Group) are already adopting this approach for voluntary offsetting. This means that corporate and individual CO2 emissions can now be offset in favour of Switzerland’s raised bogs.

Only just under 10% of Switzerland’s raised bogs have survived the past century in their natural condition. The rest have been drained and completely desiccated – e.g. for the 1940 ‘Battle for Cultivation’ programme to raise Swiss food production – in order to make way for grazing cattle or growing potatoes, or so that the peat could be used as a fuel. What was considered ‘progress’ at that time subsequently turned into a problem as water-retention basins disappeared and biodiversity and the number of valuable habitats declined, and the bogs, exposed to the air, have been releasing substantial volumes of CO2 ever since.

A natural bog is what is called a ‘CO2 sink’. The fact that the decaying plant matter cannot be degraded in the waterlogged soil means that in the course of millennia this organic matter accumulates there in the form of peat. In this way, bogs around the world absorb 150-250 million tonnes of CO2 per year from the atmosphere. However, as soon as the water is drained from a bog, oxygen penetrates the soil and the plant matter, visible as peat, gradually degrades. In the process, CO2 is released into the atmosphere. These emissions can only be halted by filling the drainage ditches, thereby rewetting the bogs. 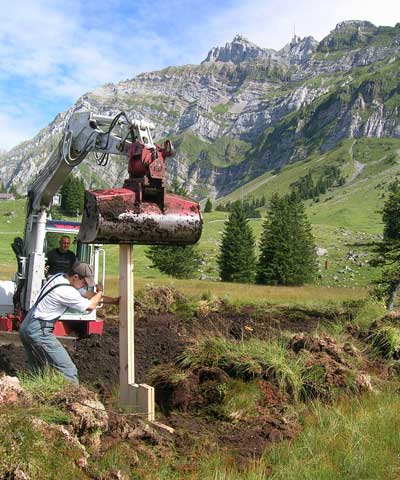 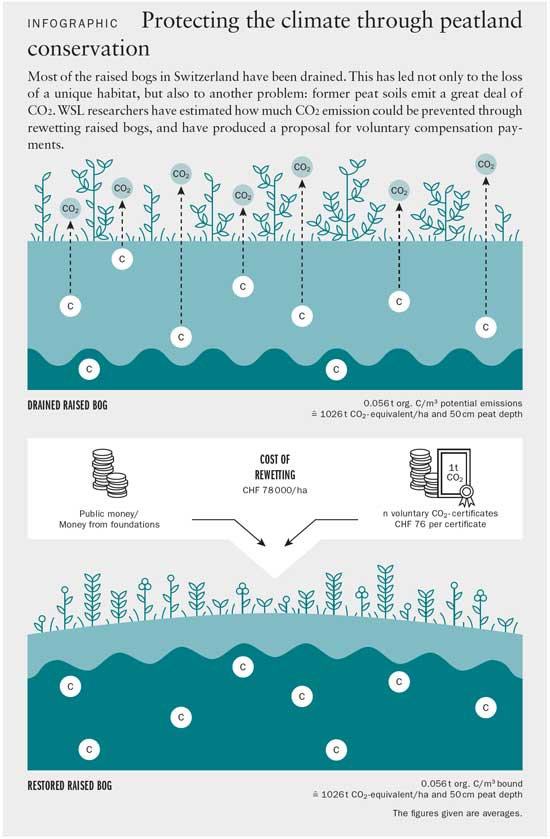