2017 year with highest weather-related losses ever recorded / Increased intensity of storms takes a toll particularly on poor countries / Puerto Rico, Sri Lanka and Dominica hardest hit in 2017 / In the past 20 years over 525,000 people have been killed by more than 11,500 extreme weather events that caused trillions US$ in damages.

Tropical cyclones have heavy impacts on an increasing number of countries. In 2017, the hurricane season in the Caribbean Sea was particularly strong and left several islands destroyed. Furthermore there are some developing countries that have difficulties to recover as they are regularly hit by weather catastrophes. Especially poorer countries like Sri Lanka, Nepal or Vietnam are facing great challenges. All in all, in 2017 11.500 people died because of extreme weather events. Economic damages amounted to approximately US$ 375 billion (calculated in purchasing-power parity, PPP). So it was the year with the highest weather-related losses ever recorded. These are some of the key findings of the Global Climate Risk Index, published today by Germanwatch at the climate summit in Katowice.

“Recent storms with intensity levels never seen before have had disastrous impacts”, says David Eckstein of Germanwatch, lead author of the index. “In 2017, Puerto Rico and Dominica were hit by “Maria”, one of the deadliest and costliest hurricanes on record. Puerto Rico ranks first and Dominica ranks third in the index of the most-impacted countries in 2017.” In many of the countries most affected by natural disasters in the past year, unusually extreme rainfall was followed by severe floods and landslides. This is true also for Sri Lanka (ranked No. 2 in 2017): exceptionally heavy rain caused dramatic flooding that killed 200 people and left hundred thousands of people homeless. “Poor countries are hardest hit. But extreme weather events also threaten the further development of upper middle income countries and can even overburden high income countries”, Eckstein adds.

In the past twenty years from 1998 to 2017, Puerto Rico, Honduras and Myanmar were impacted the strongest, according to the long-term index. In this period, globally over 526,000 fatalities were directly linked to more than 11,500 extreme weather events. The economic damages amounted to approximately US$3.47 trillion (calculated in PPP).

The vulnerability of poorer countries becomes visible in the long-term index: eight of the ten countries most affected between 1998 and 2017 are developing countries with low or lower middle income per capita. But industrialised and emerging economies must also do more to address climate impacts which they themselves feel more clearly than ever before. Effective climate protection as well as increasing resilience is therefore also in the self-interest of these countries”, Eckstein emphasises. “For example, the United States ranks twelfth in the 2017 index, with 389 fatalities and US$ 173.8 billion in losses this year caused by extreme weather conditions.”

“COP24 has to increase efforts to properly address loss and damage”, Eckstein says. “At present it is a cross-cutting issue referenced throughout various negotiation streams, with significant risk of being omitted from final negotiation text. Countries like Haiti, Philippines, Sri Lanka and Pakistan are repeatedly hit by extreme weather events and have no time to fully recover. It is important to support these countries in climate change adaptation – but that is not sufficient. They need predictable and reliable financial support for dealing with climate-induced loss and damage as well.”

Germanwatch receives its data for calculating the Global Climate Risk Index from the NatCatSERVICE database of the reinsurance company Munich Re, as well as the socio-economic data of the International Monetary Fund (IMF). Even though the evaluation of the rising damages and fatalities do not allow for simple conclusions on the influence of climate change on these events, it shows the increase of heavy disasters and does give a good impression of the vulnerability of nations. 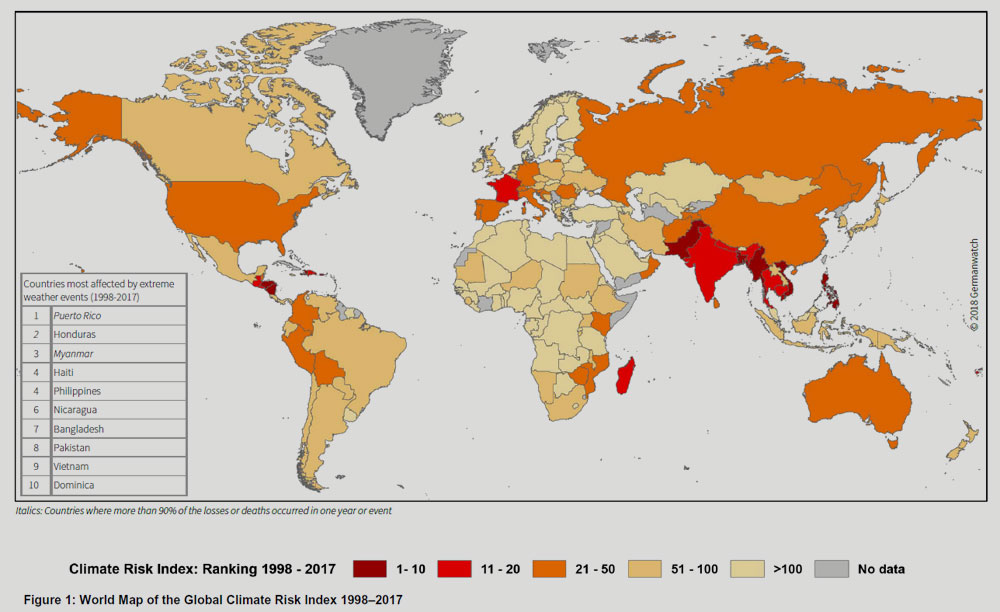