Most of the world’s gorillas and about one-third of all chimpanzees live in Western Equatorial Africa.

These great apes are undergoing a dramatic decline due to poaching, disease and habitat loss, driven by demands for bushmeat, a lack of law enforcement, by corruption, and by increased access to their once-remote habitat. More recently the forest itself has come under threat from the expansion of industrial agriculture, which will result in massive losses of great ape habitat unless rapid, targeted action is taken. Conservation strategies and actions must be designed to respond to these pressures to maintain great ape populations at their present numbers.

This document is the product of the second regional workshop on conservation planning for the two subspecies of great ape, which brought together senior representatives of the wildlife authorities in the six range states, protected area managers, NGOs, scientists, wildlife health experts, industry representatives and donors. These stakeholders assessed great ape conservation needs for the next 10 years, building on an action plan published in 2005, to develop a new plan of action that will serve as a guide for range-state governments, donors and conservation organisations to target conservation investment in the region.

New survey data, collected between 2003 and 2013, were used to verify, refine and re-assess priority areas for great ape conservation. Statistical modelling of the survey data was used to create predicted density maps for the entire geographic range of central chimpanzees and western lowland gorillas. Priority landscapes were then delineated using a decision support tool and a suite of criteria that included the presence of an existing or planned protected area and a minimum population target of 2,000 great apes (gorillas and chimpanzees combined). The results produced 18 priority conservation landscapes (see Table 1), six of which were classified as being of exceptional priority as they each harbour more than 5% of the total number of great apes in the region (i.e., 5% of the global population of western lowland gorillas and central chimpanzees). One landscape was classified as an ‘Ebola recovery priority’ and another was classified as a ‘survey priority’. The total area of the 18 landscapes is 51% of the range of these two taxa, but holds over 77% of the individual great apes. Protected areas alone hold only 21% of these great apes, further underlining the need for effective management and protection of large areas outside formally protected areas in order to maintain their populations.

The action plan lays out a conservation strategy for gorillas and chimpanzees in Western Equatorial Africa. This geographic range covers 655,800 km2 and the suitable habitat grades from gallery forests at the savannah edge through swamp, lowland terra firma and submontane forests. Low birth rates, long periods of infant and juvenile dependence, and late age of maturity mean that great apes are slow to recover from population reduction events when compared to the faster- breeding ungulates and smaller primates with which they co-exist.

Since they are threatened with extinction, great apes are completely protected by national and international laws in all countries of their range, and it is, therefore, illegal to kill, capture or trade in live apes or their body parts. Nonetheless, chimpanzees and gorillas are killed by opportunistic poachers, typically to supply an illegal and elitist commercial trade in bushmeat ‘delicacies’.

Poaching and disease have been responsible for considerable declines in great ape populations in the region over the last few decades. Of particular note in Africa was the loss of over 90% of the great apes inhabiting a vast swathe of land stretching from northeastern Gabon to western Congo as a result of successive Ebola virus disease outbreaks between the 1990s and 2005. Population losses from poaching are due to large numbers of people having access to previously remote ape habitat, facilitated by the construction of open access roads or railroads associated with logging and mining. Infrastructure development generally takes place without regulation and enforcement of reduced impact procedures, and has severe impacts on the environment in terms of habitat loss and degradation and on the wildlife, the populations of which are severely impacted by poaching or displacement.

At the same time, however, the region offers useful best practices from pioneering examples of suc- cessful collaboration with the private sector in minimizing negative impacts of extractive industry on great apes—including the creation of protected areas through biodiversity offsets and private- public partnerships for wildlife management in logging concessions. Now the region is also attract- ing agroindustries, especially palm oil and rubber producers, and the destruction of natural forest to make way for crops will have a profound effect on great apes and other forest-dwelling species.

In addition, the arrival of a large labour force to work in the plantations creates additional pressures on the environment. Careful, integrated land-use planning will be vital to minimise the impacts of new industries on wildlife and the functionality of the region’s forests.

Over the next decade, the main actions needed to ensure the survival of great apes in Western Equatorial Africa will be (i) law enforcement in conjunction with improved regulations and sanctions; (ii) careful, holistic national and regional land-use planning; and (iii) outreach to and sensiti- sation of all sectors that deal with land and the protection of natural resources: law enforcement and judiciary, protected area staff, mining, logging, and agricultural industries, tour operators, and communities. Avoidance of disease transmission from humans to apes can be achieved with out- reach and regulations. Avoidance of Ebola in great ape populations is still out of reach, but steps to enhance our understanding of the virus will greatly improve our ability to either mitigate or adapt conservation interventions accordingly. At the same time the monitoring of law enforcement efforts, great ape population abundance and distribution, and disease prevalence in vulnerable locations will allow adaptive and more effective management by national wildlife agencies and protected area authorities. Maintaining large, intact and well-protected areas of forest will be key to maintaining great ape populations in the long term, and this can only be done by a combination of the actions detailed in this plan. 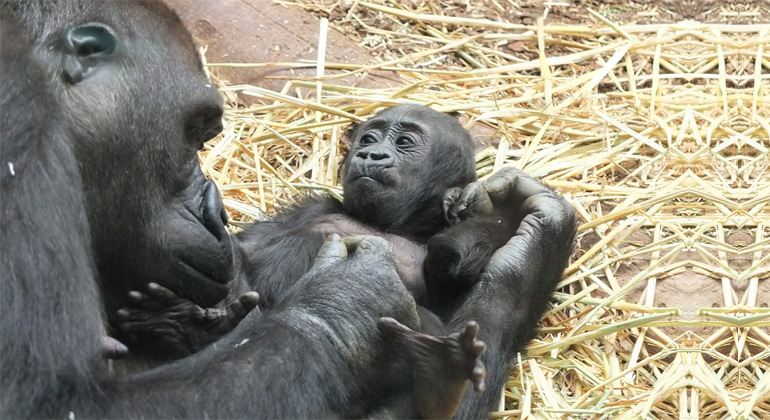