A mature and strong El Niño event, which is contributing to extreme weather patterns, is expected to strengthen further by the end of the year, according to the latest Update from the World Meteorological Organization.

Peak three-month average surface water temperatures in the east-central tropical Pacific Ocean will exceed 2 degrees Celsius above normal, placing this El Niño event among the three strongest since 1950. (Strong previous El Niños were in 1972-73, 1982-83 and 1997-98).

The El Niño-Southern Oscillation is a naturally occurring phenomenon which is the result of the interaction between the ocean and atmosphere in the east-central Equatorial Pacific. Typically, El Niño events peak late in the calendar year, with maximum strength between October and January of the following year. They often persist through much of the first quarter of that year before decaying.

“Severe droughts and devastating flooding being experienced throughout the tropics and sub-tropical zones bear the hallmarks of this El Niño, which is the strongest for more than 15 years,” said WMO Secretary-General Michel Jarraud.

“We are better prepared for this event than we have ever been in the past. On the basis of advice from National Meteorological and Hydrological Services, the worst affected countries are planning for El Niño and its impacts on sectors like agriculture, fisheries, water and health, and implementing disaster management campaigns to save lives and minimize economic damage and disruption,” he said.

“The level of international, national and local mobilization is truly unprecedented, exemplifying the value of actionable climate information to the society”, said Mr Jarraud.  “The preparedness for this El Niño will benefit from the systems WMO has been working to strengthen since the last major event in 1997-1998”, he added.

WMO released its Update on the eve of an international El Niño Conference in New York, of which WMO is a major co-sponsor, to increase scientific understanding of this event as well as its impacts, and help boost resilience to anticipated global socio-economic shocks.

“Our scientific understanding of El Niño has increased greatly in recent years. However, this event is playing out in uncharted territory. Our planet has altered dramatically because of climate change, the general trend towards a warmer global ocean, the loss of Arctic sea ice and of over a million square km of summer snow cover in the northern hemisphere,” said Mr Jarraud.

“So this naturally occurring El Niño event and human induced climate change may interact and modify each other in ways which we have never before experienced,” he said.

“Even before the onset of El Niño, global average surface temperatures had reached new records. El Niño is turning up the heat even further,” said Mr Jarraud.

It is important to note that El Niño and La Niña are not the only factors that drive global climate patterns.  For example, the state of the Indian Ocean (the so-called Indian Ocean Dipole), or the Tropical Atlantic Sea Surface Temperature, are also capable of affecting the climate in the adjacent land areas. 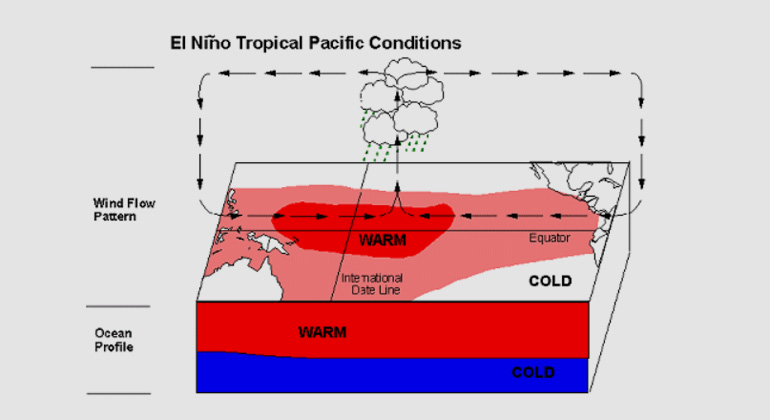