The European Parliament and the Council have signed into law the new National Emissions Ceilings (NEC) Directive, based on a Commission proposal that sets stricter limits on the five main pollutants in Europe. It will enter into force on 31 December 2016.

When fully implemented, the Directive will reduce by almost 50% the negative health impacts of air pollution, such as respiratory diseases and premature death, by 2030. Even if air pollutants are invisible killers, people are increasingly aware and concerned at the quality of the air they breathe and the agreement of stricter limits in the NEC is therefore an important achievement. It will also have substantial benefits for the quality of fresh water, soil, and ecosystems and help address the impacts of harmful particles causing climate change like black carbon. The Directive is the central element of the Commission’s more comprehensive Clean Air Programme for Europe.

Karmenu Vella, Commissioner for the Environment, Fisheries and Maritime Affairs, said: “The new European air quality rules are a significant landmark in the fight against this invisible killer that is air pollution. Air pollution kills over 450 000 people in Europe each year. This is more than ten times as many as road traffic accidents. Now it is for the national governments to start with implementation so that people can benefit from cleaner air. We will work with Member States to support them in this challenge for improving the health of EU citizens.”

Putting the new rules into practice

The role of the Member States in coordinating and implementing the Directive at national level is very important. Member States must transpose the Directive into national legislation by 30 June 2018 and produce a National Air Pollution Control Programme by 2019 setting out measures to ensure that emissions of the five main air pollutants are reduced by the percentages agreed by 2020 and 2030.  They must also coordinate with plans in fields such as transport, agriculture, energy and climate. This will require investment, but the costs will be many times outweighed by the benefits in cost savings, particularly on health care and sickness at work. The recently published Commission proposal for an Energy Union Governance Regulation highlights the importance of synergies between air quality and climate and energy policies and the new NEC Directive.

The Commission will work with Member States to ensure sound implementation, for example by setting up a new Clean Air Forum by autumn 2017. This will bring together stakeholders to exchange experience and good practice. The Commission will also facilitate access to EU funding instruments.

Finally, the Directive will pave the way for the ratification of the revised Gothenburg Protocol internationally agreed by Member States in 2012 under the United Nations Economic Commission for Europe. This will reduce pollution in the Eastern European, Caucasus and Central Asian states benefiting both the countries themselves and the EU citizens who are most directly exposed to transboundary pollution.

In December 2013 the Commission published the Clean Air Programme for Europe, which updated the air policy objectives for 2020 and 2030. It comprised a proposal on medium-sized combustion plants (Directive 2015/2193); the proposal for a new NEC Directive; and a proposal for ratification of the recently amended Gothenburg Protocol.

The 2020 reduction commitments are identical with those that Member States have already agreed internationally in the 2012 revision of the Gothenburg Protocol. The 2030 commitments require substantially deeper reductions. These will help to reduce transboundary pollution and background concentrations across Europe.

Both the sectors and some of the substances relevant for air policy are relevant also for climate and energy policy. Every effort was made to ensure close coordination between the air quality proposals and those implementing the Union’s greenhouse gas (GHG) and energy objectives.

All sectors will need to contribute to the effective implementation of the policy, including those such as agriculture which have reduced less in the past. The Commission will work closely with Member States and stakeholders to ensure delivery of the health and environmental benefits. 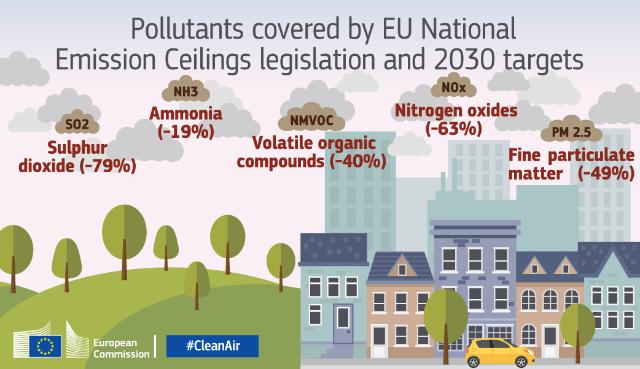