Can effective marine management mitigate climate change impacts so that the Baltic Sea regains a good environmental status? Can record blue-green algae blooms and other extreme events with an impact on future tourism be averted?

A team led by Markus Meier from the IOW now presents a study, in which various greenhouse gas and nutrient pollution scenarios are modelled up to the year 2100. Only in the most optimistic scenario – nutrient reduction according to a perfect implementation of the Baltic Sea Action Plan – a good environmental status is achievable and extreme algae blooms can be avoided despite increasingly frequent heat spells.

Excessive nutrient loads are a major ecological problem for the Baltic Sea. The result: excessive
phytoplankton growth – especially blue-green algae blooms in summer. Dying and decaying
algae blooms in turn promote oxygen deficiency in deeper water, where then only specialised
bacteria can survive, but no higher organisms such as mussels or fish. Although all the Baltic
Sea riparian states agreed on clearly defined nutrient reduction targets within the framework of
the Baltic Sea Action Plan (BSAP) more than 10 years ago, implementation is slow and the
“Good Environmental Status” of the Baltic Sea as defined in the BSAP will not be achieved by
2021 as planned. In addition, more and more studies indicate that climate change will
exacerbate the problem of eutrophication.

An important reason for aiming to achieve a good environmental status is the high recreational
value of the Baltic Sea – not least because tourism is of great importance for the economy of the
entire Baltic Sea region. Whether or not tourists find their visit to the sea attractive, however, is
usually not determined by average temperatures or by the general state of the Baltic Sea
ecosystem (as reflected by BSAP indicators). It is rather extreme events, such as long lasting
extreme heat spells or extensive blankets of poisonous or smelly algae close to the beach that
make a lasting impression. “To date, such extreme events have not been taken into account in
analyses of future climate change impacts on the Baltic Sea,” says Markus Meier, climate
expert at the IOW and in charge of the study, which has now been published in the renowned
journal Ambio. “Our modelling up to the end of the 21st century therefore focused on the
following questions: Can the Baltic Sea still achieve a good environmental status at all? If so,
when and under what conditions? And for the first time we investigated, how the probability of
extreme events relevant to the recreation and tourism sector will change,” adds Meier.

The research team simulated various future scenarios, in which they coupled three nutrient
pollution scenarios (1. perfect implementation of the BSAP targets, 2. continuation of the
current situation, 3. worst-case scenario with increasing pollution due to growing population
numbers) each with one of two greenhouse gas pollution scenarios (medium and high
pollution). The development of classical BSAP indicators such as Secchi depth, nutrient
concentrations and oxygen deficiency in deep water was analysed. Indicators for extreme
events included the occurrence of summer heat waves (expressed as the number of
successive “tropical nights” warmer than 20 °C) as well as permanently high sea surface
temperatures (above 18 °C) and record blue-green algae blooms (number of bloom days per
year, which must be higher than all previously observed). The simulation period covered the
years 1975 to 2100 in order to evaluate the predictive value of the modelling results on the
basis of already measured data.

“According to our scenario calculations, the Baltic Sea region will change significantly due to
climate change,” Markus Meier comments on the results. “Depending on which climate
scenario we base our calculations on, it will become 2 – 4 °C warmer in midsummer. Between
2070 and 2100, high greenhouse gas concentrations will lead to summer heat waves with
tropical nights in almost the entire Baltic Sea region that on average last 2 – 3 weeks and in
extreme cases up to two months non-stop. These changes are also reflected in the water
temperatures, Meier continues. By the end of the century, the surface temperature of the Baltic
Sea on average will be 2 – 3 °C warmer, and summer sea surface temperatures above 18 °C
might last up to a month longer than today. “Taking Warnemünde as an example, the models
show that, compared to today’s climate, record sea surface temperatures will occur much more
frequently in the near future up until 2050: Depending on the scenario, this will happen 200 –
400 % more frequently than expected,” emphasises the marine physicist.

What at first glance looks like a plus for visitors to the Baltic Sea – numerous ‘tropical nights’,
high swimming temperatures over many weeks –belongs, however, to the kind of extreme
events that make negative impacts on tourism increasingly more likely. For one thing, such
conditions generally promote the development of blue-green algae blooms. Markus Meier:
“According to our calculations, record blue-green algae blooms temporarily will become rarer
after 2025 in all scenarios, but only if a reduction of nutrients is implemented strictly according
to BSAP, they will stay away permanently.” And only then will the environmental goals set by
the BSAP – e.g. with regard to Secchi depth and oxygen deficiency in deep water – be achieved
before 2100 for all parts of the Baltic Sea, Meier says.

“If, instead, we continue as before or if the nutrient load even increases at high greenhouse gas
concentrations, the likelihood of extreme blue algae blooms to occurr is 10 times higher at the
end of the century than in today’s climate. And if we do not achieve the BSAP environmental
goals, we will have to face numerous other negative consequences for the Baltic Sea
ecosystem,” stresses Meier. Furthermore, it is known from studies in other temperate regions
that extreme heat events and frequent heat waves significantly increase health and mortality
risks. “Here in the Baltic Sea, for example, this could mean that infections with the lifethreatening, sepsis-causing Vibrio bacteria occur more frequently,” explains Markus Meier.

“The Baltic Sea is at a crossroads. This is critical, but it also means that we still have it in our
hands where it is heading. We can keep the Baltic Sea attractive as an environment and a
tourist destination in the long term through rigorous marine management based on the clear
BSAP regulations and – even if this is more difficult – through increased climate protection
efforts,” Markus Meier concludes on the study results. 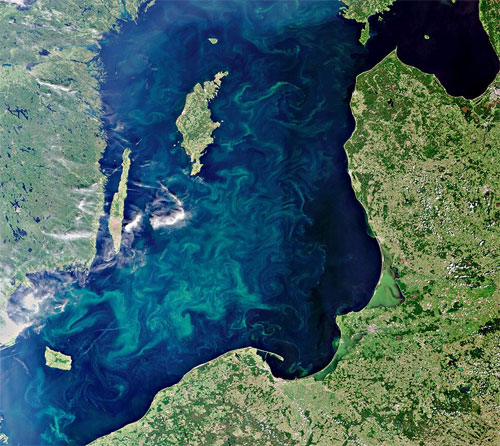