People in low and lower-middle income countries were five times more likely to be forced from their homes by “sudden-onset” weather disasters, like floods and storms, than people in richer countries, according to Oxfam.

In “Uprooted by Climate Change,” Oxfam illustrates the ruthless inequality of climate change; poor communities, whose greenhouse gas emissions are barely measurable, are at a much higher risk of displacement than those who are doing the most harm to the environment.

Data from 2008 to 2016 shows that on average, extreme weather displaced 14 million people (0.42 percent of the population) in these countries, compared to approximately 1 million (0.08 percent) in high-income countries. In total, 23.5 million people were newly displaced in 2016 by extreme weather. This total is likely an understatement because these numbers don’t account for “slow-onset” disasters like drought and sea-level rise.

Oxfam also estimates around 1.9 million people were displaced due to droughts in the first nine months of 2017 alone.

“How many more ‘once-in-a-lifetime’ storms will it take before our leaders face up to what’s going on and act?” said Tracy Carty, Oxfam’s climate change expert. “Climate change is eating away shores and flooding homes. It’s leaving farmland bone-dry, shattering the lives of millions who did virtually nothing to cause it. It’s unconscionable to leave poor communities alone to deal with disasters they did not create.”

The United Nation’s climate conference, COP 23, kicks off Nov. 6, in Bonn, Germany. The conference will be chaired by Fiji, the first small island nation to do so, and a country on the frontline of climate change. Around 55,000 people in Fiji were displaced and one-fifth of the island’s gross domestic product was wiped out after Cyclone Winston in 2016.

The report also describes how women, children and indigenous peoples are disproportionately affected by climate change. For women, being displaced means higher risks of violence and greater difficulty getting the help they need.

“Uprooted by Climate Change” shows how people on the frontlines of climate change are dealing with the threat of displacement. For example, communities in Kiribati intend to do everything possible to remain on their islands, despite the rising seas and higher storm surges. For them, like many so other communities, relocation is a last resort.

“I hope that my people remain here, living with the surroundings we’re familiar with, where our parents and ancestors are buried,” said Claire Anterea, a local environmental leader and Oxfam partner. “That’s what my hope for my country is, for things to remain as simple as this and as beautiful as always.”

Oxfam is calling on government leaders to deliver:

“Inaction has gotten us to this point, but it’s not too late yet to do what’s needed to save millions of lives,” said Carty. “While it might sometimes seem like the odds are insurmountable, the brave determination of the Pacific communities inspires us all; it’s time for everyone to follow their lead and fight for our future.” 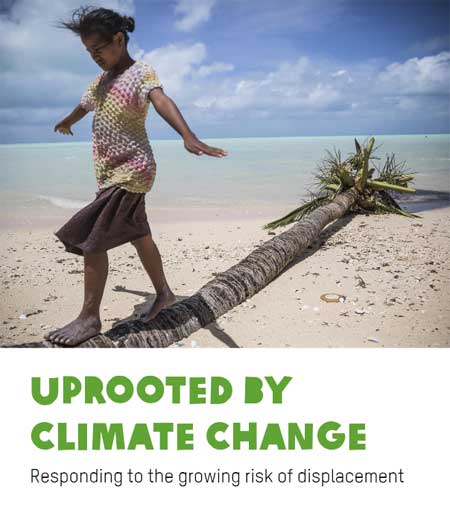