Pastures with sycamore trees are biodiversity hotspots. In fact, botanist Thomas Kiebacher from the Federal Institute for Forest, Snow and Landscape Research (WSL) has found out that these traditionally cultivated landscapes are home to over 500 species of mosses and lichens.

More than 50 of these species are on Red Lists for endangered species, and 10 of them are even threatened with extinction in Switzerland.

In his doctoral thesis, Kiebacher investigated the mosses and lichens growing on around 90 trees in alpine sycamore pastures. “The aim of the research project was to gain a clearer understanding of the ecological requirements of mosses and lichens and how we can take targeted measures to protect them. Because around 40% of all mosses and a third of all tree- and ground-dwelling lichens in Switzerland are endangered”, says Kiebacher.

The researcher would also like to help conserve sycamore pastures because these park-like landscapes bear witness to a centuries-old cultivation method, which not only used these green spaces as pasture land, but also gathered the trees’ foliage for use as bedding in cowsheds and their wood for heating. Yet many of these cultivated pastures have already been lost, and “today dead sycamores are rarely replaced like they used to be”, Kiebacher was told by older local farmers when he asked them how the use of sycamore pastures had changed over the past century.

Over a two-year period, Kiebacher collected more than 20,000 moss and lichen samples from six locations in Switzerland, Austria and Germany. His results have now been presented in a number of specialist studies.

Kiebacher’s research shows that about a fifth of all mosses and lichens known in Switzerland grow in sycamore pastures. In all, he identified 314 mosses and 232 lichens, more than 50 of which are endangered. Furthermore, on a number of sycamore trees the botanist found Rudolph’s trumpet moss (Tayloria rudolphiana), a rare species that is protected throughout Europe and occurs almost exclusively in the northern Alps. Consequently, Switzerland bears great responsibility for conserving this species.

To record as many of the trees’ lichens and mosses as possible, Kiebacher even climbed up into the treetops. These efforts paid off, for a third of all mosses and even two-thirds of the lichens only flourish in the trees’ upper reaches, probably because that is where quite particular environmental conditions prevail. “This finding is very important. The crowns of trees should always be included in biodiversity studies on tree- and ground-dwelling mosses and lichens”, says Kiebacher, one of only a few researchers to have used this special specimen-gathering technique so far.

And it’s not just the sycamore trees themselves that are bursting with biodiversity, but also the ground vegetation beneath them, for in total Kiebacher found almost 350 vascular plants and over 250 moss species there. The researcher explains the large variety of species in terms of the great diversity of conditions on pastureland sites, where the spaced-out trees produce a patchwork of sunny and shady spots.

Kiebacher found that the oldest sycamores had the greatest species diversity, though some species, like the endangered bristle moss (Orthotrichum rogeri), prefer to grow on young trees. Consequently, Kiebacher points out that “it is important to maintain trees of different ages if we want to encourage broad diversity and secure the long-term future of sycamore pastures”.

The researcher will sum up the results of his five years of research on sycamore pastures in a book to be published in the Bristol series in autumn 2017. He not only hopes this will raise public awareness that sycamore pastures constitute a hitherto neglected habitat type with great biodiversity, but also that more sycamore pasture conservation projects like the one in the Diemtig Valley in the canton of Bern will be implemented. 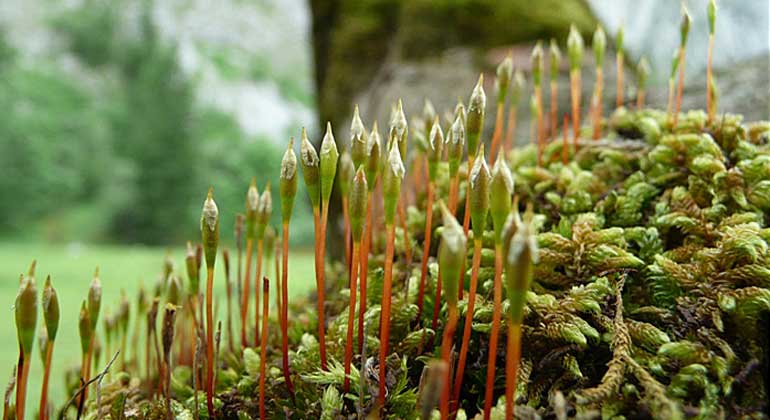