20-year review shows 90% of disasters are weather-related; US, China, India, Philippines and Indonesia record the most.

A new report issued today by the UN, “The Human Cost of Weather Related Disasters”, shows that over the last twenty years, 90% of major disasters have been caused by 6,457 recorded floods, storms, heatwaves, droughts and other weather-related events.

The report and analysis compiled by the UN Office for Disaster Risk Reduction (UNISDR) and the Belgian-based Centre for Research on the Epidemiology of Disasters (CRED) demonstrates that since the first Climate Change Conference (COP1) in 1995, 606,000 lives have been lost and 4.1 billion people have been injured, left homeless or in need of emergency assistance as a result of weather-related disasters.

The report also highlights data gaps, noting that economic losses from weather-related disasters are much higher than the recorded figure of US$1.891 trillion, which accounts for 71% of all losses attributed to natural hazards over the twenty-year period. Only 35% of records include information about economic losses. UNISDR estimates that the true figure on disaster losses – including earthquakes and tsunamis – is between US$250 billion and US$300 billion annually.

Introducing the report, Ms. Margareta Wahlström, head of UNISDR, said: “Weather and climate are major drivers of disaster risk and this report demonstrates that the world is paying a high price in lives lost. Economic losses are a major development challenge for many least developed countries battling climate change and poverty.

“In the long term, an agreement in Paris at COP21 on reducing greenhouse gas emissions will be a significant contribution to reducing damage and loss from disasters which are partly driven by a warming globe and rising sea levels. For now, there is a need to reduce existing levels of risk and avoid creating new risk by ensuring that public and private investments are risk-informed and do not increase the exposure of people and economic assets to natural hazards on flood plains, vulnerable low-lying coastlines or other locations unsuited for human settlement.”

Ms. Wahlström said that the development year had started this March with the adoption of the Sendai Framework for Disaster Risk Reduction, a 15-year package endorsed by the UN General Assembly, which sets out clear targets for a substantial reduction in disaster losses, including mortality, numbers of people affected, economic losses and damage to critical infrastructure including schools and hospitals.

KEY DETAILS FROM THE REPORT

Asia accounts for the lion’s share of disaster impacts including 332,000 deaths and 3.7 billion people affected. The death toll in Asia included 138,000 deaths caused by Cyclone Nargis which struck Myanmar in 2008.

The extent of the toll taken by disasters on society is revealed by other statistics from CRED’s Emergency Events Data Base, or EM-DAT: 87 million homes were damaged or destroyed over the period of the survey.

Overall, heatwaves accounted for 148,000 of the 164,000 lives lost due to extreme temperatures. 92% of heatwave deaths occurred in high-income countries, with Europe accounting for 90%.

Drought affects Africa more than any other continent, with EM-DAT recoding 136 events there between 1995 and 2015, including 77 droughts in East Africa alone. The report recommends that there needs to be improved data collection on indirect deaths from drought. 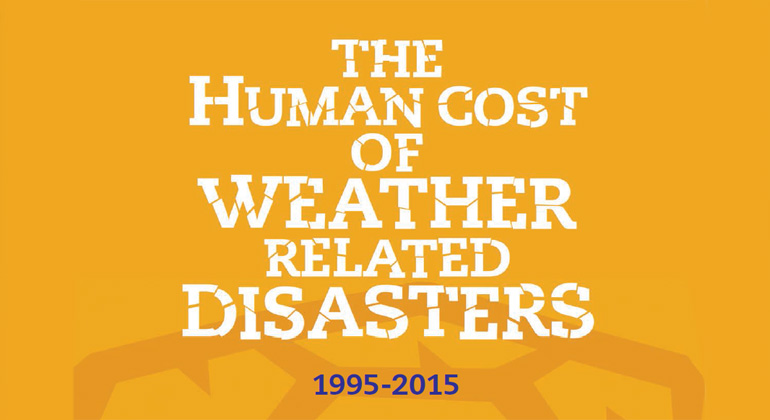