Trees cool their environment  and “heat islands” like Munich benefit from it. However, the degree of cooling depends greatly on the tree species and the local conditions. In a recent study, scientists at the Technical University of Munich (TUM) compared two species of urban trees.

It is cooler under black locusts, especially on hot summer days. This has significant implications for landscape architecture and urban planning: “Tree species such as the black locust that consume little water can provide a higher cooling effect if they are planted on grass lawns,” Dr. Mohammad Rahman from TUM explained. “The surrounding soil remains moister thanks to the trees, the grass dissipates additional heat through the evaporation of water and thus reduces the temperature near the ground.” This is an important finding obtained by the team led by Humboldt research fellow Rahman.

A look under the treetops

Trees are considered to be nature’s air conditioners, making them the most practical way of alleviating the heat in cities such as Munich. The Bavarian capital is the third-largest and the most densely populated city in Germany. It has an air temperature up to six degrees Celsius warmer than its rural surroundings. A team from the Chair for Strategic Landscape Planning and Management and the Chair of Forest Growth and Yield Science at TUM has now used combined sensor and storage devices (data loggers) to investigate how the microclimate develops below urban treetops in particular.

This was carried out on summer days with varying temperatures at different locations in Munich — close to the East Station of Munich and Messestadt Riem. With the little-leaved linden, the 2016 tree of the year, and the black locust — also known as false acacia — they selected two popular but contrasting urban tree species to analyze the complex interplay of location factors, current weather conditions, and tree type. In light of climate change, the focus was on the cooling effect on very hot days.

Black locusts need less water — and are therefore better suited for cities
The analysis by the research team becomes clearer by comparison: The output of a mechanical air conditioner is between one and ten kilowatts (kW) that of a linden tree up to 2.3 kW. This cooling capacity is fed by various processes such as the dense treetops that provide shade. Or the fact that the leaf surfaces reflect the short-wave rays of the sun and also use them for transpiration.

These cooling mechanisms are common in all plants including grass. However, with bigger and denser canopies along with higher water loss from the stomata of their leaves, linden trees use a large percentage of the intercepted radiation to vaporize them, hence cooling the surrounding micro-climate better.

However, there are several differences to the luxuriantly blooming black locust: Its crown is less dense, the leaf surface is smaller, and hence the transpiration is lower. That makes the linden tree more effective when it comes to cooling on mild summer days. However, the black locust needs less water than the linden tree, which takes more water out of the soil during the high heat. Therefore in case of grass lawns additional cooling function from the grass surfaces under black locust trees seem more effective. With the climate change and accelerating drought either we have to water the grass lawns for having higher cooling effect under the tree species such as linden or less water demanding species need to be found.  On the other hand, for paved surfaces better cooling from the dense shade of linden trees are more effective.

As Mohammad Rahman summarized: “On very hot days, city dwellers have a cooler time on grass lawns under trees with a less dense crown and a lower water requirement.” 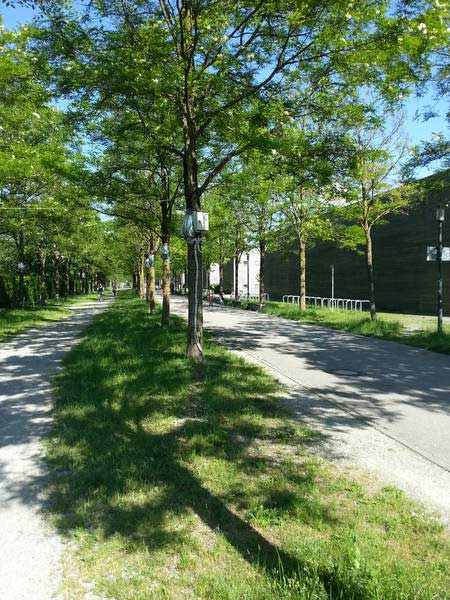