The global average surface temperature in 2015 is likely to be the warmest on record and to reach the symbolic and significant milestone of 1° Celsius above the pre-industrial era. This is due to a combination of a strong El Niño and human-induced global warming, according to the World Meteorological Organization (WMO).

The years 2011-2015 have been the warmest five-year period on record, with many extreme weather events – especially heatwaves – influenced by climate change, according to a WMO five-year analysis.

“The state of the global climate in 2015 will make history as for a number of reasons,” said WMO Secretary-General Michel Jarraud. “Levels of greenhouse gases in the atmosphere reached new highs and in the Northern hemisphere spring 2015 the three-month global average concentration of CO2 crossed the 400 parts per million barrier for the first time. 2015 is likely to be the hottest year on record, with ocean surface temperatures at the highest level since measurements began.  It is probable that the 1°C Celsius threshold will be crossed,” said Mr Jarraud. “This is all bad news for the planet.”

Greenhouse gas emissions, which are causing climate change, can be controlled. We have the knowledge and the tools to act. We have a choice. Future generations will not.”

“Added to that, we are witnessing a powerful El Niño event, which is still gaining in strength. This is influencing weather patterns in many parts of the world and fuelled an exceptionally warm October. The overall warming impact of this El Niño is expected to continue into 2016,” said Mr Jarraud.

WMO issued its provisional statement on the status of the climate in 2015, and an additional five-year analysis for 2011-2015, to inform negotiations at the U.N. Climate Change Conference in Paris.

A preliminary estimate based on data from January to October shows that the global average surface temperature for 2015 so far was around 0.73 °C above the 1961-1990 average of 14.0°C and approximately 1°C above the pre-industrial 1880-1899 period.

This temperature tendency indicates that 2015 will very likely be the warmest year on record. The global average sea-surface temperature, which set a record last year, is likely to equal or surpass that record in 2015. The global average temperatures over land areas only from January to October suggest that 2015 is also set to be one of the warmest years on record over land. South America is having its hottest year on record, as is Asia (similar to 2007), and Africa and Europe their second hottest.

According to preliminary figures as of the end of September 2015, 2011-15 was the world’s warmest five-year period on record, at about 0.57°C (1.01°F) above the average for the standard 1961-90 reference period. It was the warmest five-year period on record for Asia, Europe, South America and Oceania, and for North America. WMO compiled the five-year analysis because it provides a longer-term climate signal than the annual report.

The full effect of the strong 2015 El Niño on global temperature is likely to continue after El Niño peaks. However, other impacts are already being felt.  In early October, NOAA declared that record global ocean temperatures had led to a global coral bleaching event. This began in the North Pacific in the summer of 2014 and spread to the South Pacific and Indian Ocean in 2015.

Consistent with typical El Niño impacts, large areas of Central America and the Caribbean recorded below average rainfall. Brazil, which started the year in drought in southern and eastern areas, saw the focus of the drought shift north with scant rainfall during the dry season over the Amazon. India’s monsoon rainfall was 86% of normal. In Indonesia, the low rainfall has likely contributed to the increased incidence of wildfires. Peru was affected by heavy rain and flooding, as was Argentina.

The oceans have been absorbing more than 90% of the energy that has accumulated in the climate system from human emissions of greenhouse gases, resulting in higher temperatures and sea levels. In the first nine months of 2015, global ocean heat content through both the upper 700 meters and 2000 meters of the oceans reached record high levels. The latest estimates of global sea level indicate that the global average sea level in the first half of 2015 was the highest since satellite observations became available in 1993.

Significant warmer than average temperatures were recorded over the majority of observed land areas, especially western North America, large areas of South America, Africa and southern and eastern Eurasia. China had its warmest January-to-October period on record. For the continent of Africa, 2015 currently ranks as the second warmest year on record. Australia had its warmest October on record and a heatwave early in the month set new records for early season warmth.

One notably cold area was the Antarctic, where a strong anomaly in atmospheric patterns known as the Southern Annular Mode lasted for several months. Eastern areas of north America were colder than average during the year, but none were record cold. After a warm January to September, Argentina experienced its coldest October on record.

Heatwaves affected Europe, northern Africa and the Middle East through the late spring and summer, with many new temperature records set. In May, high temperatures affected Burkina Faso, Niger and Morocco. Spain and Portugal also saw unusually high temperatures. July brought heat waves to a large area from Denmark in the north, to Morocco in the south and Iran in the east. In early August, Jordan experienced a heatwave, whilst Wroclaw (Poland) experienced an all-time high temperature of 38.9°C on the 8th August. The heat continued into September, shifting further into Eastern Europe.

During the spring of 2015 in South Africa, record high temperatures were exceeded on a regular basis.

March in Chile saw unusually heavy rains which caused flooding and mudslides. In August, heavy rain in the Buenos Aires province of Argentina saw several monthly and daily rainfall records broken during the month. Mexico had its wettest March on record (since 1941). It was the wettest May on record for the contiguous USA and the wettest month overall in 121 years of record keeping. Between May and October, China experienced 35 heavy rain events. Subsequent flooding affected 75 million people with estimated economic losses of 25 billion dollars.

Long-term rainfall patterns can disguise great variability in short-term totals. There were many instances in 2015 of 24-hour totals exceeding the normal monthly mean. For instance, the Moroccan city of Marrakech received 35.9mm of rain in one hour in August, over 13 times the monthly normal. In Pakistan during the monsoon, one station recorded 540mm of rain in 24 hours; the annual normal is 336mm.

Dry areas included Central America and the Caribbean, northeast South America including Brazil, parts of central Europe and Russia, parts of Southeast Asia, Indonesia and southern Africa. In Western North America, long-term drought conditions continued. Basins across the west depend on snowpack as a water resource. On April 1, the snow water equivalent was 5% of normal.

The dry and warm conditions observed across much of the western USA during the year favoured the development of wildfires. In Alaska, over 400 fires burned 728,000 hectares in May, breaking the previous record of 216 fires and 445,000 hectares. Over 700 wildfires were reported in Alaska during July, burning nearly 2 million hectares during the summer. Large fires burned throughout the Northwest in August and Washington State suffered its largest fire on record.

Globally, a total of 84 tropical storms formed between the start of the year and 10 November, compared to the 1981-2010 annual average of 85. Hurricane Patricia which made landfall in Mexico on 24 October was the strongest hurricane on record in either the Atlantic or eastern North Pacific basins, with maximum sustained wind speeds of 320 km/hour. In the Northwest Pacific basin, 25 named storms were recorded. Six typhoons made landfall over China, with three leading to combined estimated economic losses of 8 billion dollars.

The South Pacific saw 9 named storms. Tropical cyclone Pam made landfall over Vanuatu as a category 5 cyclone on 13 March destroying many homes.

Since consistent satellite records began in the late 1970s, there has been a general decline in Arctic sea ice extent throughout the seasonal cycle. In 2015, the daily maximum extent, which occurred on 25th February 2015, was the lowest on record at 14.54 million km2. The minimum sea ice extent was on 11th September when the extent was 4.41 million km2, the fourth lowest in the satellite record.

Scientific assessments have found that many extreme events in the 2011-15 period, especially those relating to extreme high temperatures, have had their probabilities over a particular time period substantially increased as a result of human-induced climate change – by a factor of 10 or more in some cases.

Of 79 studies published by Bulletin of the American Meteorological Society between 2011 and 2014, more than half found that anthropogenic climate change contributed to extreme events. The most consistent influence has been on extreme heat, with some studies finding that the probability of the observed event has increased by 10 times or more.

Examples include the record high seasonal and annual temperatures in the United States in 2012 and in Australia in 2013, hot summers in eastern Asia and western Europe in 2013, heatwaves in spring and autumn 2014 in Australia, record annual warmth in Europe in 2014, and the Argentine heatwave of December 2013.

Some longer-term events, which have not yet been the subject of formal attribution studies, are consistent with projections of near- and long-term climate change. These include increased incidence of multi-year drought in the subtropics, as manifested in the 2011-15 period in the southern United States, parts of southern Australia and, towards the end of the period, southern Africa. There have also been events, such as the unusually prolonged, intense and hot dry seasons in the Amazon basin of Brazil in both 2014 and 2015 which, while they cannot yet be stated with confidence to be part of a long-term trend, are of considerable concern in the context of potential “tipping points” in the climate system as identified by the Intergovernmental Panel on Climate Change. 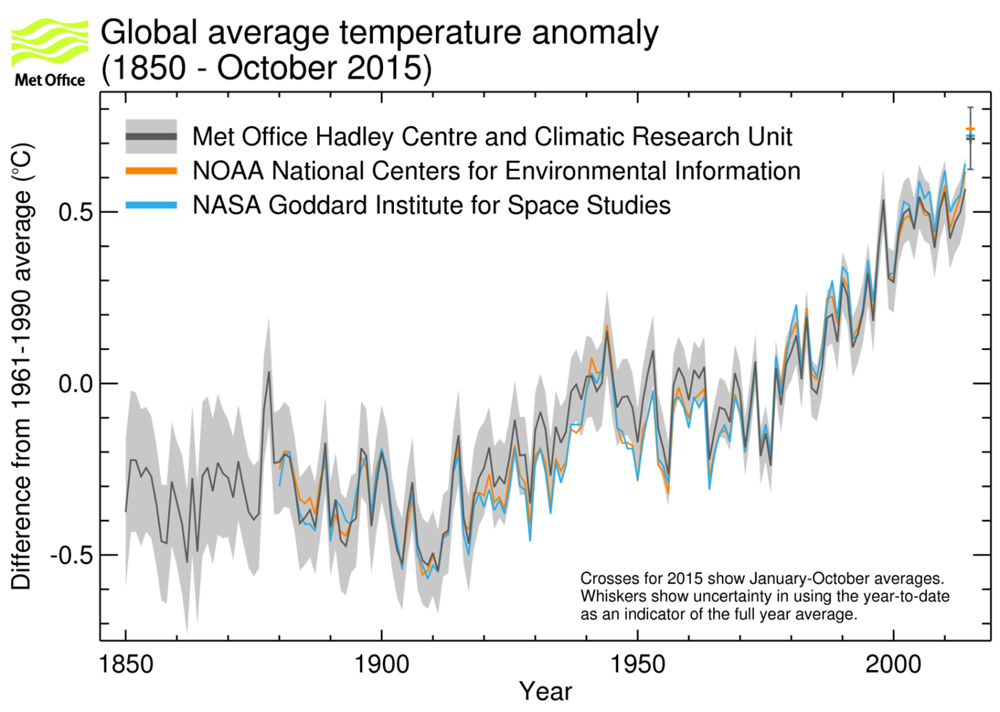 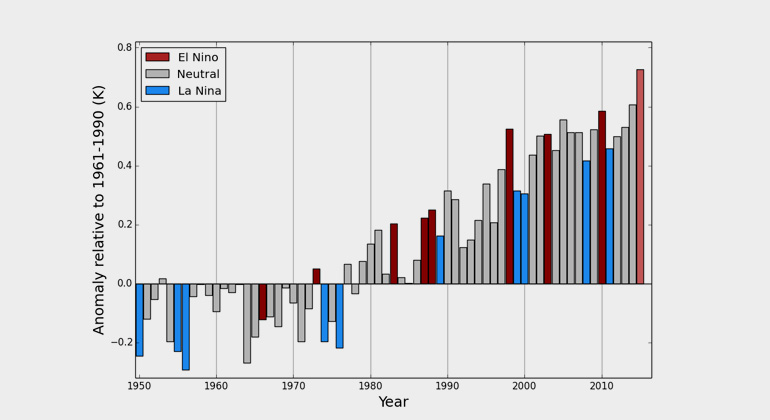 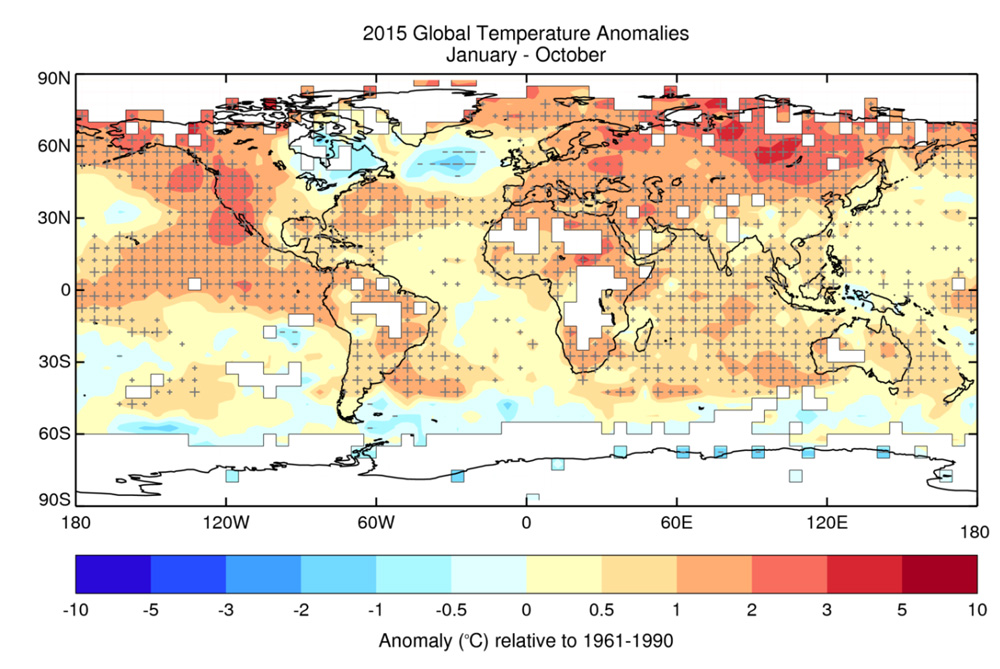 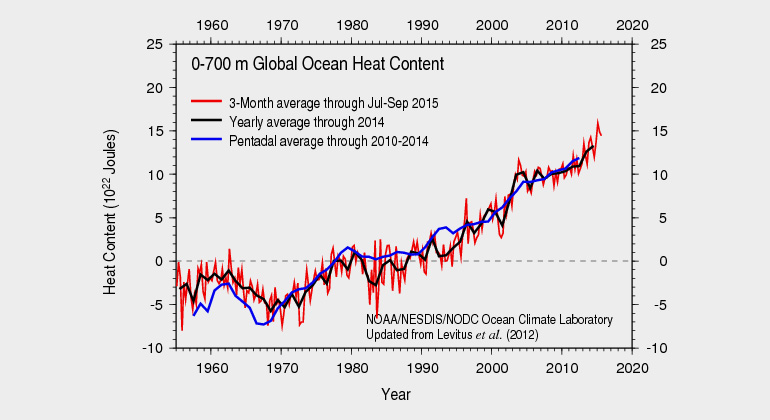 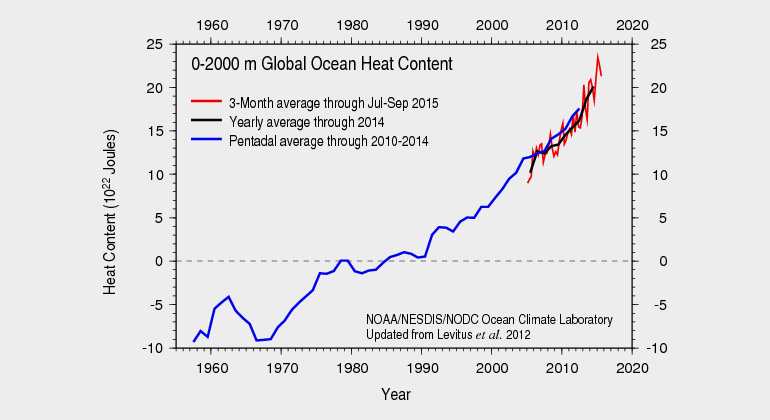