At least 770,000 children in the Kasai region in the Democratic Republic of Congo are suffering from acute malnutrition, including 400,000 children who are severely malnourished and at risk of death – UNICEF said in a report released today. The children’s agency went on to warn that unless urgent action was taken to strengthen the humanitarian response, the number of child deaths could skyrocket.

Since 2016 when violent conflict erupted in Kasai, hundreds of thousands of people have been driven from their homes and communities. Despite a lull in the fighting, some 3.8 million people, including 2.3 million children, are in need of humanitarian assistance.

“Conflict and displacement continue to have devastating consequences for the children of Kasai,” said UNICEF Deputy Executive Director Fatoumata Ndiaye, back from a mission in the Kasai-region. “Thousands of displaced children have spent months without access to the services they need – like health care, safe drinking water and education – and their wellbeing has suffered tremendously. Now that access is improving, the Government and the humanitarian partners, with support from the international community, must ramp up lifesaving interventions for children before it’s too late.”

Food insecurity in Kasai has been compounded by a sharp drop in land productivity linked to displacement, according to the report, Kasai: A children’s crisis. Many families driven from their homes have been unable to plant and harvest their crops, causing levels of malnutrition to rise. In some areas, three crop seasons were missed.

Additional findings from the report include:

• One in 10 children in Kasai is suffering from severe acute malnutrition;
• More than 200 health centres were looted, burnt or destroyed during the conflict;
• More than 400 schools were attacked or used for military purposes and 100 schools were destroyed;
• 440,000 children were unable to finish their school year in 2017;
• Thousands of children were recruited into armed groups and militias;
• 60 per cent of the region’s militia are children;
• Immunization schedules for children were interrupted by the violence and the region is now facing outbreaks of cholera and measles.

“Now that people are returning to their communities, thousands of children can be newly reached with humanitarian assistance. Since early 2017, UNICEF and its partners have provided care for 71,500 children suffering from severe acute malnutrition”, said Gianfranco Rotigliano, UNICEF-Representative in the Democratic Republic of Congo. UNICEF is intensifying the distribution of therapeutic food to health centers and hospitals for the treatment of malnourished children and is scaling up its training activities for community health workers to promote best nutritional practices.

Recovering from the violence is also dependent on family reintegration and schooling for children who have been associated with militias. UNICEF and its partners have so far secured the release of more than 1,700 children from militias, and provided them with psychosocial support and help in reintegrating their communities. UNICEF has also set up and rehabilitated 314 classrooms in the Kasai region to help get children back into the classroom.

To fund its programs for the children of Kasai in 2018, UNICEF has appealed for US $88 million. 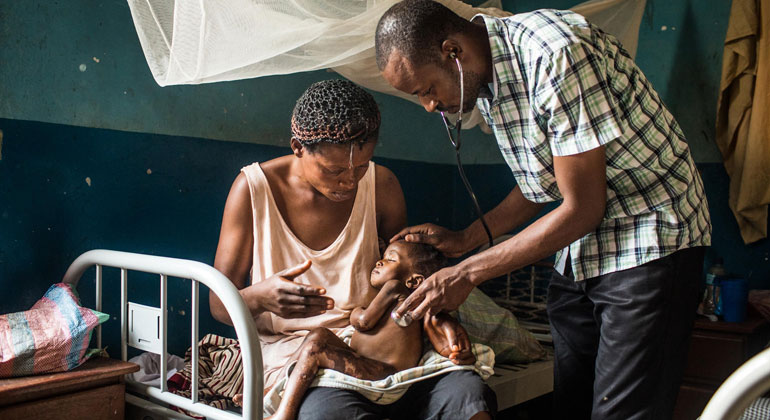