With the historic Paris Agreement having recently entered into force, this year’s Climate Change Performance Index (CCPI) 2017 confirms a boost for renewable energy and positive developments in energy efficiency. While these encouraging trends are happening on a global scale, the necessary energy revolution is still happening too slowly. Jan Burck, Germanwatch, key author of the CCPI comments: “The conditions for a global energy revolution have never been better. Due to the falling costs of renewable energy and efficiency technologies, national governments have no more excuses not to enshrine the Paris Agreement into national law. Besides the vast development of renewable energy, we see positive signals that fossil fuels increasingly are put on the defence. So far, falling oil prices did not cause an increase in demand for the energy source while a growing number of countries are starting to turn their backs on coal.”

On the policy-side, the CCPI still tracks a lack of ambition in many countries but some are catching up this year.

Morocco (rank 8), this year’s host of COP22 continued its upward trend in the CCPI 2017. With massive investments in renewable energy and ambitious mid- and long-term targets, Morocco is a frontrunner in Africa.
Positive trends are seen as well among emerging economies of the G20 like India (rank 20), Argentina (rank 36) and Brazil (40) which all improved their ranking in the CCPI 2017.

Still no big emitter is acting in line with the 1.5-2°C limit, therefore the first three ranks are left empty. France on rank 4 is leading the tableau for the first time, profiting from the exceptional diplomacy enabling the Paris Agreement last year. Sweden (5) and the United Kingdom (6) both benefit from promising climate policies established by former governments.

“This year’s CCPI confirms that many EU countries, including the UK, Sweden, Denmark and Germany risk losing their leading role in renewable energy development. Several EU Member States cut back on investments in renewable energy and energy efficiency, questioned agreed long-term mitigation targets or failed to set the necessary policy frame work to deliver on their short-term goals. It will only be a matter of time before they lose the leading positions in the CCPI”, says Wendel Trio, Director of Climate Action Network (CAN) Europe. “Denmark, the index leader of the last four years, is already experiencing the consequences of its turn-around in climate policy with a dramatic drop in the ranking to place 13 this year. Emerging economies are catching up in the progress of transitioning their energy systems and EU countries have to raise ambition if they want to uphold leading positions”, Wendel Trio adds. “EU Member States soon have an opportunity to change gears by ensuring new policies on renewable energy and energy efficiency will go well beyond the weak proposals the European Commission is currently developing. This will be the litmus test for Europe’s transition.”

Canada (55), Australia (57) and Japan (60) are in the bottom group (rated “very poor”) of the index. Japan once again dropped two places as national experts criticize their government for a very poor climate policy. Australia dropped in energy efficiency and is criticized for unambitious climate policies of the national government. The performance of the world’s two largest emitters, USA (43) and China (48), is still rated “poor” in the CCPI. The United States lost some ground in almost every Index category and as a result dropped several places. The election results in the USA might pose risks to the speed of the ongoing transition. The election of Donald Trump as president has however not yet had any influence on the policy evaluation presented in CCPI 2017. Despite China being rated “poor”, positive developments are seen thanks to shrinking consumption of coal globally, which resulted in China stopping the construction of 30 coal fired power plants the last year.

“The global transition to a low carbon economy is clearly undergoing and gaining speed. However, some countries are still performing badly and even going backwards. As we now move to the implementation phase of the Paris Agreement, all countries must translate its objectives into ambitious national policies and long-term decarbonisation plans”, Jan Burck says.

About CCPI:
The CCPI is a tool designed to enhance transparency in international climate politics. On the basis of standardised criteria, the Index evaluates and compares the climate protection performance of 58 countries that are together responsible for more than 90% of global energy-related CO2 emissions. The first three ranks are left free because up to now no country is acting enough to prevent dangerous climate change. Denmark could have been the first country to enter the top 3, if it had not been for the recent turn around in climate policies. (More about the methodology can be found in the brochure “The Climate Change Performance Index – Background and Methodology”). 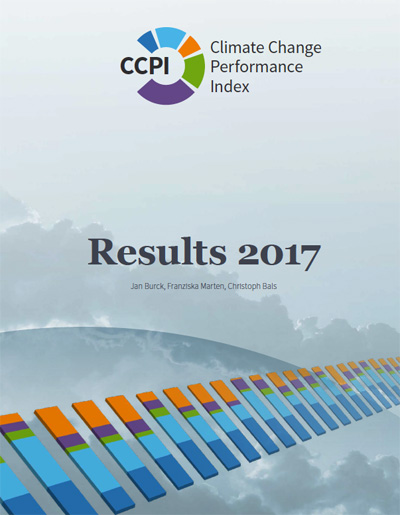 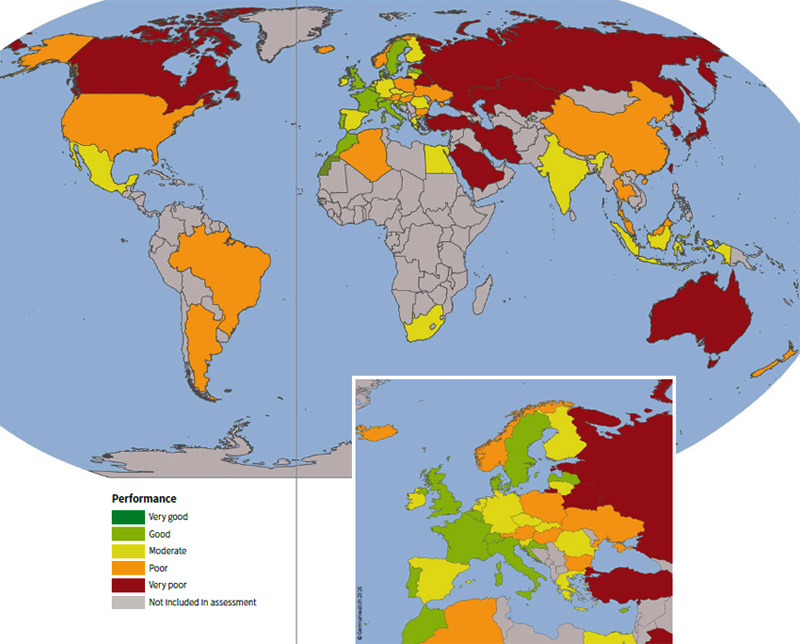