Serbia, Afghanistan and Bosnia and Herzegovina were the countries most impacted by climatic events in 2014. This is the result of this year’s Global Climate Risk Index, launched today by Germanwatch at the climate summit in Paris. “Heavy rains, flooding and landslides have been the defining hazards of the new Global Climate Risk Index”, said Sönke Kreft, author of the study and Team Leader for International Climate Policy at Germanwatch. “Patterns of extreme precipitation is what people and countries will likely face in a warming climate.”

“It was the poorhouse of Europe that was the worst hit last year”, said Kreft. That the majority of impacts from floods, storms and heat waves are borne by poor countries, is also highlighted in the Index’s long-term finding. Kreft: “Climate related impacts are unfair. Nine out of ten most affected countries in the period 1995-2014 are among the ‘low’ or ‘lower-middle’ income countries, with the most impacted being Honduras, Myanmar and Haiti.”

Some countries are being repeatedly battered by extreme climatic events. Pakistan has now been in the ‘Bottom Ten’ for five consecutive years, while the Philippines were among the ten most impacted countries seven times in the last decade.

“Constant calamities from storms and floods take a heavy toll on the Philippines”, said Raymund E. Liboro, representative of the Philippines commenting on the index’ results. “We realised that climate change is the defining challenge for our people and the planet. That’s why we brokered the Declaration of the Climate Vulnerable Forum – a statement of a group of countries to inject urgency and morality into the climate talks.” Kreft adds: “Our index results are a reminder that the Paris climate summit needs to achieve the climate ambition and global solidarity required to safeguard vulnerable population worldwide.” 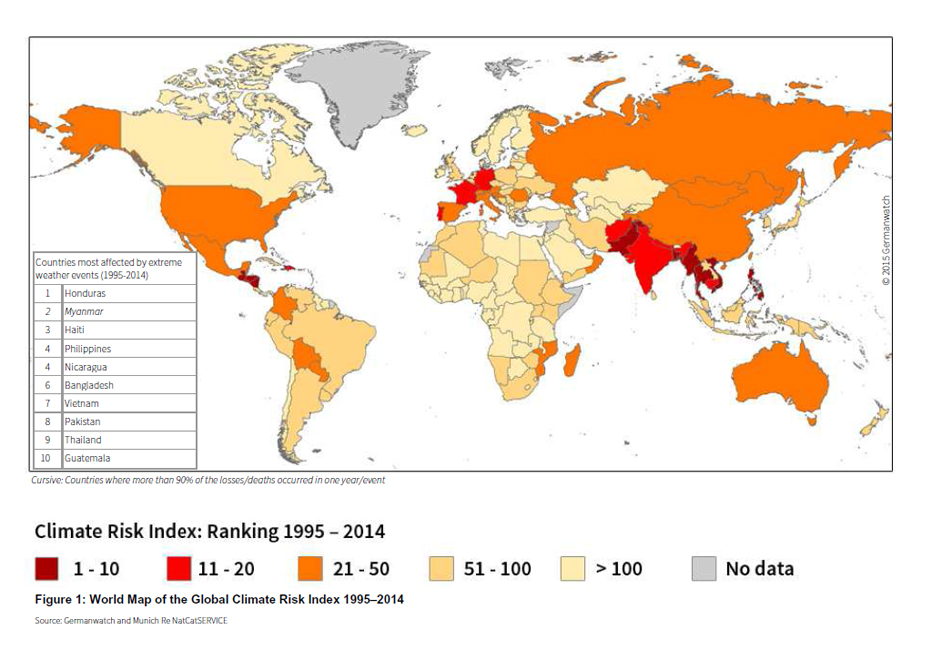