Global peacefulness improves for the first time in five years but world remains less peaceful than adecade ago.

The 13thedition of the annual Global Peace Index(GPI) report, the world’s leading measure of global peacefulness, revealsthat theaverage level of global peacefulness improvedfor the first time in five years.However, despite improvement, the world remains considerably less peaceful now than a decade ago, with the average level of peacefulness deteriorating by nearly 4per cent since 2008.This year’s report includes new researchon the possible effects of climate change on peace.

Eighty-sixcountries improved their score in the 2019 report,whilst76 deteriorated.Iceland remains the most peaceful country in the world, a position it has held since 2008. It is joined at the top of the index by New Zealand, Austria, Portugal, and Denmark. Bhutan has recorded the largest improvement of any country in the top 20, rising 43 places in the last 12 years.

Produced by the international think-tank the Institute for Economics &Peace(IEP), the GPI report presents the most comprehensive data-driven analysis to-date on peace, its economic value, trends, and how to develop peaceful societies. The report covers 99.7 per cent of the world’s population and uses 23 qualitative and quantitative indicators from highly respected sources to compile the index. These indicators are grouped into three key domains: Ongoing Conflict, Safety and Security, and Militarisation.

Steve Killelea, Founder and Executive Chairman of the IEP, said: “Although peace has improved in the 2019 GPI,a deeper analysis finds a mixture of positive and negative trends.Whilsttheconflicts that have dominatedthe past decade, such asinIraq and Syria,have begun to abate, new conflicts have emergedin Yemen, Nicaragua and Turkey,resulting inthe bottom ten countries in the index declining by more than the global average–increasing the global inequality inpeace.”

Four of the nine regions in the world became more peaceful over the past year. The largestincrease in peacefulness occurred in the Russia and Eurasia region, followed by the Middle East and North Africa. In both regions, the number of deaths from conflictdeclined in Ukraine and Syria respectively. The fall in conflict deaths has been mirrored by a fall in deaths from terrorism.

Two of the three GPI domains deteriorated over the past decade, with Ongoing Conflict deteriorating by 8.7per cent and Safety and Security deteriorating by 4 per cent. However, contrary to public perception, the Militarisation domain has recorded a 2.6 per cent improvement since 2008. The number of armed services personnel per 100,000 people has fallen in 117 countries, and military expenditure as a percentage of GDP fell in 98 countries, with only 63 countries increasing their spending.

The report also analysesthe security risks posed by climate change. Analsysisin the report finds that an estimated 971 million people live in areas with high or very high exposure to climate hazards, with 400 million of these people living in countries with low levels of peace. Ten per centof these people, or 103.7 million,are living in areas of countries ranked in the bottom 25 countries onthe GPI: South Sudan, Iraq, Libya, the Democratic Republic of the Congo, Sudan, North Korea, Nigeria and Mexico.

The economic impact of violence on the global economyin 2018 decreased for the first time since 2012, decreasingby 3.3 per cent, to$14.1 trillion.This figure is equivalent to 11.2 per cent of the world’s economic activity or $1,853 perperson. The largestimprovement was in armed conflict, owing to a fall in the intensity of conflict in Syria, Colombia and Ukraine. There was also a substantial reduction in the economic impact of terrorism, which fell by 48 per cent from 2017 to 2018.Forthe ten countries most affected by violence, the average impact was equivalent to 35 per cent of their GDP, compared to just 3.3 per cent in the world’s most peaceful countries. Syriasuffered the worst at 67 percent. 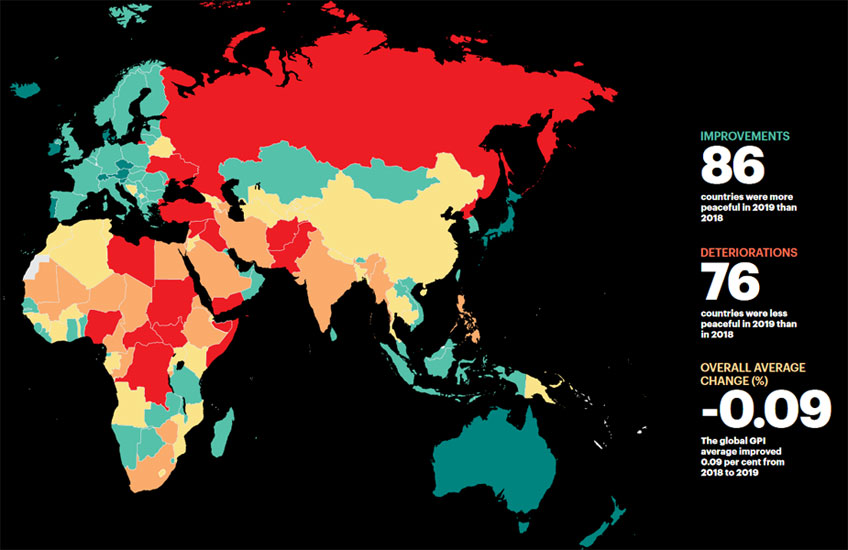 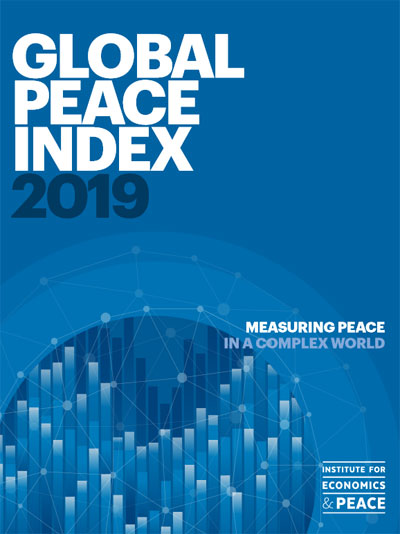 Institute for Economics and Peace 2019