Global energy transition taking up speed – but no country is doing enough / Countries have to strengthen targets and implementation / Sweden, Lithuania, Morocco and Norway leading the table – USA in free fall

After a decade of rapid growth, we see a strong decrease in the growth rates of global CO2 emissions over the past years, sending signals for a decarbonisation of the global energy system. The Climate Change Performance Index 2018 (CCPI), published today at COP23 in Bonn, confirms these developments in Greenhouse-Gas-emissions (GHG), renewable energies and energy use for some countries but also still clearly shows a current general lack of ambitious targets and sufficient implementation for a Paris-compatible pathway. Jan Burck, co-author of the CCPI at Germanwatch, comments: “We see a strong commitment to the global climate targets of the Paris Agreement in international climate diplomacy. The countries now have to deliver specific measures breaking down their commitments to a sectoral level.”

“We continue to see very positive developments regarding renewables and energy efficiency”, Stephan Singer from the Climate Action Network (CAN) and co-publisher of the CCPI, adds. “The data show encouraging growth in renewable energy, ever cheaper prices for solar and wind energy, and successes in saving energy in many countries. This was responsible for stabilising global energy CO2 emissions in the last three years. But progress is achieved much too slow for a fully renewable energy based world economy in a few decades, because growing oil and gas consumption is higher than the welcomed reduction in coal use.”

“The gap in mid- and long-term ambition of the evaluated countries is still too high. In terms of GHG emissions, we see better 2030 targets in countries like Sweden, Norway, or India; comparably good targets for renewable energy, we see in for example Italy, Norway, Sweden or New Zealand. No country has a particularly outstanding energy efficiency target. Korea, Saudi Arabia, and the United States generally have to drastically raise their 2030 ambition”, Prof. Niklas Höhne from the NewClimate Institute, co-author of the CCPI, explains.

With comparably positive developments in renewables and per capita emissions, Sweden ranks 4th in this year’s CCPI – following the empty top three. A relatively low emissions level and a very high trend in renewable energy are reasons for Lithuania’s 5th rank. Profiting from a good policy evaluation and relatively high 2030 targets, Morocco lands on position six, followed by Norway. India ranks 14th with still low levels of per capita emissions and energy use. China however, with its high emissions and a growing energy use over the past five years, still ranks 41st. But better placements in the years ahead can be expected, as national experts have highlighted that the country has implemented policies to phase out coal capacity as well as promoting renewables and and electric mobility.

Germany (rank 22), the co-host country for Fiji’s COP 23 Presidency, lands in the midfield of the CCPI 2018. The country has put a lot of effort into international climate diplomacy and globally committing to climate action. “Germany’s mid- and long-term targets are relatively strong but the last government failed on delivering concreate measures to effectively reduce emissions domestically. Germany shows a relatively good development of renewable energy in the electricity sector but the country is not at all on track to meet its 2020 target. It is absolutely crucial that the currently ongoing coalition negotiations come to an agreement on a coal phase out and getting a transition in the transport sector started”, Burck says.

Wendel Trio, Director of Climate Action Network (CAN) Europe, comments on the performance of the EU, which was evaluated in the CCPI 2018 for the first time: “The report reveals that the EU vows commitment to the Paris Agreement, but avoids real climate action at home. The EU needs to translate words into action and commit to deeper emission cuts than currently foreseen. Current discussions on the new clean energy policies and the EU budget offer excellent opportunities to increase ambition of the bloc’s climate action.”

Having declared its withdrawal from the Paris Agreement and dismantled major climate legislation of the previous government, the USA (rank 56) finds itself in the bottom five of the ranking. Besides a very low policy evaluation, the country’s emissions level and energy use are considerably too high to be in line with a well-below 2°C pathway. The bottom three of the index is formed by Korea (rank 58), Iran (rank 59) and Saudi Arabia (rank 60), all of which are showing hardly any progress or ambition in reducing its emissions and energy use.

About the Climate Change Performance Index 2018, developed by Germanwatch and the NewClimate Institute:
The Climate Change Performance Index by Germanwatch and the NewClimate Institute is a ranking of the 56 countries and the EU, together responsible for about 90% of global GHG emissions. The methodology was improved for the 2018 edition. The four categories examined are: emissions (40%), renewable energy (20%), energy use (20%) and climate policy (20%). The latter is based on expert assessments by NGOs and think tanks from the respective countries. One of the major achievements is that the CCPI now also evaluates to what extent the respective countries are taking adequate action within the categories emissions, renewables and energy use to being on track towards the global Paris-goal of limiting global warming to well below 2°C. 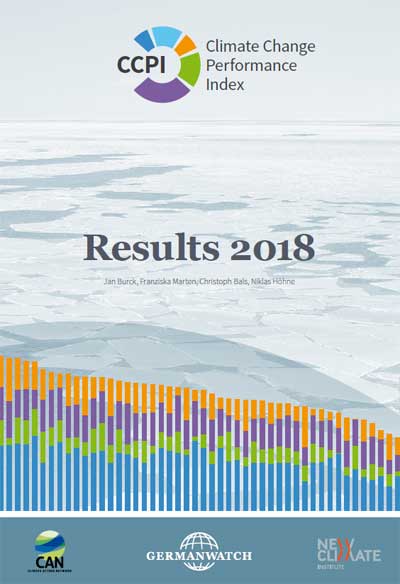