Organizers are heralding today’s Peoples Climate March as a huge success, with over 200,000 people participating in Washington, D.C., and tens of thousands more taking part at over 370 sister marches across the country.

In the United States, tens of thousands more took to the streets at hundreds of events in nearly all 50 states, from the town of Dutch Harbor in Alaska’s Aleutian Islands to the streets of Miami, Denver, Los Angeles, Chicago and other major American cities. Early counts estimated that more than 50,000 people took place nationwide.

“This march grew out of the relationship building among some of the country’s most important progressive organizations and movements,” said Paul Getsos, National Coordinator for the Peoples Climate Movement. “In 2014, the march was planned as a singular moment to pressure global leaders to act on climate change. There was a simple demand – act. This march was planned before the election as a strategic moment to continue to build power to move our leaders to act on climate while creating family-sustaining jobs, investing in frontline and indigenous communities and protecting workers who will be impacted by the transition to a new clean and renewable energy economy.”

In Washington, the march topped 200,000 people at it’s peak, far outpacing the National Park Service’s permitted space for 100,000 people. The march extended for over 20 blocks down Pennsylvania, with tens of thousands more surging along the mall to push back on the Trump administration’s policies and stand up for “climate, jobs and justice.”

“The solidarity that exists between all of us is the key to having a strong, fair economy and a clean, safe environment,” said Kim Glas, Executive Director, BlueGreen Alliance. “We can tackle climate change in a way that will ensure all Americans have the opportunity to prosper with quality jobs and live in neighborhoods where they can breathe their air and drink their water. Together we will build a clean economy that leaves no one behind.”

The day’s activities in D.C. began at sunrise with a water ceremony led by Indigenous peoples at the Capitol Reflecting Pool. Participants included Cheyenne River Sioux tribal members who traveled 1,536 miles by bus from Eagle Bend, SD to attend the ceremonies.

At an opening press conference, representatives from front line communities spoke about the impact that climate change and pollution were already having on their lives and called out the Trump administration for worsening the crisis. They called for a new renewable energy economy that created good paying, union jobs, and prioritized low-income and people of color communities.

The march began at 12:30 PM EDT and was led by young people of color from Washington, D.C. and Indigenous leaders from across the country. Tens of thousands of marchers headed up Pennsylvania Avenue in creatively named contingents, like “Protectors of Justice,” “Reshapers of Power,” and “Many Struggles, One Home.”

“When our communities are most threatened by climate; the solutions we build must allow us to have control of our resources and the energy we produce in an equitable and truly democratic way,” said Angela Adrar, Executive Director, Climate Justice Alliance. “They must create meaningful work that allows people to grow and develop to their fullest capacity. They must allow us to retain culture and traditions from our ancestors and give us the freedom of self-determination we so deserve so that we can thrive. This does not come easy and it must come with resistance and visionary opposition. Our existence depends on it.”

Art played a central role in the organizing of the mobilization and was on full display during the march. Dozens of giant parachute banners filled the streets, while puppets danced overhead. Some contingents carried sunflowers, a symbol of the climate justice community, while others simply raised their fists in resistance.

By 2:00 PM EDT, organizers had succeeded in their goal of completely surrounding the White House. Marchers sat down in the streets in a silent sit-in to recognize the damage caused by the Trump administration over the last 100 days and those who are losing their lives to the climate crisis.

They then created a movement heartbeat, tapping out a rhythm on their chests while drummers kept the time. The heartbeat was meant to show that while march participants came from many different backgrounds and communities, their hearts beat as one. It was a heartbeat of resistance, one that began with the Women’s March and will continue through the Peoples Climate March to May Day and beyond.

“Six months ago, my kids woke up to half a foot of water in our living room,” said Cherri Foytlin, director of BOLD Louisiana and spokesperson for the Indigenous Environmental Network. “Now, Trump wants to open up the Gulf Coast to even more offshore drilling. But we have a message for him: we are not afraid, and we will not stop fighting. With 100 and 500 year storms now coming every year, we are fighting for our lives.”

After the heartbeat, marchers rose up with a collective roar and continued down to the Washington Monument for a closing rally. Speakers at the rally celebrated the success of the day, while many marchers gathered in “Circles of Resistance,” some set up around their parachute banners, to talk about how to continue to build their movement.

As of 3:30 PM EDT in the afternoon, crowds of people still remained at the Monument while marches continued to take place across the country. The Peoples Climate Movement, a coalition of over 900 organizations representing many of the major social justice, labor and environmental groups in the country, has pledged to keep the momentum going after Saturday, from supporting the May Day marches on Monday to organizing at the local level.

“Today’s actions are not for one day or one week or one year,” said Getsos. “We are a movement that is getting stronger everyday for our families, our communities and our planet. To change everything, we need everyone.” 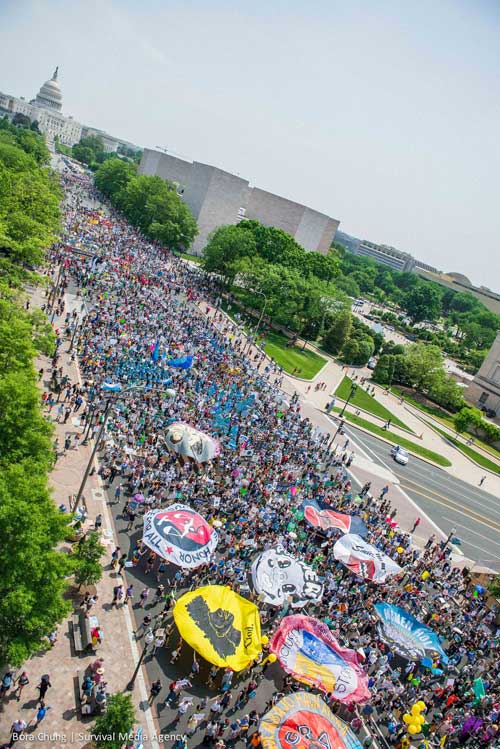