Global hunger levels have fallen more than a quarter since 2000, but more recent rising hunger scores of several countries in the 2017 Global Hunger Index underline how uneven this progress has been and how precarious it is to maintain. Famine has cast a shadow over four countries in the past year while conflict and climate change continue to hit the poorest the hardest. The Global Hunger Index this year indicates that beyond these acute crises, long term obstacles to reducing hunger in several countries may also be threatening efforts to reach zero hunger.

Nowhere is this more evident than in Africa south of the Sahara, where revised data place the Central African Republic in the “extremely alarming,” category – the first time a developing country has fallen into the report’s highest category since the 2014 report. The country has the same score today as it did in 2000, suggesting any progress made in recent years has been subsequently reversed. Several other countries including Sri Lanka, Mauritania, and Venezuela also have higher GHI scores in 2017 than in 2008, after witnessing falling scores in the previous two decades.

“The results of this year’s Global Hunger Index show that we cannot waiver in our resolve to reach the UN Sustainable Development Goal of zero hunger by 2030,” said Shenggen Fan, director general of the International Food Policy Institute. “We have made great progress toward that goal but indications that this progress is threatened emphasizes the need to establish resilience in food systems. We must provide immediate aid to those areas facing the most severe crises, such as famines, and construct policies at the international and national levels to address the structural issues that create persistent food insecurity.”

Amidst some very worrying data there is also some good news. The level of hunger in developing countries decreased by 27 percent since 2000. During the same period, GHI scores of 14 countries, including Senegal, Azerbaijan, Peru, Panama, Brazil and China improved by 50 percent or more. Angola, Ethiopia and Rwanda—each experienced violent conflict in recent decades—were among 72 countries which improved their GHI scores between 25 and 49.9 percent, making progress from “extremely alarming” levels to “serious levels”.

Declines in average hunger at the regional or national levels obscure some grim realities though. The averages can mask lagging areas where millions are still hungry, demonstrating the need to hold governments accountable not only for investments in timely data but also for building resilience in communities at risk for disruption to their food systems from weather shocks or conflict.

“Conflict and climate related shocks are at the heart of this problem. We must build the resilience of communities on the ground, but we must also bolster public and political solidarity internationally. The world needs to act as one community with the shared goal of ensuring not a single child goes to bed hungry each night and no-one is left behind,” said Concern Worldwide CEO Dominic MacSorley.

The Near East region, for example, has an average score at a “moderate” hunger level, but there are deep inequities within the region: Yemen, for example, has the sixth highest GHI score at an “Alarming” 36.1. Other places highlight inequality within countries. In Nigeria, an overall hunger level at a “Serious” 25.5 does not fully reflect the wide inequality within its borders: child stunting—an indicator of child undernutrition—ranges from 7.6 percent to 63.4 percent by region. Latin America’s “low” hunger scores do not tell the story of Venezuela, where political turmoil and ensuing food riots caused hunger to rise by 40 percent from 2008 levels, pushing the country into ‘moderate’ from ‘low’ levels of hunger.

“Women often do not have the same access to food although they take over the main responsibility for family meals. They need greater participation and their voices need to be heard in local and national decisions on food policy. This also applies to other vulnerable groups who cannot influence developments and debates on nutrition in their countries,” said Bärbel Dieckmann, President of Welthungerhilfe.

Efforts to reduce malnutrition and end hunger are marred by lack of complete data for calculating index scores for 13 countries. Yet the countries with missing data may be the ones suffering most: 9 of these countries have indicators like stunting, wasting and child mortality that raise significant concern for having high hunger levels. Two of these countries (South Sudan and Somalia) were included in the UN’s declaration of famine and warning of risk of famine. Ongoing conflicts in many of these countries were a factor inhibiting the collection of data necessary for calculating GHI scores. 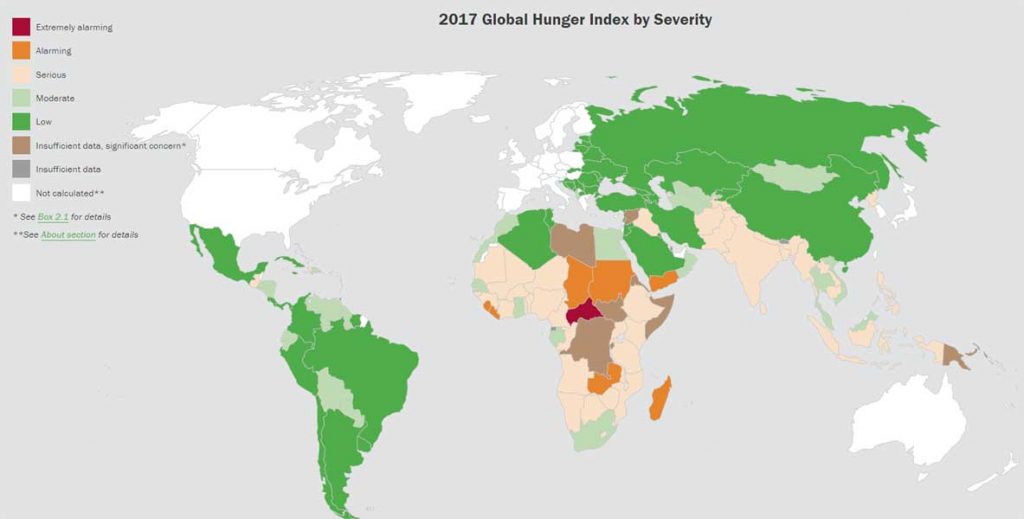