Political leaders willing to fight for human rights principles showed that they could limit authoritarian populist agendas, Human Rights Watch said today in its World Report 2018, reviewing events of the past year.

When combined with mobilized publics and effective multilateral actors, these leaders demonstrated that the rise of anti-rights governments is not inevitable.

In the 643-page World Report, its 28th edition, Human Rights Watch reviews human rights practices in more than 90 countries. In his introductory essay, Executive Director Kenneth Roth writes that when leaders push back strongly against politicians who demonize minorities, attack human rights, and undermine democratic institutions, they can limit the advance of populists. But where mainstream politicians capitulate to a message of hate and exclusion, the authoritarian populists flourish.

“The past year showed the importance of pushing back against the threat posed by demagogues and their abusive policies,” Roth said. “As we mark the 70th anniversary of the Universal Declaration of Human Rights in 2018, the best way to honor its principles is to vigorously defend them against those leaders who seek political advantage by depriving marginalized groups of the rights guaranteed for all.”

Roth said demagogues have used economic dislocation and inequality caused by globalization and technological advances, the fear of cultural shifts in an increasingly mobile world, and the threat of terrorist attacks to fuel xenophobia and Islamophobia. They launched a frontal assault on the values of inclusivity, tolerance, and respect that are at the heart of human rights. These authoritarian populists seek to replace democracy – elected government limited by rights and the rule of law – with their self-serving interpretation of what the majority desires.

France represented the most prominent example of successful resistance to xenophobic populism. In Austria and the Netherlands, by contrast, leaders of center-right parties competed by adopting xenophobic, anti-immigrant, and anti-Muslim positions, thereby mainstreaming abusive populist policies. President Emmanuel Macron took a different approach, embracing democratic principles and firmly opposing the National Front’s campaign of hatred against Muslims and immigrants. His resulting victory showed French voters reject overwhelmingly the National Front’s divisive policies. The challenge now for Macron is to govern according to the principles he preached. His first months in office showed a mixed record, both internationally and at home, with his counterterrorism policies and muted visit to China causes for concern.

The election of President Donald Trump in the United States and his anti-immigrant, racially divisive, and pro-drug-war policies were met with a broad reaffirmation of human rights and widespread resistance against such policies by popular organizations, civic groups, journalists, lawyers, judges, and even elected members of Trump’s own party.

In Central Europe, authoritarian populist governments have also encountered resistance. In Poland, large public protests and strong criticism from the European Union and Council of Europe met attempts to undermine the rule of law and judicial independence. In Hungary, the threat of EU legal action and international condemnation complicated the government’s plans to close Central European University, a bastion of independent thought that stands in opposition to the “illiberal democracy” championed by Prime Minister Viktor Orbán.

People also took to the streets to protest President Nicolás Maduro’s efforts to eviscerate Venezuela’s democracy and economy. Many Latin American countries shed their traditional reluctance to criticize a neighbor, raising the pressure for human rights reforms in Venezuela.

The Women’s March in the US morphed into a global phenomenon, with millions gathering in support of women’s rights. Even before the #MeToo movement, Canada made gender equality a central part of its aid programs, and France announced new measures to combat gender-based violence and sexual harassment. Tunisia, Jordan, and Lebanon repealed provisions allowing rapists to escape punishment by marrying their victims. The Dutch, Belgian, and Scandinavian governments led efforts to establish an international fund to replace anticipated US funding cuts to reproductive health programs, and Sweden pursued a feminist foreign policy.

By contrast, where governments repressed domestic resistance and international concern flagged, the populists and other anti-rights forces prospered, Roth said. President Recep Tayyip Erdoğan decimated Turkey’s democratic system as the EU focused largely instead on enlisting his help to stem the flight of refugees to Europe and security cooperation. President Abdel Fattah al-Sisi crushed public dissent in Egypt with little interference from the US or the EU, which accepted his claim that he was providing stability. In China, President Xi Jinping carried out an intense crackdown on independent voices with other nations afraid to jeopardize lucrative contracts by speaking out.

Roth warned about the retreat of governments that might champion human rights, including the US, a UK preoccupied with Brexit, and European countries grappling with the influence of xenophobic populists. Their hesitancy has left a vacuum in which mass atrocities proceeded, often unchecked, in countries such as Yemen, Syria, Burma, and South Sudan.

However, Roth noted that several small and medium-sized countries have jumped into the fray. When the major powers continued to support the abusive Saudi coalition in Yemen, where civilians pummeled by Saudi-led aerial attacks and a blockade faced cholera and acute malnutrition, the Netherlands stepped in to lead the demand for a UN investigation. Supported by Canada, Belgium, Ireland, and Luxembourg, they forced Saudi Arabia to accept an inquiry that will increase pressure for better behavior in the conflict. The Netherlands and Norway also imposed an arms embargo on Saudi Arabia and the United Arab Emirates, respectively.

Since Russia refuses to allow the UN Security Council to act for justice in Syria, Liechtenstein built a broad coalition in December 2016 to seek a resolution in the UN General Assembly. By a vote of 105 to 15, they established a mechanism to collect evidence and build cases for prosecution, an important commitment to see justice done for war crimes in Syria.

“The central lesson of the past year is that human rights can be protected from populist challenge,” Roth said. “What’s needed is a principled defense rather than surrender, a call to action rather than a cry of despair.” 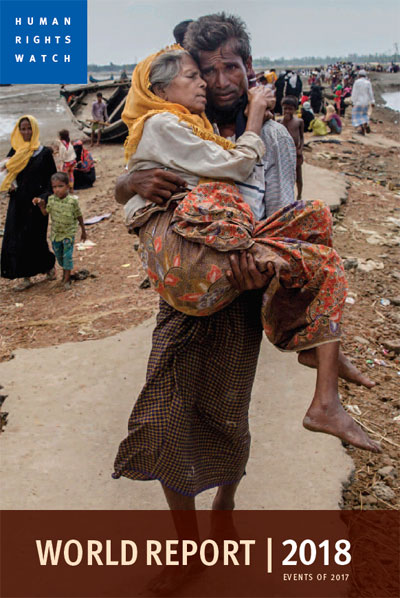