A new study undertaken by LEVC has shown that the quieter driving environment of an electrically-driven vehicle can have significant mental health benefits. The work, in conjunction with academics from the University of York, has been released during Mental Health Awareness Week (14-20 May) which is focused on stress and stress reduction, and shows that moving from driving diesel to electric vehicles improves mental well-being for commercial vehicle drivers.

In a world first, LEVC commissioned an experiment to monitor mental activity – among a host of other physical factors – of drivers in both the new electrically-driven taxi and previous diesel model to find out if the quiet cabin of the state-of-the-art electric vehicle had an effect on the wellbeing of hard-working taxi drivers.

The test was designed and executed by acoustics expert Dr Duncan Williams of the University of York and took place in central London with four professional cabbies taking to the wheel of both vehicles and undertaking a series of trial drives.

An electroencephalogram, often referred to as a ‘brain cap’, was placed on the head of each driver. Electrodes within the cap monitored brain activity over a set route through the capital, giving previously unseen insight into the differing mental states between drivers of electric and diesel vehicles. Heart rate and audio readings were also taken too.

Driving the electric taxi, cabbies were found to be:

More focussed than when driving the diesel vehicle

Calmer than when driving the diesel vehicle

Happier than when driving the diesel vehicle

All the drivers who took part in the study had already clocked up many miles in the electric TX taxi and were familiar with its controls and driving behaviour. 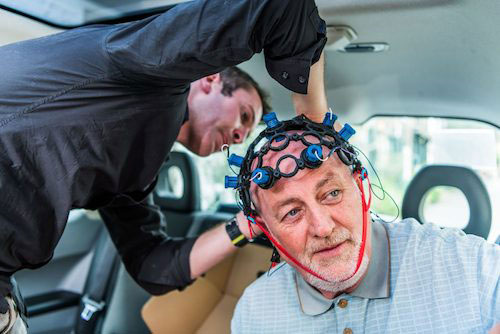