At a media frenzied event last March, electric car manufacturer, Tesla, unveiled its Model 3. Priced to compete with conventional fossil-fuelled vehicles, it attracted over 325,000 reservations within a week.

The hype built around this vehicle, and several other fast and slick electric cars, is but a symptom of a much larger and growing movement across the motor vehicle industry, to cut the transport sector’s oil addiction and switch to electric power.

Globally the stock of electric vehicles is on the rise, and in 2015 more than one million electric vehicles were on the road. That number grew to more than two million in 2016, with China, the US, and several European countries leading the way in uptake.

“There are many factors that have led to this surge in uptake. Strong technological progress, the implementation of policies, and cost reductions, particularly in batteries, have all played a part,” says Dolf Gielen, Director of IRENA’s Innovation and Technology Centre. “Despite on-going battery performance improvements and cost reductions, electric vehicles still face obstacles, and overcoming them will be key to getting electric vehicle adoption to move forward.”

“The public already perceives electric vehicles as providing an excellent driving experience, and new models being introduced this year and next, will have much greater driving range than most of today’s. But finding ways to encourage people to switch to electric, is still necessary,” says IRENA analyst Francisco Boshell. “Strong policies to reduce the cost of electric vehicles, provide driving and parking advantages, and ensure sufficient recharging infrastructure, will likely be needed for at least another five to ten years, to have a chance for rapid sales growth and to achieve target stock levels by 2030.”

In IRENA’s renewable energy transport roadmap, The Renewable Route to Sustainable Transport, the Agency estimates that there could be as many as 160 million electric vehicles on the road by 2030 (about 10% of the passenger car fleet). They would not just serve to lower levels of air pollution in cities, but also provide significant battery capacity in some markets to support variable renewable energy — like wind and solar — at significantly larger scale.

“Electric vehicles create a paradigm shift for both the transport and power sectors,” explains Boshell. “They can support variable renewable power growth through optimised charging schemes such as time-variable smart charging, and vehicle to grid electricity supply.”

Replacing conventional vehicles with electric ones comes with many benefits, including reduced noise pollution, and zero tailpipe emissions — meaning less local air pollution. Depending on the power generation of the city or region, electric vehicles can also lower carbon dioxide emissions and so play a role in averting climate change.

“Governments should also consider promoting electric two-wheelers and electric buses as a way of reducing pollution and noise in populated and urban regions,” says Nicholas Wagner, coordinator of IRENA’s transport analysis. Worldwide, the external costs of air pollution relating to the use of fuels in the transport sector were in the range of USD 460-2,400 billion in 2010, and this could increase 40 per cent by 2030.

Connecting electric vehicles to the grid expands ‘demand side management’ options — using smart grids to give customers control and make well-informed decisions on their consumption of electricity — that can help customers shift their electricity loads during peak periods. For residential consumers, demand side management enables them to be informed about when they can cheaply consume electricity, saving both energy and money.

For this reason, some countries are taking steps to increase the number of charging stations in their territory. In 2016, over 8,000 public and private charging stations were installed in Beijing, China. The city has plans to install 435,000 more by 2020.

Developing the methods and understanding for how to best charge, aggregate and control electric vehicle load on the grid, is still a fundamental and on-going issue, according to the report. But eventually smart-charging will be able to support distribution and grid management, and ultimately improve the operation of electric vehicles.

To learn more about sustainable solutions in the transport sector, IRENA is developing a transportation series that includes Biofuels for Aviation, Biogas for Road Vehicles and Renewable Energy Options for Shipping. 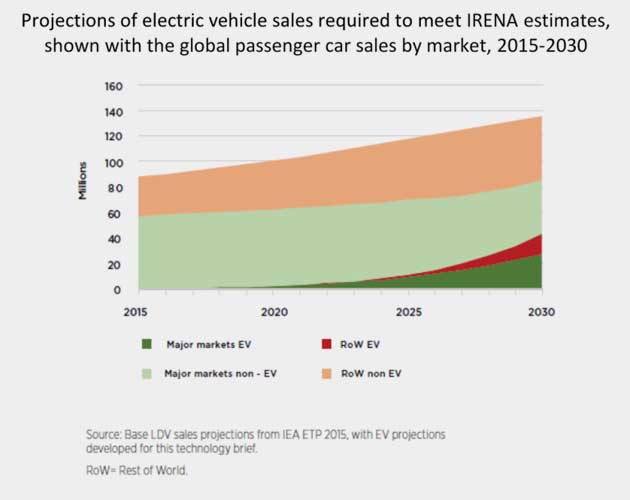 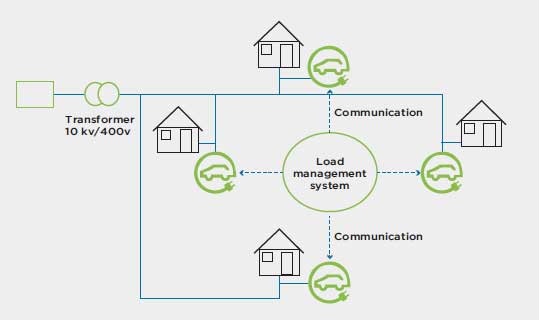